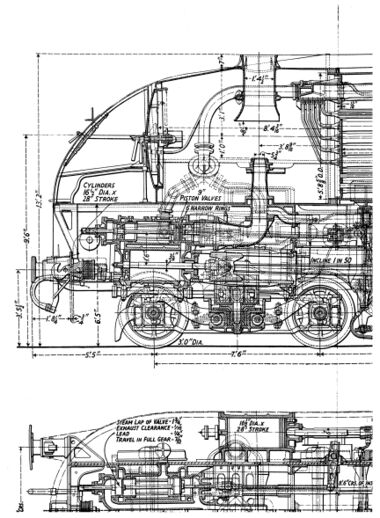 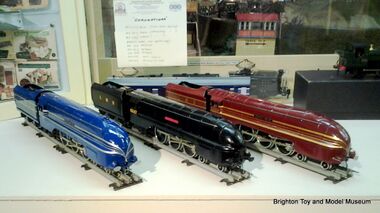 The streamlined LMS Coronation Class locos were introduced in 1937, and the first, 6220 Coronation, promptly broke the British speed record on her first public outing. They (and their "Duchess" variation) still hold the record for being the most powerful steam locomotives ever built for British track.

After the success of the "Princess Royal" Class passenger locomotives, LMS accepted that a larger, faster, more powerful "Super-Princess" was needed, and Stanier set to work designing it. Where the "Princesses" had been "pretty" locomotives that had achieved a degree of elegance, the new beefed-up versions would be larger and heavier, and approach the limits for the size of loco that could fit through UK tunnels and trackworks.

Originally referred to as the "Princess Coronation" Class as a reference to the earlier design, the "Princess" prefix stopped being used as it became clear that the new streamliners, hauling the Coronation Scot, had achieved a reputation and identity very much their own, and didn't need a reference to their parent design to "sell" them. After the first ten streamliners, Stanier insisted that the next locos would be built "as nature intended", as conventional-looking engines, before returning to streamlined casings for the next batch of fifteen. The non-streamlined locos (and later, also the de-streamlined Coronations) were so looked so different that they ended up with their own Class name, the "Duchess" Class.

The first of the LMS Coronation/Duchess Class of 4-6-2 locomotives was the streamlined 6220 Coronation (1937), and thirty-eight of the locos were eventually built, in a range of liveries, with and without streamlining. The main design was based on William Stanier's Princess Royal Class.

The first batch of five streamlined Coronation Class locomotives (numbers 6220-6224) were designed in tandem with the carriages for the Coronation Scot train, in blue with silver striping that started at a point at the locomotive's nose, and extended down the entire length of the train. The first of this batch of locomotives, Coronation 6220, gave its name to the class.

For the second batch of five engines (6225-6229), LMS decided to use a version of their own crimson livery, and also changed the silver striping to gold. A prototype set of new and more luxurious carriages in the new livery was built and sent to the US for promotional purposes, but the outbreak of WW2 meant that no more were built, and the planned crimson version of the Coronation Scot never went into service in the UK.

Although the locomotives were mainly designed by Stanier, the streamlining was designed by Tom Coleman in Stanier's absence, and Stanier later decided that the performance improvements given by the streamlined shroud at high speeds wasn't worth the extra difficulty in getting access to the engines for servicing. Later batches of the locos were mostly built without the streamlined fairing, and the existing streamlined locos started to be stripped of their covers.

The Coronation/Duchess Class steam locomotives were the most powerful ever built for the UK rail network, and they were fast, with Coronation breaking the existing 116mph British speed record by one additional mile per hour in 1937.

Although the streamlined A4 "Mallard" locomotive (1938) pushed this to 126mph the next year, fans of the Coronation Class point out that Mallard's record-breaking attempt was carried out in favourable conditions and that the locomotive needed servicing afterwards due to its tendency to overheat at high speeds, whereas Coronation 6220 couldn't run any faster because of the track quality, and didn't need any special servicing after its successful record-breaking attempt.