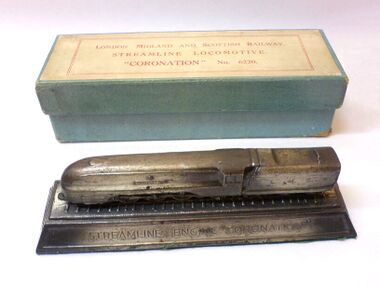 LMS paperweight of the Coronation Scot, side view, with box [image info] 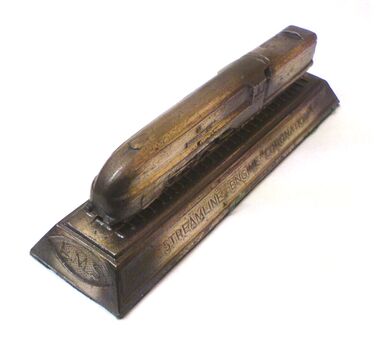 A small 5 1/2-inch cast white-metal paperweight of the streamlined LMS Coronation 6220 locomotive on a metal plinth, with its original box, by Bassett-Lowke for LMS.

As this is a promotional piece, the paperweight and its box don't carry any details of the manufacturer.

The paperweight is probably made from either plated pewter or "Britannia metal", and the locomotive and tender are cast separately from the base, and screwed together, which allows for finer detailing in the wheels and underside of the train.

The box is turquoise-blue with a wide-lipped lid, and a white paper label covering most of the top surface. It has a red printing, including a red inset double-border, and the words,