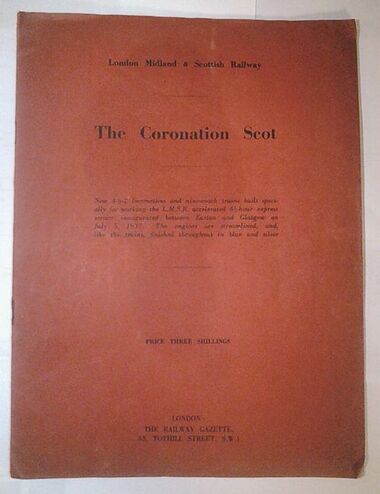 "The Coronation Scot", a special reprinting by The Railway Gazette from their May 28 1937 issue.

Although it's only sixteen content pages long (plus the red paper covers and a rather beautiful foldout sheet glued to the back cover), calling it a "booklet" doesn't seem adequate, since it's printed in a large "nine inches by twelve inches" format.

London Midland & Scottish Railway
The Coronation Scot
New 4-6-2 locomotives and nine-coach trains built specially for working the L.M.S.R. accelerated 6 1/2-hour express service inaugurated between Euston and Glasgow on July 5, 1937. The engines are streamlined, and, like the trains, finished thoughout in blue and silver

The publication contains descriptions of the locomotives and trains (with a couple of additional diagrams), a plan showing the top view of the size and interior layout of all nine coaches, large-format publicity photographs (at noticeably higher quality than usual) and photographs of the locomotive in various stages of construction.

The foldout section is a "blueprint" of the Coronation 6220 locomotive, without its tender, showing side, top and front views and is titled:

It measures around sixteen inches by thirty-three inches, with a partial bevel on one edge to allow it to fold back neatly into the booklet. Link title