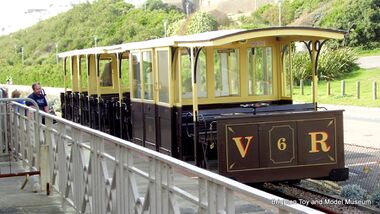 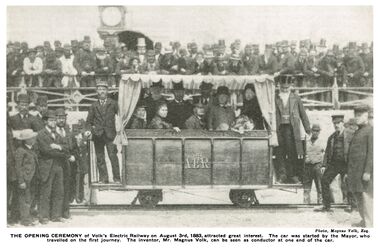 1883: "THE OPENING CEREMONY of Volk's Electric Railway on August 3rd, 1883, attracted great interest. The car was started by the Mayor, who travelled on the first journey. The inventor, Mr Magnus Volk, can be seen as conductor at one end of the car." Magnus Volk is on the left side of the coach, the gentleman in the top hat on the right is presumably Mayor Arthur Cox [image info] 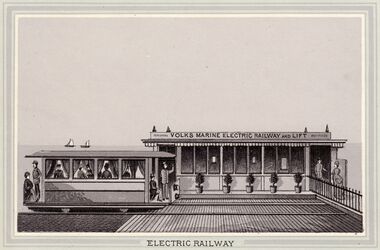 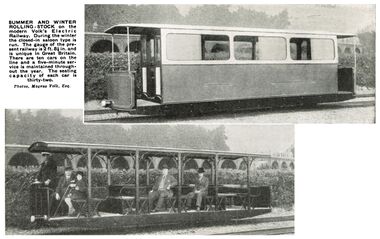 1935: "SUMMER AND WINTER ROLLING-STOCK on the modern Volk's Electric Railway. During the winter the closed-in saloon type is run. The gauge of the current railway is 2 ft 8½ in., and is unique in Great Britain. There are ten cars on the line, and a five-minute service is maintained throughout the year. The seating capacity of each car is thirty-two." [image info]

1935: "THE AQUARIUM STATION on Volk's Electric Railway. There are three stations on the line, which carries a average of over a million passengers a year." [image info] 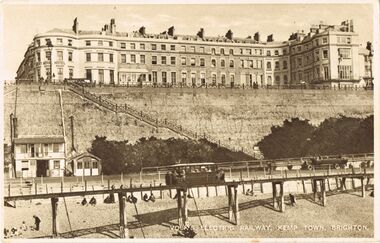 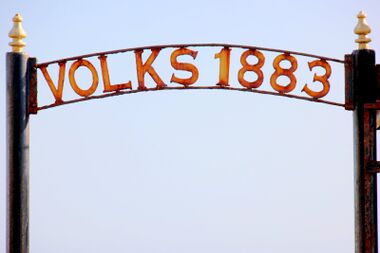 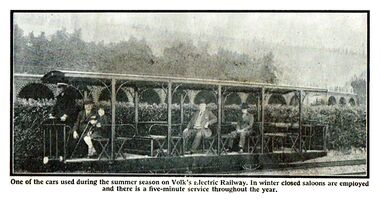 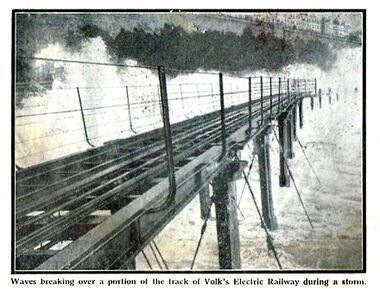 Waves breaking over the elevated and exposed Volk's Electric Railway track during a storm, Meccano Magazine 1937. Beach defences have since raised the height of the beach to match the height of the track. [image info] 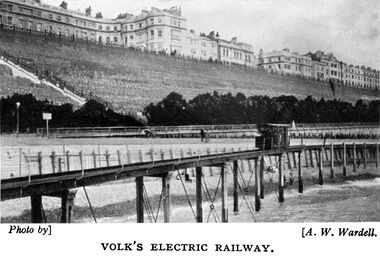 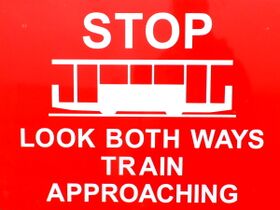 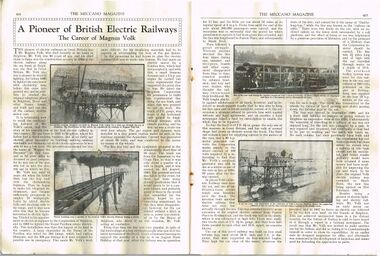 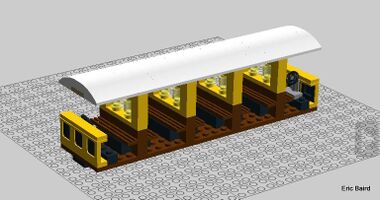 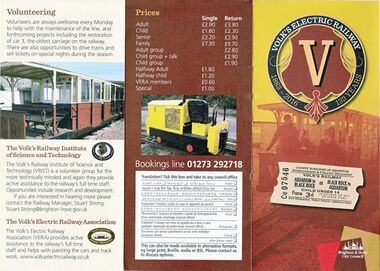 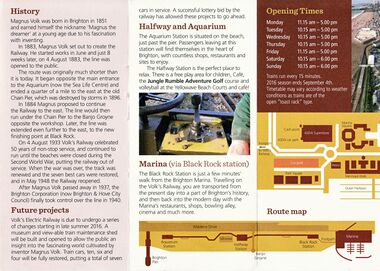 The Volks Electric Railway runs along part of Brighton seafront, and was opened in 1883. It is the World's oldest commercial electric passenger railway.

The railway was the brainchild of Brighton-based inventor Magnus Volk. It opened in August 1883, and originally ran between the Brighton Aquarium and the Chain Pier. It was later extended to the Banjo Groyne, and then further, to Black Rock Station (which is linked to Brighton Marina by a footpath).

The Railway was taken over by the Brighton Corporation in 1940, a couple of years after Volk's demise.

Riding on the Volks was originally a much more hair-raising experience, as the beach level was far lower, and the railway only managed to run at Promenade level thanks to a system of wooden bridgework that allowed it to run high above the beach, rather like a rollercoaster (except that the railway tended to run level ... except where it ducked underneath the Chain Pier).

Old photographs show the railway to be a rather alarming construction, with riders at high tide liable to be subjected to waves crashing into the Promenade wall below the railway track and dousing the carriages with spray.

When Brighton's beach defences were put in place, the beach level rose until it created the current "pebbly" beach whose top is practically level with the railway track. This tends to make it look as if the Volks Electric Railway was simply run along the beach, but the elaborate bridgework that originally supported the railways is still in place, buried beneath the pebbles.

On leaving the Aquarium we can avail ourselves of –

To take a run eastward and see something of the Madeira Drive and the Marine Parade above it. The railway is a modest little line running along the beach from the Palace Pier gates to the Black Rock, with an intermediate station at Paston Place. The cars hold from thirty to forty passengers and run every five minutes. The ride is very pleasant, as the cars command an excellent view seaward all the way.

ON August 3, 1883, the first public electric railway in England began to run. This was a line, about a quarter of a mile long, which extended along the sea front at Brighton, from the Aquarium to the Old Chain Pier. Fifty-eight years had elapsed since the opening of the Stockton and Darlington Railway in 1825, and hitherto the supremacy of steam had remained unchallenged; but that August day saw the first practicable application to railways of one of steam's most formidable rivals. Volk's Electric Railway is thus not only interesting in itself, but is also of considerable importance in the history of British railways.

That it was some years in advance of its time is shown by the fact that it antedated the City and South London Railway, the world's oldest tube railway, by about seven years.

The undertaking was the idea of Mr. Magnus Volk, who has remained associated with it for over fifty years. Mr. Volk's interests included pioneer work in connexion with the electric telegraph, the telephone, electric lighting, and electrically-propelled motor cars. But he is perhaps best remembered for his promotion of Volk's Electric Railway. Mr. Volk, who was Electrical Engineer to the Brighton Corporation, was responsible also for the Brighton and Rottingdean Extension, an electric line which ran through the sea at high tide. Both these lines will be described in this chapter.

The Volk's Electric Railway has carried over forty million people since its inception. In its present extended form it runs along the sea front near the Palace Pier to Black Rock, a distance of about one and a half miles. The track is slightly elevated above the beach, and at high tide it runs over the sea – a feature that gives point to the claim that it is "the only railway of its kind in England". There are three stations, each of which exhibits placards drawing attention to the unique character of the line.

The official opening day was August 3, 1883. During August Bank Holiday of that year, when the line was in operation for eleven hours, the single car in its possession is said to have carried about a thousand passengers and to have run an aggregate of fifty miles. As originally constructed, the gauge of the railway was only two feet. The small four-wheeled car was driven by current generated from a two horsepower gas engine, and ran at a service speed of six miles an hour.

Despite gloomy predictions as to its impracticability, the railway was a popular success from the first. The announcement of the opening of Volk's Electric Railway attracted large crowds of spectators, the more especially as it was expected that the car would not work. In this the crowd was disappointed, as when started by the Mayor, the car with a heavy load moved away easily and without a hitch.

Permission for the operation of the line had originally been granted for only six months, but this period was speedily extended. In the meantime the success of the undertaking had given rise to much local antagonism, especially on the part of the cabmen, boatmen, and persons engaged in the hay and corn-chandlering trades. Sleepers, signboards and other equipment began to develop the habit of disappearing overnight. Nature also took a hand; a series of violent storms wrecked the line four times in a single summer. Although the damage was at once repaired in every instance, the work added greatly to the cost of running the system. Mr. Volk's plucky fight, however, brought him both sympathy and offers of financial support, including the opening of a subscription list by a local newspaper that produced sufficient funds for the repair of the whole line. Thus Mr. Volk was enabled to keep the line open and to remain its owner, instead of abandoning it or handing it over to a company or public authority.

The original permanent way was composed of flat-bottomed rails weighing twenty pounds to the yard, and spiked to longitudinal sleepers. These measured ten feet by nine inches by three inches, and were coated with tar. Shingle was used as packing. The gas engine that furnished the power was set up in an arch under the roadway opposite the Aquarium, developed nearly three horsepower in working, and drove a self-regulating generator giving current at fifty volts. A machine of similar size, but with magnets and an armature arranged in series, was installed in the car as a motor.

From its earliest days, the railway attracted considerable attention in the press. A contemporary account refers to "the electric car, which (so Mr. Volk informs us) is a model of the interior of the deck saloon on a steam yacht; constructed of solid mahogany, plate-glass windows, a panelled ceiling with paintings of flowers and palms; blue silk curtains to the windows, mirrors, and so on. The exterior is precisely that of a first-class railway carriage,, with the exception that the footboards are protected by brass rails."

This description is not that of the first vehicle, which, as will be seen from the illustration on page 608, was hardly of so ornate a character. That was, however, scarcely to be expected, since the car, together with the dynamo and motor, was built, the generating plant installed, and the track laid, within eighteen days. This period must be regarded as remarkably short, when the pioneer nature of the whole work is borne in mind.

Despite the opposition of interested parties who feared competition, the Brighton Corporation – very soon after the opening – gave permission for an extension from the Aquarium to Paston Place. This was speedily followed by a further extension to the existing terminus at Black Rock. Between August, 1883, and the beginning of the following January, a total of about 300,000 passengers had been carried, and the volume of traffic showed that the railway, even in its short initial form, had definitely filled a public need.

In its present form the line, which is mostly single track, though equipped with adequate passing places, is laid on the 2 ft. 8½ in. gauge, being the only line in the kingdom constructed to that dimension.

The longitudinal sleepers have given place to the more customary cross sleepers, the running rails are of the Vignolles pattern, and the conductor third rail of channel section steel on earthenware insulators.

The original little vehicle has been replaced by a total of ten cars, some closed and some open. The latter are known as "toast racks", a design that greatly facilitates quick entrance and exit. The seating capacity of each car is thirty-two, but, since strap-hanging is allowed, as many as fifty people can be accommodated in a vehicle.

In spite of the small size of the undertaking, the line carries an average of well over a million passengers a year. It is a point of pride with the management that the five-minute service, which is maintained throughout the twelve months, has been operated for nearly fifty years. Moreover, although the purpose of the railway is primarily to cater for holiday-makers, it has also proved itself to be a valuable addition to the general traffic facilities of Brighton and Kemp Town.

The generating plant has officially been described as being situated "in a cave in the sea wall". The main equipment consists of a 90 h.p. motor generator converting the Corporation electric supply of 460 volts direct current to the track voltage of 160. There is also a small reserve 20 h.p. set. Two types of motor are in use, three cars being of the original Siemens link belt-drive type, and the rest of modern tramway pattern, with single reduction gear, and generating from 7 to 8 h.p. at 750 revolutions a minute. All the transmission gear is fitted with either ball or roller bearings. The original generator was still in use as a motor in one of the cars as late as 1934.

Since the Volks Electric Railway uses comparatively "open" carriages (and is exposed to the seafront), the railway shuts down during the Winter months, and its schedule is liable to disruption when weather is inclement.

Leaflets about the Volks Railway are available from the Museum's brochure racks.

Further information of the Volks Electric Railway is given in the organisation's free booklet (available from the Museum's Visitor Information Point), or online.

The following 38 files are in this category, out of 38 total.