From The Brighton Toy and Model Index
(Redirected from Aquarium)
Jump to:navigation, search 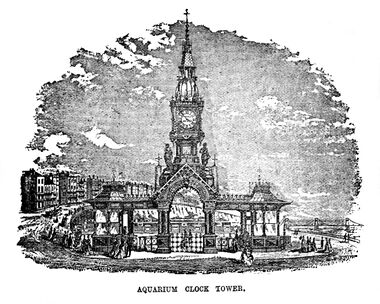 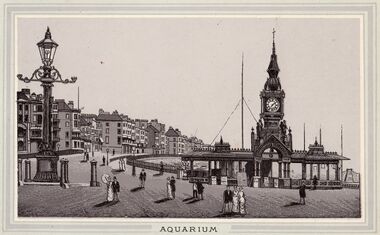 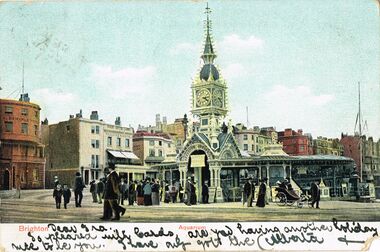 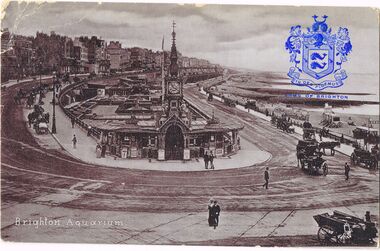 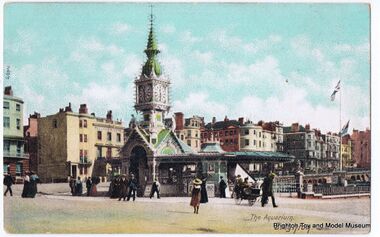 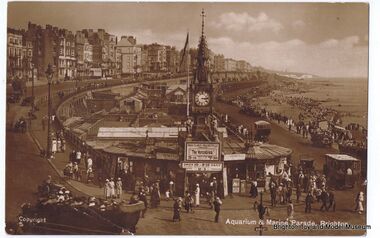 ~WW1?: The Aquarium, with Vaudeville sign announcing "The Versatiles". This name was used by the Concert Party of two combined bicycle battalions, the 1/25th London and the 2/6th Sussex [image info] 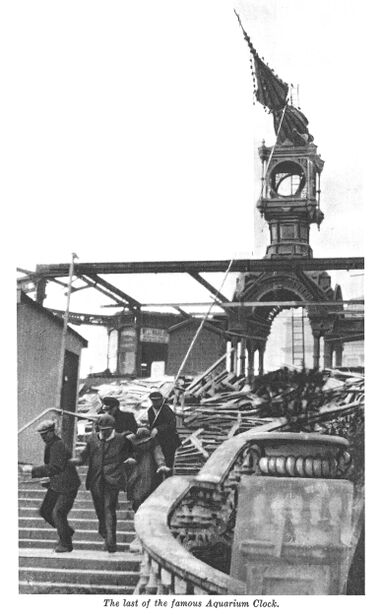 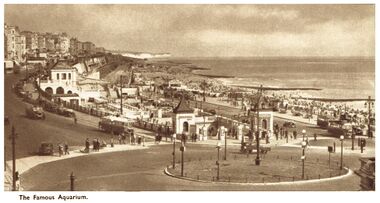 1935: New-look Aquarium and seafront, now without the clock [image info] 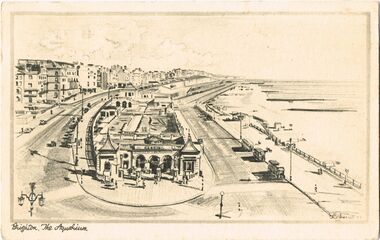 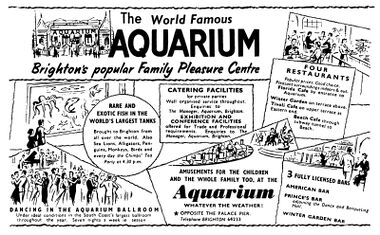 The Aquarium, Brighton was designed by Eugenius Birch, and was constructed in conjunction with the Madeira Drive extension to the sea-wall, starting in 1869. The Aquarium was completed in 1872 and opened in August of that year. The Aquarium was originally a private venture, but falling revenues resulted in it being bought by Brighton Corporation in 1901. It is now Brighton Sealife Centre.

Almost all of the building is underground as seen from the level of the road behind it, in order not to block the sea-view – Birch had originally wanted the Aquarium to be topped by ornate decorations, but this was refused.

The contents of the Aquarium have changed several times (for instance, it's no longer considered appropriate to keep dolphins there), and the buildings have been used as a venue for a variety of entertainments, including a cinema, concert hall and ballroom.

The upper, ground-level part of the site has had numerous refits and repurposings. A set of entrance gates topped by a large spiked-topped clock and surrounded by four statues representing the Four Seasons were added in a refit that started in 1874, and were later removed in a council refit in the late 1920s.

... the construction of the Brighton Aquarium may assuredly be looked upon in the light of a public benefit; for not only will it be a novel and delightful place of resort, and an inestimable boon to naturalists, but the expectation may be safely entertained, that the exhibition of marine animals, in a state of perfect health and beauty, will effectually eradicate apathy and indifference from the mind of the public in general, and establish, instead, feelings of interest and admiration, respecting the beautiful and marvellous creatures ...

We may regard the establishment of the Crystal Palace Aquarium as an important epoch in the history of the great public aquaria in this country. That at Brighton came into existence subsequently; although the Bill for it had been long obtained: and the fact that the latter paid a good dividend (always an important one) was sufficient to induce companies to start these at Manchester, Southport, Yarmouth and elsewhere. ...

The Brighton Aquarium is the largest yet constructed in England, and its interior is perhaps the most ornately fitted up, and varied with natural objects. The chief corridor (that which contains the aquaria proper) extends 220 feet. The tanks are placed on each side. They are of various sizes, the largest being more than 100 feet long by 40 feet in width, and holds 100,000 gallons of sea water, or nearly as much as that of all the tanks and storage reservoir, included, of the Crystal Palace Aquarium. Indeed, this huge tank is big enough for the evolution of porpoises, full-grown sturgeons,, sharks, sea-lions, turtles, and other large marine animals. The next largest tank is 50 feet long by 30 feet broad. Thus is placed immediately opposite the former. The total quantity of sea water contained in all the Brighton tanks is over 300,000 gallons, beside which there are storage reservoirs into which the salt water is pumped directly from the sea outside, which are capable of holding half a million gallons more. The salt water thus obtained, however, is liable to be very turbid. This huge quantity takes about ten hours to be pumped in. In the chief corridor above mentioned the number of tanks is twenty-one. The total frontage of all is about 740 feet. Octagonal table tanks are also exhibited, in which the rarer marine zoophytes, &c., are kept, and where the process of fish-hatching may be seen going on. 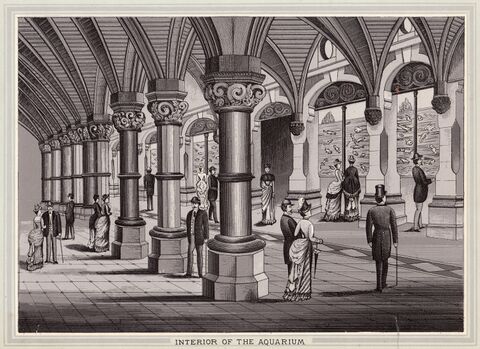 1888 engraving: "Interior of the Aquarium"

In 1922, Southdown Motor Services obtained approval from the council to turn the Aquarium into a bus station, but local outrage was so great that the application was defeated at the resulting local inquiry.

Once the Southdown deal had fallen through, the council decided in 1925 to modernise and refit the Aquarium, and David Edwards, the Borough Engineer and Surveyor, took on the work for the redesign.

The Aquarium was closed in 1927 to allow for the overhaul, which included the removal of the rather gothic clock from the entrance, and the creation of spaces that could be used for a wider range of public recreation activities (such as ballroom dancing and indoor bowling), and reopened in 1929. The new design included a new entranceway and the creation of a "miniature golf" course on the roof.

Opened in 1782, during a visit of the British Association, the old Aquarium had a chequered existence from a financial standpoint, though – until the opening of the Aquarium at the Regent's Park Zoo – its collection of living marine objects had scarcely been rivalled in the kingdom, or even in Europe.

The new building contains commodious tanks, a large concert hall, rifle range, café, restaurant, refreshments rooms, hot and cold salt and fresh water baths for gentlemen, lavatories and cloak rooms, two fine Sun Terraces with bandstand, a shelter, and shops. The building houses a permanent aqua-marine exhibition. Every tank is labelled with the familiar name of the fish it contains, so that the various kinds can be easily identified. Some of the tanks are of great size, one being 110 feet long and capable of holding 110,000 gallons of sea water.

The sea water is pumped by steam power direct from the sea and stored in underground reservoirs capable of holding 500,000 gallons, from which it is forced into the tanks. The tanks are not often emptied, it having been found advantageous not to renew the sea water, but they are occasionally filled up to repair the loss by evaporation.

Recently the aspect of this part of the sea-front has been still further changed by the construction of a subterranean Amusement Park below the promenade facing the Aquarium. At all times the roadway is busy with cars, buses and coaches.

AQUARIUM (on Sea Front). 'Phones Brighton 2094-5. This world-famous institution offers a wide range of entertainment to young and old. A description of its attractions falls naturally into four sections:–

In addition to the Cafe Restaurant on the Sun Terrace, there is a commodious and well appointed Restaurant at the foot of the steps leading from the Sea Front to the main entrance of the Aquarium.

For the convenience of visitors, a subway has been constructed, giving direct access between the Aquarium and the Beach, thereby obviating the necessity of crossing the wide Madeira Drive.

Aquarium Entertainments Ltd. took over the Aquarium in 1955, and started looking at ways of creating new attractions on the site.

From 1961 to around ~1968 the Aquarium ballroom housed the Brighton Motor Museum, a satellite of Lord Montagu's museum at Beaulieu.

Dolphins were introduced in 1967, and a full-blown Dolphinarium was completed in around 1969, replacing the Motor Museum.