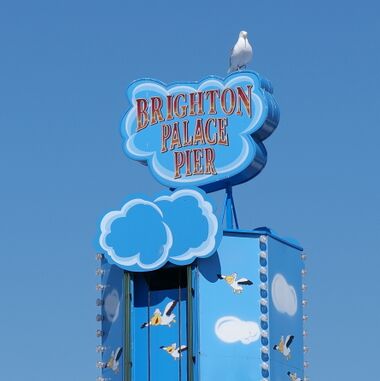 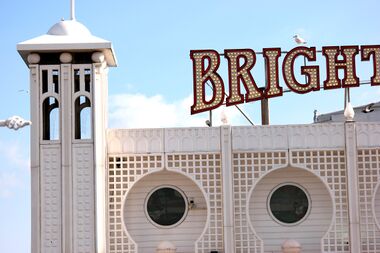 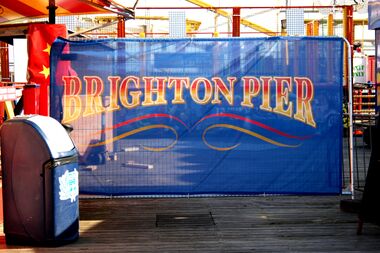 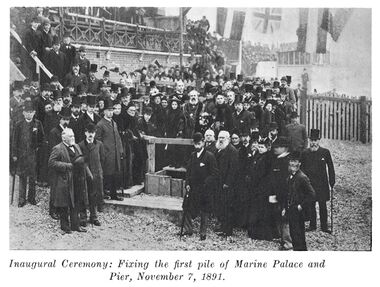 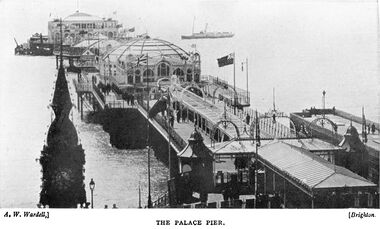 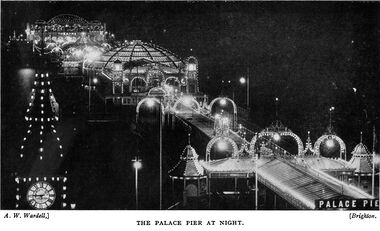 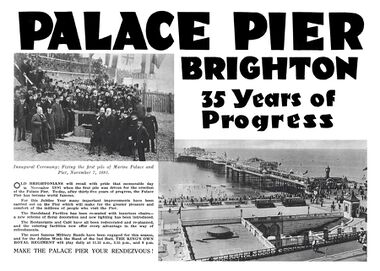 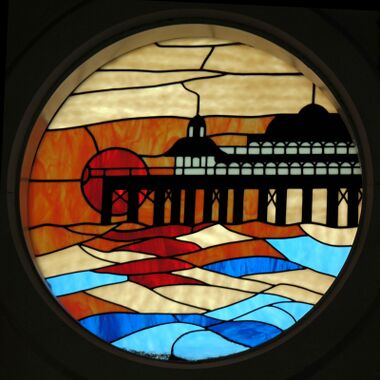 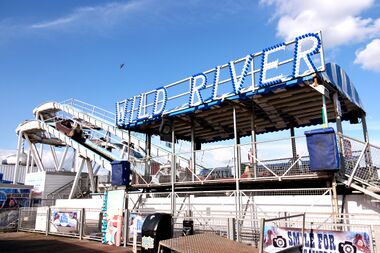 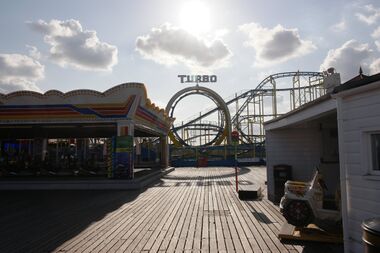 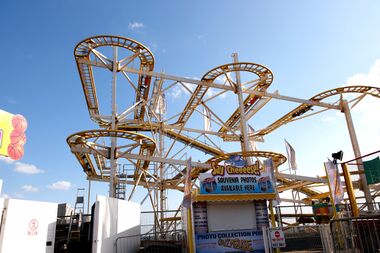 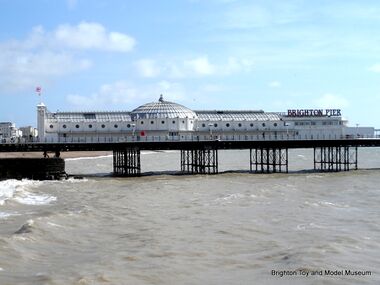 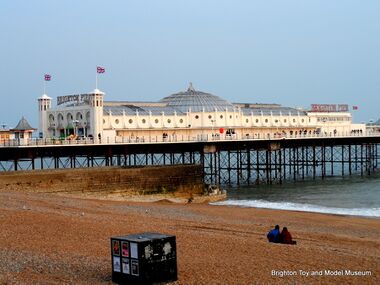 Brighton's "Palace Pier" (1899-) is the last surviving intact pier on Brighton's seafront. Built in 1899, it was designed as the replacement for the older, more utilitarian Chain Pier that used to be slightly to the East, and is reckoned to be Britain's most popular pier. The pier acquired new owners in 2016

The main pier building has a lovely dome, and stained-glass windows along the sides showing Brighton-related images. It's totally free to walk along the pier and look at the Brighton scenery, and the pier is a great way to see the Brighton seafront(s).

The Brighton Marine Palace and Pier Company was founded in 1888 with the intention of building the new pier, and bought the slightly decrepit Chain Pier in 1889 for fifteen thousand pounds, with the intention of demolishing it when the replacement was ready. Designed by R St. George Moore specifically as a "pleasure place", work was underway by 1891, but funding issues slowed the work, which was dealt a major blow by the Great Storm of 1896 which convincingly destroyed the Chain Pier and also temporarily took out the Daddy Long-Legs seagoing extension to the Volk's Electric Railway.

Wreckage from the Chain Pier battered against the piles of the Marine Palace Pier, causing significant damage and invalidating the original costings for the projects, and for a while, work on the pier stopped. It eventually had an opening ceremony in 1899, and was completed in 1901, with its construction timescale of ten years setting a record at the time for this sort of building.

The set of buildings at the Pier entrance include two kiosks salvaged from the old Chain Pier, and the entrance is topped by the clock that used to tower above the entrance to the Aquarium.

The most controversial episode in the pier's history was probably its then owners renaming and rebranding in ~2000 as "Brighton Pier". Brighton locals were upset at the apparent attempt to erase the history of the other Brighton piers (especially as in 2000, the West Pier was still expected to be renovated and reopened). Locals became resigned to the fact that the "Brighton Pier" lettering was unlikely to change (and is actually pretty good), but still made a point of referring to it as "The Palace Pier", as a matter of principle.

After the pier was sold in (find exact date), the new owners announced that the were seriously considering reverting to the pier's historic name in deference to local opinion. In the Summer of 2018, the company kept their word and rebranded the pier as Brighton Palace Pier, complete with new illuminated signage.

By 1890 the Chain Pier was becoming aged, and, with a view to its ultimate removal, it was sold in 1891 to a Company formed for the construction of the Palace Pier. The first pile of the new pier was driven in 1891, but, through difficulties, the pier was left in a half-finished state ...

For years the skeleton of the Palace Pier, with its wooden hoarding shutting it off from the Promenade, constituted a grievance that was keenly resented. With the Royal Albion Hotel opposite falling more and more into dilapidation, the approach to the marine front had quite a depressing and poverty-stricken appearance. These were bad days for Brighton. 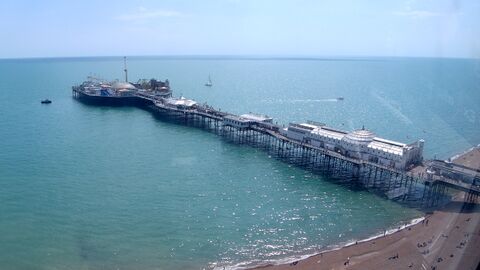 Aerial view of Brighton's Palace Pier, as seen from the Brighton Wheel

This is a structure of great elegance, painted white throughout, and decorated with festoons and arches of open ironwork. There are a number of shelters, and at the head is a handsome Theatre. It was opened in 1901 and reconstructed ten years later. Here high-class concerts, dramatic performances and other entertainments are given daily in the season. The auditorium will seat nearly 1,500. The waggon roof has a single arched sweep, and there are no pillars or other structural features to impede the view. The seats are planned in a flattened half-circle in front of the stage, each line a tier above the one in front, so that from the back there is as clear a view as from the front. The chief promenade is at the back of the hall, and thus at the highest level. The stage is the largest in Brighton. In other parts of the building are shops, refreshment-rooms and reading-rooms, and on the roof is an open-air tearoom.

When the pier is illuminated at night, and every arch, turret and pillar is outlined by means of electric lamps, the effect is very fine, no fewer than 14,000 lamps and 100 arcs being used.

At the pier-head is a three-deck landing-stage, at which all the excursion steamers call, as well as at the West Pier.

A short distance from the entrance is a Winter Garden, capable of seating 2,000 persons, and used in summer for a variety of purposes. Between this building and the pier-head is a capacious Concert Hall. Service bands play daily.

PALACE PIER. The finest Pier in the World. Opened 1901. 1710 feet in length. Attractions include Theatre (No.1 Companies), First-Class Army Service Bands, Open-air Dancing, Palace of Fun, with all the latest games and automatic machines of amusement, Fully Licensed Bars, Restaurant and Cafe. Sun Lounge on Theatre Roof. Parties up to 1,000 catered for. Good Fishing. 'Phone Brighton 3725