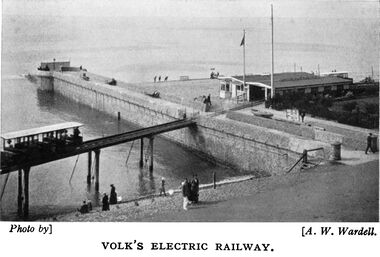 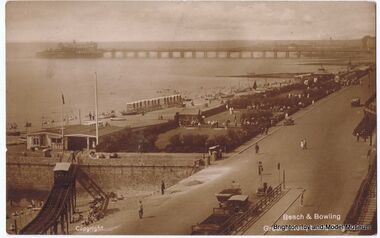 Banjo Groyne and the Volks Halfway Station. Note the lower level of the beach [image info] 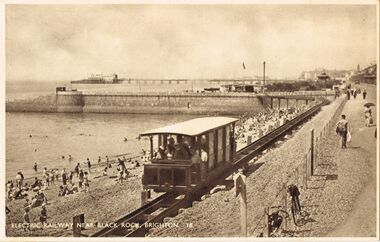 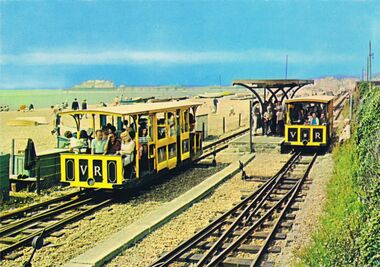 Postwar: "BRIGHTON'S SEAFRONT ELECTRIC RAILWAY" / "'Volks' Railway' is Britain's first electric railway and now runs from the Aquarium to Black Rock Swimming Pool – a distance of 1¼ miles along Brighton's magnificent seafront"
This view is to the west of Banjo Groyne, looking further west, with the greenery on the right belonging to the Peter Pan's Playground miniature golf course. [image info]

The Volks Electric Railway's Halfway Station is, as the name suggests, the station in the middle of the line, between the termini at The Aquarium Station and Black Rock Station. In the past it's also been known as Paston Place Station and the Peter Pan Playground Station.

The station is conveniently close to the Madeira Lift for anyone who wants to go directly to/from Kemp Town without navigating sets of steps.

The Station's central stop was apparently closer to the original central shed site, but after World War Two (when the platforms were removed), rather than rebuild on exactly the same location, they put the new version of the station a little further to the West, where it would be more convenient for the Peter Pan Playground.