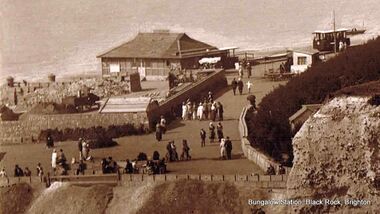 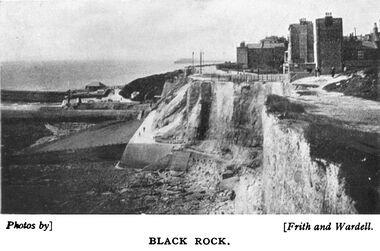 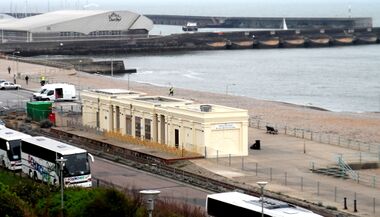 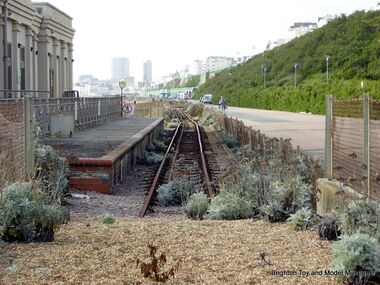 The Volks Electric Railway's Black Rock Station is the furthest part of the line from the Palace Pier, and is close to Brighton Marina.

The "Bungalow" station at Black Rock was built in 1911, and added something rather more substantial to the existing platforms.

The "bungalow" station was demolished and the line shorted to make way for the Black Rock Pool (1936).

While some people have complained that the current slightly monolithic neoclassically-styled building housing Black Rock Station is big and clunky, and not art deco, not everyone realises that the building's primary purpose is as a functioning wastewater pumping station.

Brighton's sewerage system output goes via Black Rock and the Marina to Peacehaven where the contents are treated before being sent down a long outlet pipe into the sea (the system was recently upgraded with a new sewage processing plant at Peacehaven). Under the beach at Black Rock is a giant (150 million litre) storage tank designed to cope with the result of storm floodwater surging through Brighton's sewers, that acts as a buffer and stops the system from being overwhelmed (and means that the overflow doesn't have to be sent out of a Brighton pipe, potentially contaminating the beach).

The works for constructing this underground tank and system were built in the 1990s alongside the then station, and once the works were completed, the railway got to use the furthest part of the new pumping station building as the new Black Rock Station.