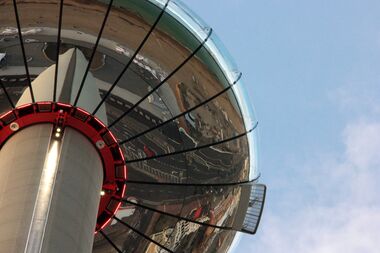 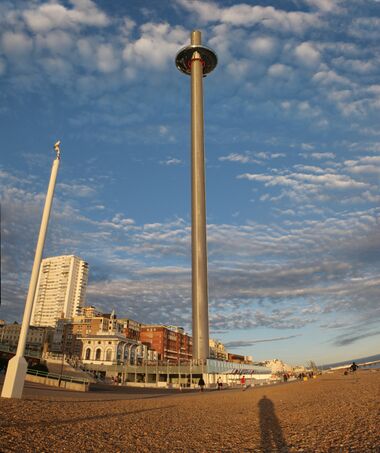 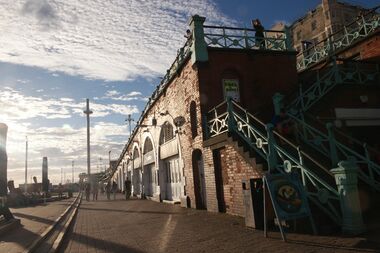 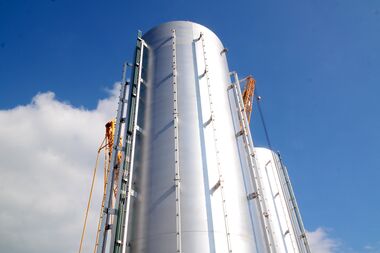 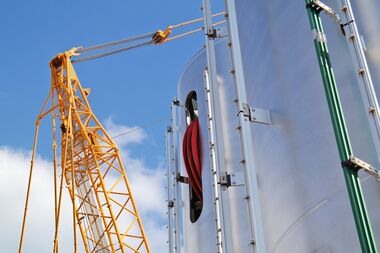 The i360 is a futuristic-looking observation tower on Brighton's seafront, which opened in Summer 2016. The i360 is designed as a tourist attraction and is built at the "landfall site" for Brighton's old West Pier.

The i360 was designed by Marks Barfield, the architects who created the famous London Eye observation wheel on London's South Bank. The design consists of a vertical steel welded tube, with a doughnut-shaped observation platform that climbs up and down the central shaft. The idea for the tower has been described as a "vertical pier", referencing the site's original association with the West Pier. 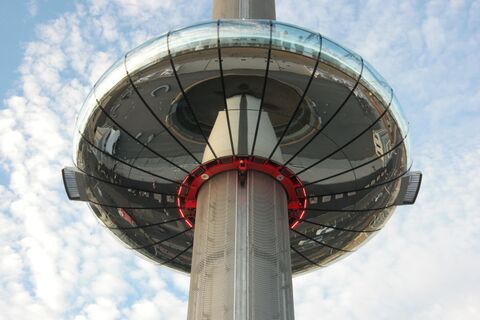 Construction of the i360 was initially beset by delays due to finances, as the banking crisis caused backers to withdraw from new projects. While there was originally talk of trying to have the tower built in time for the London Olympics, the construction date slipped to the end of 2013, and then 2014. Once funding was finalised, work on the site started pretty much immediately, the site's infrastructure was put in during 2014/15, and the tower "pole" went up very quickly, as planned. The pod was assembled and tested through early 2016, and the tower went into service in 2016. 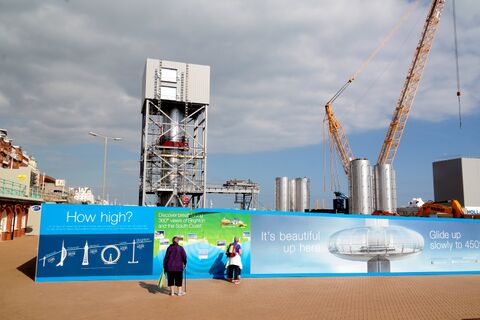 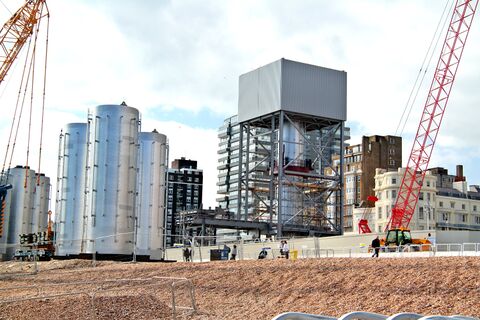 2015: Sections delivered by barge, being moved on-site by crane 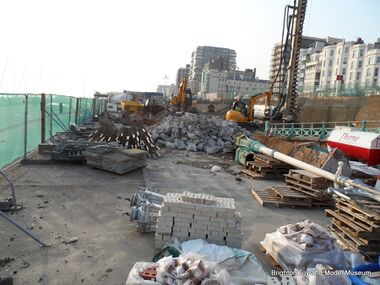 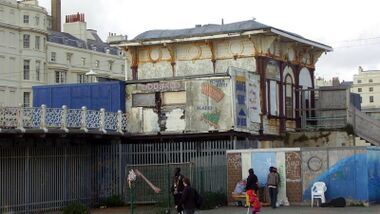 The subject of the i360 has fiercely divided Brightonians.

Proponents also say that no public money is being spent, so it's not an issue of taxpayer money being wasted if the project fails. Detractors point out that the plan is based on a development agency loan given to the council, which then used this to fund its investment, and if the project was built and then went bust, the Council would probably be expected to step in and spend public money to save the project. Proponents say that the business plan looks good, that here are economic benefits to the city and the council that go beyond a simplistic commercial funding model, and that even if it "went bad", the council would be able to get its money out first.

The Brighton Wheel was be dismantled in early Summer 2016, before the i360 launch, it's temporary licence having expired. The Wheel was also controversial when it was first put up, with some Brightonians complaining about the architectural clash between it and its surroundings, and how it would bring the "wrong sort" of people into Brighton. Although the Brighton Wheel's design was somewhat generic, the Wheel became an instant landmark and addition to the Brighton skyline, and now that it's gone, people are already missing it. It's possible that people's attitudes to the i360 may undergo a similar metamorphosis once the i360 has opened, tourist traffic has increased, and the locals have become used to it.

Marks Barfield: the architect as modelmaker

David Marks and Julia Barfield are the husband-and-wife team that produced the iconic, radical and much-copied "London Eye". The couple met when both were at the Architectural Association School of Architecture ("AA") in London, and with the architectural profession going through one of its characteristic cyclical slumps, with a shortage of projects to design for, the pair stayed in the industry by working for Richard Rogers, initially involved in architectural modelmaking.

When the Millenial competition to design a new London landmark was announced they came up with the basic design for the London Eye, and having produced a design that they loved, once the competition announced no winners, they decided to push ahead anyway and try to get the thing built themselves.