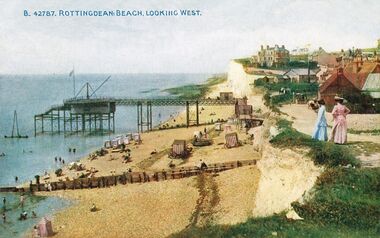 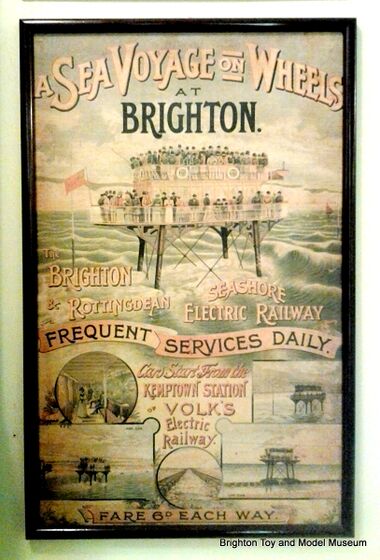 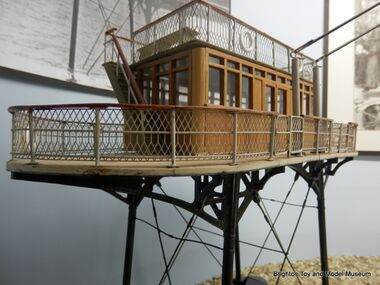 An accurate model of the Daddy Long-Legs' "Pioneer" car, on loan to the Museum [image info] 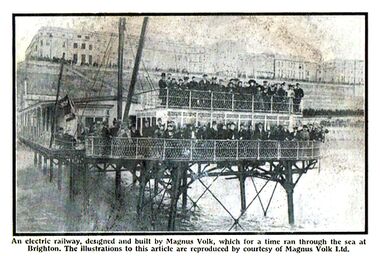 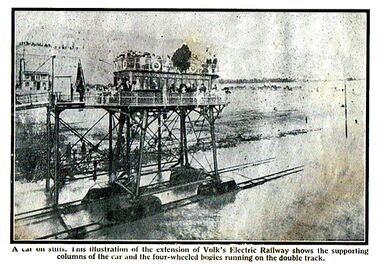 The Brighton and Rottingdean Seashore Electric Railway (a.k.a. the "Daddy Long-Legs") was a seagoing electric railway designed by inventor Magnus Volk that briefly ran along a section of Brighton coastline, linking Brighton's existing Volks Electric Railway with Rottingdean.

The aim of the railway was to extend the reach of the existing Volk's Electric Railway eastward. Since the eastern section of coast ran out of seafront, and quickly ended up with cliffs that were directly against the sea, Volk was confronted with the intimidating and costly prospect of an expensive project to build the railway extension onto the cliff-face.

Volk's solution was instead to build the railway out at sea, with the electrically-powered car built on four cross-braced stilted legs that kept the passenger section well above sea-level, and to also build a special alighting-platform at Rottingdean.

The railway's only car, the Pioneer, was a cross between an electric tram and a mobile section of pier. Its engineer was R. St.George Moore, who went on to design the Palace Pier.

Th Pioneer picked up its power from an electrical overhead cable, which powered four electrical motors fixed to the underside of the car's main platform. These powered rotating driveshafts built into the hollow cylindrical legs, which in turn powered the wheels via bevel gears.

For stability, each of the the Pioneer's four legs sat on top of a shrouded, weighted pugs, with the left- and right-hand sets of pugs each having their own two-rail track.

Construction started in June 1894, and the railway was opened in late November 1896.

After the railway had only been open for a couple of weeks, a a particularly vicious storm in early December 1896 (which also completely destroyed the Chain Pier) wrecked the Daddy Long-Legs’ landing stage and overturned the car. Volks managed to get the line and infrastructure rebuilt and the railway reopened in July 1897.

However, The Brighton Corporation then decided that Brighton's sea defences needed to be strengthened, and started work in January 1901 on extending the set of "groynes" that provided the Brighton region's coastline with some protection from erosion. Groynes are walls that extend out to sea to slow the sideways drift of sand or pebbles, and these new barriers intersected the railway track.

That was the end of the railway, and the railway's single car, Pioneer, was eventually sold for scrap in 1910.

This extension, which received Parliamentary sanction in 1893, can best be described as a line whose tracks were laid on the shore, so that they were submerged at high tide, while the car, which resembled the midship portion of Thames pleasure steamer, was supported by a combination of stilts and runners. At the time of its inauguration the Rottingdean line was generally known as the "railway on stilts". It was planned to begin near Paston Place, and thence to proceed "along the beach and foreshore on the level between high and low water mark at a distance of about 100 yards from the cliff to the village of Rottingdean, terminating at a point on the seashore immediately to the westward of Rottingdean Gap". A jetty or landing stage was provided at the Rottingdean end. This extended into the sea a distance of about 200 ft.

The idea underlying this unique method of construction was that by taking the line a sufficient distance from the cliffs "a fine view of them would be obtained by the passengers". The gauge of the Brighton and Rottingdean Seashore Electric Tramroad, to give it its full title, was 18 ft. This is not as formidable as it sounds, since there were two parallel tracks, each of the same gauge (2 ft. 8½ in.) as the present railway, laid at a considerable distance apart. The passenger accommodation was arranged in two tiers; on the lower level an enclosed saloon was surrounded by a four-sided railed platform; the saloon itself was surmounted by a railed deck. H.M. King Edward VII, when Prince of Wales, made a journey on this unique railway, and the fact was recorded by a brass plate in the saloon.

The length of the line was about two and three quarter miles, and at high tide the car moved through 15 ft. of water. The work of construction began immediately Parliamentary sanction had been obtained, and was carried on continuously, despite morning and evening tides. During the winter in which operations were undertaken, construction was greatly hampered by intense cold, which caused the sea water to freeze on the groynes that are so characteristic a feature of this part of the South Coast.

It would, of course, have been out of the question to lay the tracks on wooden sleepers, and, as the bed-rock is chalk, the rails were laid on concrete blocks. These were formed by cutting square holes in the chalk, pouring in the concrete, and boxing it round until each block stood at the necessary height above ground. The rails were fastened to these concrete blocks, which were spaced at intervals of 3 ft., by means of steel clips and bolts; So that cars might run over a track of the maximum security, stability was assured by the lavish provision of fish-plates and tie-rods.

The car, which had accommodation for about 160 passengers, was 50 ft. long and 22 ft. wide. According to a story current at the time, the Corporation of Brighton refused to grant a licence to the undertaking unless the structure carried a lifeboat. The vehicle was accordingly provided with a lifeboat to meet the requirement.

The four legs, or stilts, on which the vehicle was supported were steel tubes, through which passed shafts acting on the wheels. Two of these shafts, which were actuated by bevel gearing, conveyed motion to the wheels, while the other two worked the brakes. Each of the legs terminated in a four-wheeled bogie, shaped rather like an inverted rowing-boat, and having in front a metal contrivance for keeping the rails clear of sand, seaweed, and other obstructive matter. Two of the bogies ran on one of the two tracks; the other two ran on two parallel tracks. The bevel gearing was encased in grease boxes, with the dual object of ensuring adequate lubrication and keeping out the sea water. Each driving bogie was actuated by a separate electric motor, situated on the main deck of the vehicle, and current was fed to the motors by overhead wires, the construction of which caused considerable controversy at the time. The current was generated on the Rottingdean pier terminus, the plant furnishing 120 h.p. at 500 volts. The Brighton terminus consisted of a jetty, with waiting-rooms for the accommodation of passengers. The bottom of the car was some 23 ft. above rail level, and the vehicle weighed about 36 tons with motors, and could travel at six miles an hour.

After the approval of the Board of Trade had been obtained, the line was opened in September, 1896. It attracted considerable attention in the Press. One journal, which referred to the attractions of "a coasting trip, without the terrible internal disturbances by which such aquatic jaunts are not infrequently accompanied", characterized the undertaking as "about as fin-de-siecley as anything that can be imagined". Another newspaper, in a leading article called "Trains on Stilts", asked its readers to "consider the possibilities and potentialities of this astonishing railway", which "will, of course, revolutionize sea travel as the locomotive revolutionized land travel. In a short time we may expect to see a railway running from Dover to Calais ... and later on, when experience has bred confidence, will be opened the London, New York, and Melbourne Railway on Stilts. ... The great ocean liners reduced to mere cargo boats, will be crawling along to port and starboard, .. steering by the light of our flying windows". This enthusiastic leader-writer even went so far as to predict the construction of railways on stilts to "the moon, Mars, and other outlying places on the firmament", and "the sun himself will have a trunk line".

Unfortunately, these predictions failed to materialize, and the Brighton and Rottingdean Tramroad itself had only a short life. Shortly after its opening it was badly damaged by the gale that destroyed the Old Chain Pier. The promoters were, however, not daunted by a mishap on the possibility of which they had no doubt reckoned, and the line was repaired and reopened. Changes in the seashore, however, eventually put a stop to working, and the track had to be taken up.

So ended the life of a railway that remains unique in the history of transport. But it has been pointed out by Mr. Volk that the construction was of a purely experimental nature, and that if the money had been available for an improved type of car, much better results would have been obtained.