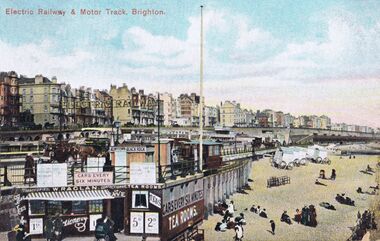 1906 (postmark): With one very early motor car, all other vehicles are still horsedrawn. This is NOT the outcrop that held the Brighton Wheel, that was built later, further away ... this is almost next to the pier. [image info] 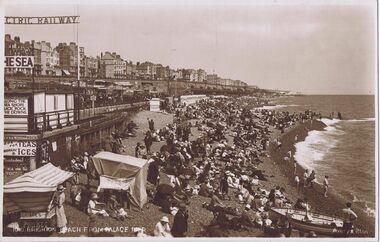 Late 1920s: "ALONG the SEASHORE to BLACK ROCK and THE DOWNS". This probably refers to the Volks connecting tourist bus sightseeing service from Black Rock, Downland Cars, which started in about 1925 [image info] 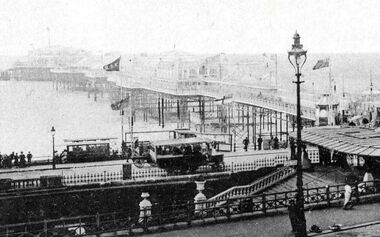 1920s?: Photo is pre-1933, but not extremely early, due to the petrol-engined vehicle. Behind this we can see (from right to left) some sort of walkway leading out from the pavement, perhaps a noticeboard, and then a narrow "station halt" type arrangement for people to stand under a narrow roof to wait for the next car. In front of this there is a Volks carriage. Any ambiguity as to whether this is really the Volks Aquarium Station is eliminated by the "VER" flag flying from the flagpole. Note that this is hardly separated from the pier: it's parallel to the steps going down into the Aquarium, and the beach-level passageway from the Aquarium would seem to be fractionally East of the Station. [image info]

The Volks Electric Railway's Aquarium Station has been through rather a lot of versions since the original station opened in 1883. It started life in 1883 as the "Aquarium Station", became the "Palace Pier Station" in 1899 with the imminent opening of the Palace Pier (which had been intermittently under construction since 1891), and then in the early 1930s, when it was moved further away from the pier, reverted to once again being called "Aquarium Station".

The first version of the station seems to have been a rather primitive affair, and this would have been either moved or replaced when this end of the line was shortened in the early 1930s.

Madeira Drive was widened in about 1933, and the "Pier" end of the Volks Railway shortened, with the Aquarium Station moved to around its current position, further away from the pier, at the tail end of the Aquarium rather than the Aquarium entrance. This has been said to be due to the council's plan to build a pool next to the Pier, although this ended up being built at Black Rock, instead.

Just prior to 2017, the station was a rather cheerful little wooden yellow and brown ticket booth and refreshments shop, with a metal "VOLKS 1883" metal arched entranceway.

After a shutdown for about a year, the reopened version of the station is now much larger and actually houses passengers as well as staff. Where the previous station was essentially a ticket booth, the new structure, although it looks from the outside like a couple of staggered oversized garden sheds, is actually quite nice inside.

As well as giving passengers somewhere to shelter from the elements while they wait for the next Volks departure, it has seating, a large table for children's activities, a large window to give wide views of the seafront, and a set of displays explaining the history of Magnus Volk and the Volks Electric Railway, which can easily take up a pleasant ten to fifteen minutes.