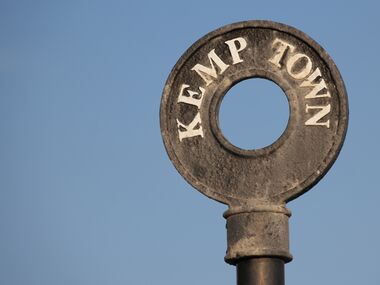 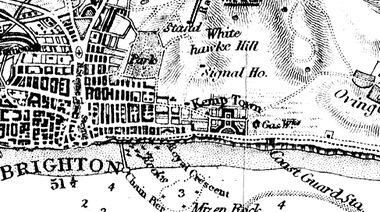 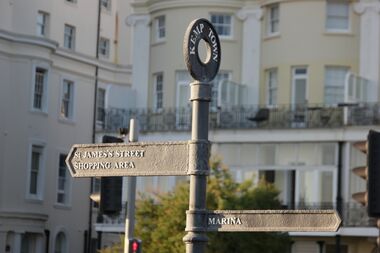 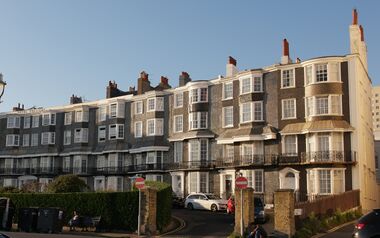 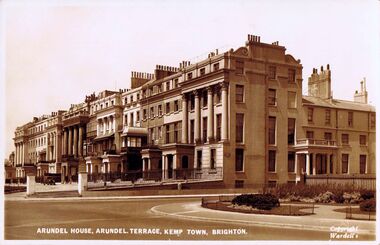 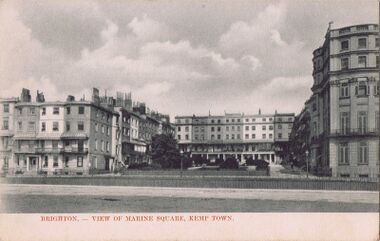 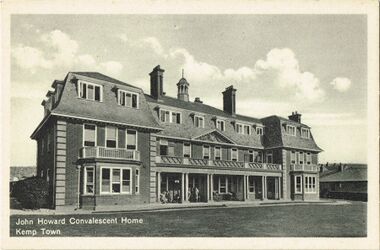 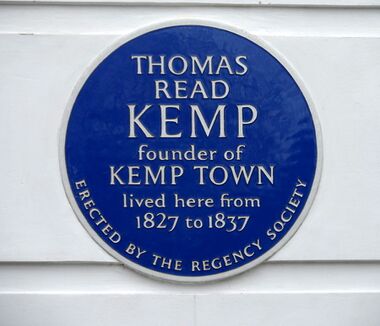 Kemp Town (or Kemptown, occasionally contracted to Kempton) was a development of houses for the wealthy, to the West of the original town of Brighton, created by Thomas Read Kemp. The development was instrumental in upgrading the seawall (Kemp didn't want his new houses falling into the sea) and improving the facilities along the bottom of the seawall cliff.

Between the Gas Works and the Royal Crescent, various large, respectable, and elegant mansions have recently been built, including Warwick House, Marine Square, Bloomsbury Place, and Burlington House. The foundations also are laid, and the eastern wing nearly completed, of an extensive range of Building, about mid-way between the above dwellings and the Gas Works. This range is intended to comprise 104 large houses, including a Crescent, with wings, fronting to the sea, and opening, northwards, into a spacious square.

Cheerful lawns, and grass plats, with good carriage roads and other attractions for the superior classes of society, are comprehended in the design; which is so contrived as to admit of a very considerable and corresponding extension of elegant buildings, should those which are now in progress answer the expectations entertained. The frontage is about 500 yards in extent.

The elevations will be varied in parts, as to architectural character, though preserving a general uniformity as to the whole. Columns, pediments, porticoes, and other ornamental dressings, will render the appearance of these edifices equal, if not superior, to that of most of the private houses in Brighton; and from the eligibility of the situation, this will, doubtless, be soon increased into a fashionable and attractive neighbourhood.

The demand for houses has led to the extension of the Town on all sides, especially eastward, where a second Town is now erected, on the estate of Thos. Read Kemp, Esq. about a quarter of a mile from the extremity of the Marine Parade, on a site of ground called Black Rock. It forms one of the most complete, elegant, and splendid arrangements of private dwellings in the United Kingdom, and to it the public voice has appropriated the founder's name. The whole having a southern aspect, includes a square of much greater extent than Grosvenor Square, London; expanding from the centre of a Crescent, whose space is 800 feet, which exceeds the Royal Crescent at Bath 200 feet at least, and terminates at the eastern and western extremities in wings of 350 feet each. In front the houses are elegantly adorned with columns, pilasters, and entablatures of Corinthian order, surmounted by balustrades of corresponding Architecture. This extensive Crescent or Square, which is railed round with cast iron, contains inclosures and pleasure grounds of many acres, which are now being laid out with walks, lawns, and plantations, from new and elegant designs.

This range of buildings exceeds three thousand feet in extent, with a stone pavement in front, wider than that in Portland Place, London. Along the cliff is a wide road, on the south side of which a sloping bank for steps has been cut through the cliff, which descends fifteen feet to an Esplanade now forming, which will command one of the most beautiful and sheltered prospects of the channel, that can well be conceived; and in addition, an Esplanade still lower, on the principle of the one attached to the Chain Pier, will stretch along the base of the cliff, which is at this place more than sixty feet high, and nearly perpendicular. To the lower Esplanade one ingress is by a gradual descent from the Marine Parade, and another by a tunnel cut through the rock, from the centre of the lawn in Kemp Town, which is purposely for the accommodation of the inhabitants of this elegant place. The spot itself seems as if formed for the execution of some vast project; the lofty cliffs rise abruptly from an almost level beach, and the gradually shelving land to the north, presents the summit of one hill above another in succession, resembling an extensive marine amphitheatre; so powerfully has Nature lent her aid to promote the general architectural effect, in forming one grand design, of which it may be said, there does not require an addition to heighten its beauty.

In the rear of the Town, the ground is divided into suitable parts for the convenience of stables, streets for shops, and squares of a minor order.

The rapid progress in building Kemp Town has raised the value of the intervening landed property beyond all precedent; and the whole is now covered with buildings, nearly finished. A new and spacious Chapel of Ease is also erected, pursuant to a late Act of Parliament. The buildings of Major Russel, and other gentlemen of fortune, on this spot are very extensive, and involved an expenditure of, at least half a million.

Kemp Town one of the most magnificent ranges of private dwellings in the kingdom, is on the estate of Thomas Read Kemp Esq. of Black Rock at the eastern extremity of Brighton. With a southern aspect, the building facade – presenting a square larger than Grosvenor-square, London, opening from the centre of a crescent 200 feet wider than the Royal Crescent at Bath – exceeds 3,000 in extent. The stone pavement is of greater breadth than that of Portland Place, in the Metropolis. In front is an esplanade, commanding an extensive, beautiful, and sheltered prospect of the ocean. Beneath is another esplanade similar to that of the Chain Pier, and stretching along the base of the cliff, which at this part is not less than sixty feet in height. To this lower esplanade, access is obtained by a gradual descent from the Marine Parade at the western end, and for the exclusive use of the inhabitants of Kemp Town, by a spacious tunnel cut through the rock from the centre of the Crescent Lawn. The Duke of Devonshire, the Marquis of Bristol, and many other noblemen and persons of distinction, have residences here.

The marine parade extends about a mile along the cliff from the Steyne to Kemp Town; there are many fine buildings here, and the numerous streets leading to St James's Street render it very desirable. Kemp Town is at the eastern extremity of Brighton, and is certainly a fine pile of buildings; the Crescent is 200 feet wider than the Royal crescent at Bath. Many of the nobility have residences here. among whom may be enumerated the "Marquis of Bristol", "the Duke of Devonshire", "Laurence Peel, Esq." In front of Kemp Town, under the cliff is an esplanade which is open to all respectable persons, from which leads a tunnel under the road to the centre of the lawn, belonging to the occupiers of houses in this place. The cliff is about 150 feet in height, and in clear weather the prospect is very extensive; the Isle of Wight may be occasionally seen, which is 40 miles distant; a few yards eastward of Kemp Town is the station of the coast guard preventative service, another is situated about two miles farther, on the road to Rottingdean.

The Brighton Municipal authorities some years ago decided that the district which had been known for nearly a century as Kemp Town should bear in future the name of King's Cliff, in recognotion of King Edward VII's interest in the district. Most of these spacious squares and terraces were built early in the last century by an enterprising townsman named Thomas Read Kemp, who had great confidence in the development of Brighton; hence the name by which the district has been known for so long and which still persists, in spite of the municipal fiat. It is singular, however, that Mr. Kemp resided at the opposite extremity of the town, where he built for himself a mansion known as the Temple.