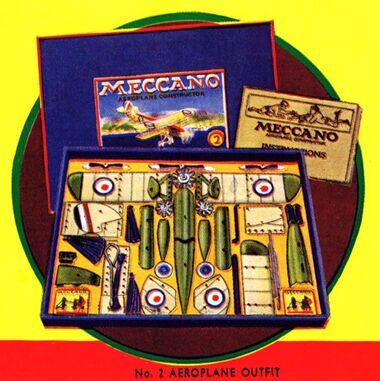 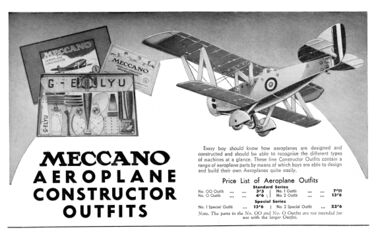 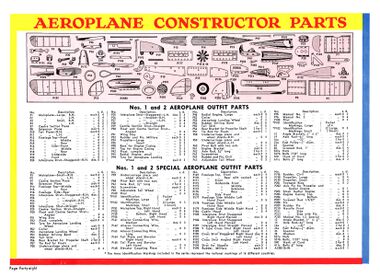 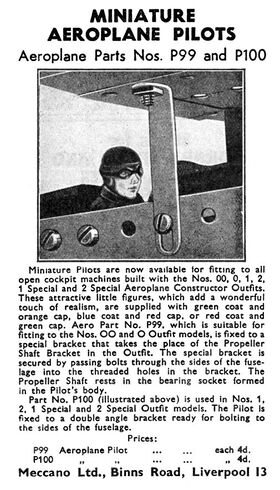 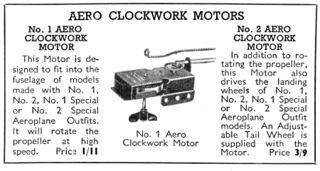 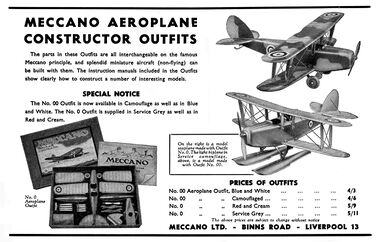 The Meccano Aeroplane Constructor outfits started to appear in 1931.

The kits had their own sets of specialised parts, and could produce a vast range of aeroplane types, partly because of the clever tactic of not committing to a particular scale. Aerodynamic limitations meant that basic fuselage and wing shapes weren't too different for large and small aircraft, so an airframe could have an open cockpit and a comparatively large pilot and become a single-seater plane, or it could have window-pieces fitted along its sides, and a jutting multi-window enclosed cockpit shell fitted forward, and with a few more changes could represent a very large airliner.

As with the main Meccano range, Aeroplane Constructor Kits came at different levels (00, 0, 1, 2 and No.2 Special), but the pieces from the smaller sets didn't work with those from the larger ones.

The sets included wings for monoplanes and biplanes, bodyshells, wheels, propellers, metal struts and cord for reinforcement lines, and in the larger sets there were also wheel covers, nine-piston engine block pieces, and seaplane floats, which were useful for standing models of very large airliners, where the standard wheels would be out of scale. For wheeled models, a contrate gear below the fuselage connecting to a special geared axle-piece between the front wheels allowed the plane's propeller to rotate when the model was pushed along the ground.

Meccano Ltd also produced two small specialised clockwork motors for the range. The No.2 Aero Motor could drive a plane's propeller and wheels, and came with additional useful items that included a small rear wheel for the fuselage.

The end of Meccano Aeroplane Constructor

As World War 2 loomed, the aeroplane constructor sets were modified to remove markings that might make the sets useful to The Enemy for training pilots and gunners.

The sets reached a natural closure during WW2, as the wartime investment in better and more efficient aircraft designs meant that aeroplane shapes were now increasingly tailored to the tasks that there were designed to carry out, and increasingly optimised for scale. Up until this point, aircraft designs had been fairly generic, since they'd often been designed for very limited production runs, and the wing is a large aircraft tended to look very much like that of a small plane.

However, with the new generation of planes that appeared during WW2, mass-production (and the need to outfly and outfight competing aircraft) made it very worthwhile for designers to fine-tune the shapes, and a Heinkel wing now looked quite different to a Spitfire wing or the wing of a Lancaster bomber. With the mass-production of these planes for the war, the public became used to recognising their distinctive outlines, and the idea of a generic constructor kit that could not make recognisable versions of these "celebrity" aircraft became less attractive.

When Meccano Ltd restarted toy production after the War, Aeroplane Constructor was not one of the lines that came back into production - the toy had had an honorable run, but aircraft design had now advanced too far and become too sophisticated for the concept to work any more.