A beautifully restored rare 2.5"-gauge model of Patrick Stirling's GNR 4-2-2 "Stirling Single" locomotive, made by Carette, dating from around 1900-1903.

This model was in a rather sorry state when it was rescued by Michael Edwards, who then organised and paid for its restoration to display condition. The model was originally steam-powered.

Michael Edwards, founder of the Sussex Vintage Model Railway Collectors' Club, donated the model to the Museum in May 2013, and it went on display in July 2013. 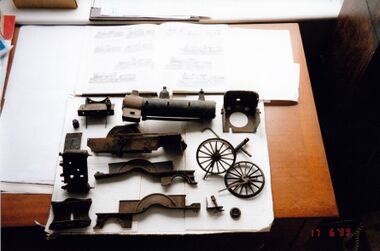 The model as a collection of pieces ME [image info] 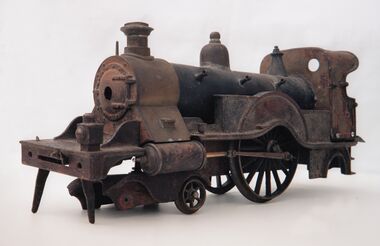 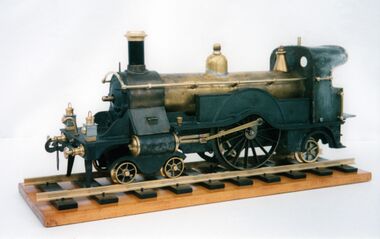 The model after restoration and refinishing, with replacement parts, awaiting repainting ME [image info]

In June 1995 I was given a box of components of a model engine which had lain in a garage for some years at Haywards Heath. Quick examination suggested they were unusual, and they were soon identified as a rare Stirling single made by Georges Carette in 2 ½” gauge around the turn of the century. Carette were one of the earliest toymakers from Nuremburg who ceased manufacture in 1914 when war broke out.

Most of the parts were there, except the tender, but a number of components were needed including the rear wheels. Having examined a restored version at the London Toy and Model Museum, in the company of Mr R Chester-Lamb an accomplished restorer, plans were drawn for the missing tender and photographs taken. I was able to have certain parts made by members of the Hornby Railway Collectors’ Association, and I was kindly lent a rear wheel mould, and provided a jar of the correct colour paint by Chris Littledale from the Toy Museum at Brighton.

By another stroke of luck I discovered both a brass casting firm and a small batch electroplater, Messrs Marshall Brass of Foulsham Norfolk and Small Batch from Barry South Wales. I also visited the York Railway Museum who have an original unrestored version and saw yet another example in private ownership in Brighton. I then had sufficient detailed information for Mr Chester-Lamb to commence work. One particular interesting aspect was the reproduction of the very interesting valve gear, which was a system of open moving parts and strip springs with ball bearings! This system was very inefficient but helps date the loco to pre 1900.

I then approached a number of painters and liners for quotes and Mr Chester-Lamb recommended Brian Badger from Birmingham, with whom he works closely. I agreed to this proposal, and after a few months, the model has now been completed. It has not been restored to working order.

This locomotive is built entirely of CASTINGS throughout, and is fitted with a strong Brass Boiler, with circulating Tubes; Double-Action Slide-Valve Cylinders, fitted with Link-Motion Reversing Gear worked by a lever in cab, 4in. turned Brass Driving Wheels, exhaust steam into funnel, Steam Dome, Safety Valve, Whistle in cab, turned Brass Hand Rails, Three Headlights, loose 4-wheel Bogie Carriage. The whole Locomotive, including the Boiler, is enamelled and finished in best style and in correct G. N. R. colours, and in every small detail has our careful attention. We can safely say that it is one of the finest Models of its kind on the market. This Locomotive is very powerful. Length over all, 24in. ; Height, 7 ¾ in. … … … … … 2 ½ in Gauge. Price, complete, £5 0s. 0d.

Steam gauge and Syphon, 7/6 extra. For special coaches for these Locos, see page 94.