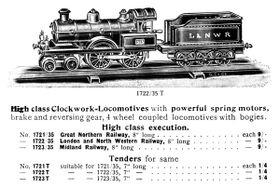 A brown gauge 0 lithographed model Midland Railway 4-4-0 locomotive and tender, number 1632, made by Georges Carette circa ~1906.

The model is pretty unusual for a Carette piece aimed at the British market in that the front of the loco carries Carette's maker's mark of "G.C. & Co." embossed into the gold-coloured metal, beneath the front guardrail.

Most of Carette's pieces aimed at the UK market were commissioned by and sold through Bassett-Lowke Ltd., and as the client, B-L would usually demand that the only manufacturer's branding that appeared on these pieces was theirs. 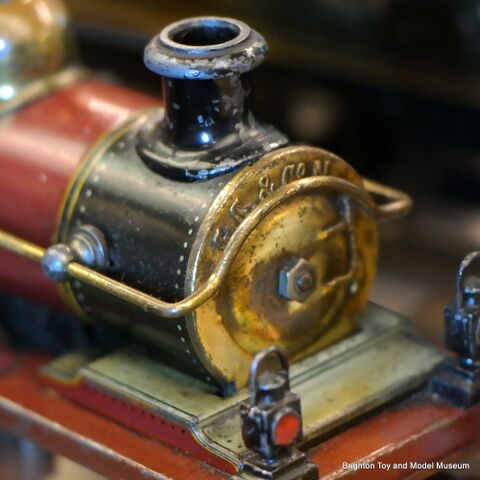 The model was one of Carette's most popular locomotives, and after Carette closed down during WW1, Karl Bub started making essentially the same loco model, but with "KBN" on the front (for "Karl Bub, Nuremberg")}}

The Midland Railway made sixty-five 1532-Class locomotives in three batches during the 1880s, and number 1632 was the first of the second batch.