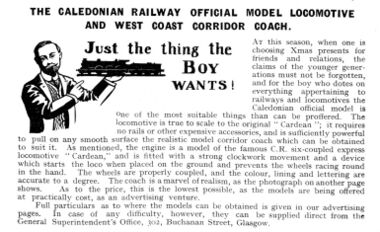 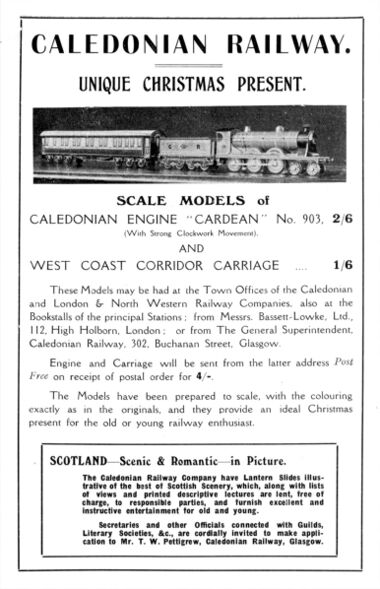 A blue gauge 0 clockwork 4-6-0 commemorative "Cardean" Caledonian Railway locomotive #903, with 12-wheel coach, made by Carette for Bassett-Lowke in 1912.

This was a West Coast joint stock LNWR/CR souvenir sold by Hamleys, and through a network of station newssellers.

Although this was a comparatively inexpensive and mass-produced item, the finish and design employed by Carette (for both the loco and the carriage) was quite excellent - it was a far more expensive-looking piece than it needed to be, making it a highly desirable item. Because the train was so appealing, surviving examples tend to be play-damaged - our example is in impeccable condition, making it a "reference" piece. 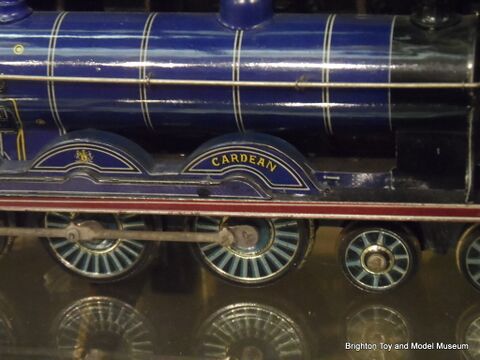 Plaque text: "A marvel of value"

Text from the tin printed advertisement, by Hamleys:

The Caledonian Railway's first six-drivewheel loco was McIntosh's 1903 4-6-0 "49-Class". Only a couple of these were made (number 49, and number 50 Sir James Thompson) and because the performance of these still wasn't particularly great on some of the steeper inclines, McIntosh tried again in 1906 with the 4-6-0 903 Class, which was a little better. Five of these were built (903-907), with 903 named "Cardean", presumably to mollify one of the railway directors who owned an estate with that name.

This may have worked, because the Railway embraced the "Cardean Class" and the locomotive achieved some fame through the public relations attention lavished upon it (including the production of the Carette/Bassett-Lowke promotional model), event though the Cardean's actual performance was still not especially great.

The last of the five "Cardeans", the unnamed number 907, was later destroyed in the terrible Quintinshill rail disaster of 1915 which involved five trains and killed an estimated 226 people. The crash happened when a troop train packed with soldiers being sent to fight in Gallipoli ran head-on into a local passenger train, after which an express train on an adjacent track ploughed into the wreckage, and the ensuing conflagration of wooden carriages with gas lighting then took in a goods train and a coal train that were parked alongside, flanking the crashsite. The fire was so intense that the exact number of deaths isn't known.