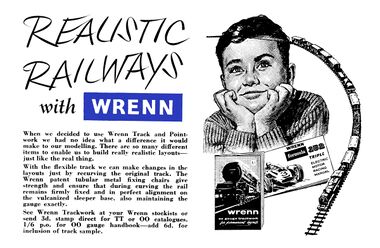 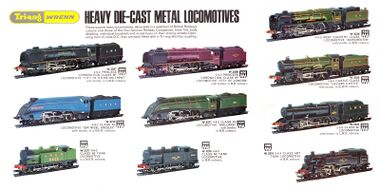 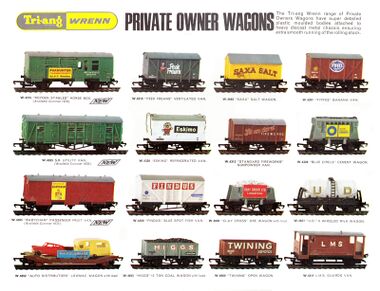 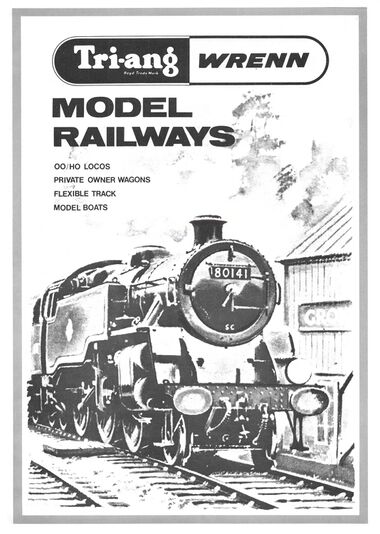 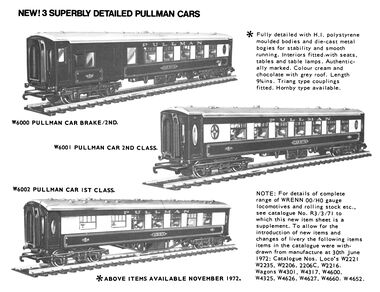 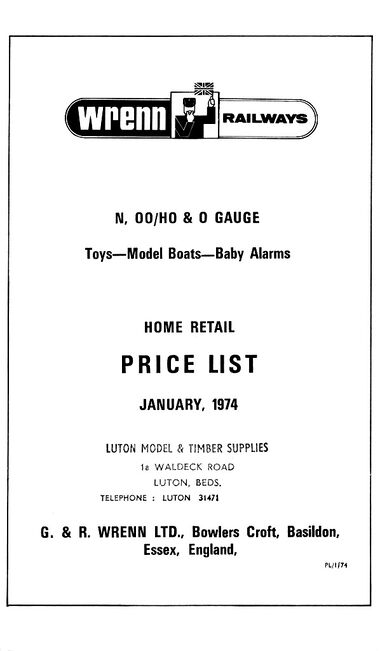 The company G&R Wrenn was started in 1950 by George Wrenn and Richard Wren ("G&R"), and became a limited company in 1957. Like Peco, Wrenn started out making model railway track and branched out into specialist and small-gauge model railway items that were aimed more at the dedicated model railway enthusiast market than the general toy-buying public. The company ceased trading in October 2015.

Wrenn had developed a smaller-sale 1:52 Scalextric-style tracked model car racing system in 1960 called Formula 152, which included a number of innovations including the ability to change lanes and run multiple cars. This design ethos seems to have resonated with Trix, who had done something similar with 00-gauge model railways to allow independent control of two trains on one track, and an arrangement was made in 1964 whereby British Trix Ltd. would sell the Wrenn "152" system and also invest in the Wrenn company.

The Trix arrangement didn't last very long ... 1964 was also the year that Lines Brothers' took over the failing Meccano Ltd., with 1969 marking the almost complete elimination of Meccano Ltd's Hornby Dublo range so that the Hornby name could be attached to Lines' Rovex-made plastic model railways (as Tri-ang Hornby). This left Lines Brothers with a certain amount of leftover "legacy" Dublo stock that couldn't continue to be sold without confusing customers.

This created an opportunity for Wrenn that went beyond the possibilities of their Trix agreement. Wrenn acquired the Dublo designs, machine tools and other equipment, and the existing unsold stocks of Hornby Dublo items, and also the right to manufacture their own 00-gauge model railway equipment using those designs and tools, as long as they didn't sell the results as "Hornby Dublo". At around the same time, Lines Brothers bought a two-thirds stake in Wrenn (with British Trix Ltd's investment being paid back), and Wrenn dropped their model racing car range to concentrate on their nice new Dublo-based business.

Box lid artwork: "Superb Wrenn Die-cast Locos with matching Hornby Dublo Rolling Stock" – this set appears to be a "transitional" set consisting of a loco made by Wrenn (using Dublo tooling), and leftover "Meccano-Ltd."-produced Dublo rolling stock. The bottom-left box text seems to be retrospectively stamped on the box as a temporary measure, presumably so that the box wouldn't need to be redesigned when the original legacy Dublo stock was exhausted and replaced with Wrenn-manufactured rolling-stock

From Lines Brothers' point of view, they got rid of their remaining Dublo stock to a smaller company that would be better able to sell it to the "legacy Dublo" market, they got shot of their Dublo tooling, with Wrenn now catering to the "disgruntled ex-Dublo owners" community they didn't have to worry about some competing outside company stepping in to exploit the situation, if Wrenn did well with the new Dublo-derived business then Lines owned two-thirds of it, and as a bonus, the "152" slotcar system that had been competing with their own Scalextric system had now disappeared.

As a comparatively small company catering to a specialised audience, Wrenn were able to run a business based on the Dublo inheritance, with their products appearing in Tri-ang's 1970, 1971 and 1972 catalogues, as Tri-ang Wrenn "heavy die-cast metal locomotives" and "Private Owner Wagons" alongside the Rovex-made products.

When Lines Brothers then went bust in 1972, Wren bought themselves out, reverted their name back to "G&R Wren" and continued making a range of nice Dublo-based model railway equipment under the brandname Wrenn Railways. They continued adding to the Dublo-based range, a notable addition being a motorised two-car "driver" set that, in conjunction with three Dublo/Wrenn Pullman carriages, could be used to make up a Brighton Belle train.

The age of steam was considered by many to be the golden age of railways in Britain. Boys of all ages have always been fascinated by locomotives thundering past, busily working local services or shunting in the goods yards. Unfortunately, the majority of them are no more, apart from those that were rescued and restored to their former glory. By producing these model locomotives, we feel that we are helping in keeping alive part of our glorious heritage.

Wrenn locomotives feature heavy die-cast bodies, which give improved traction and greater strength. They are all hand-built by craftsmen, using traditional methods, some identical to the original pre-war Hornby Dublo methods and using the same equipment. In other areas, improved technology has been used to improve the specification and final finish. They are suitable for both the collector and the modeller.

The locomotives are modelled to a scale of 4mm to the foot and are suitable for use on most proprietary 00/HO track systems of 16.5mm gauge. They will operate from a 12v d.c. supply, preferably using a transformer/rectifier controller and are suppressed to counter interference with radio and television under normal conditions of reception.

Today, a totally restored and enlarged former mill building marks Wrenn's new home, set on the banks of the beautiful River Dee in the internationally-acclaimed town of Llangollen, famous for its Eisteddfod festival, white water canoeing and preserved steam railway.

These were all brought from the company's previous temporary home - the Dapol Factory in Winsford Cheshire by Wrenn's current owner, David Boyle of Dapol Model Railways who took over the company in 1992.

At Winsford, much faithful effort went into Wrenn's engine and rolling stock development, as it still does. Pre-war equipment was identified, overhauled and set up in production line form; methods were researched and improved - where necessary made more cost effective - and the wagon assembly line enabled the final few part-assembled Wrenn wagons to be completed to the original specifications.

G & R Wrenn established a name as precision model manufacturers long before they took over manufacture of the ex-Hornby Dublo range, producing a wide range of quality trackwork for both 00 and TT. Innovative non-railway products were also developed and produced, including the Formula 152 slot racing car system and, a remote controlled boating system.

Once the production lines had been installed, the ex-Hornby Dublo range quickly gained a reputation as a high-quality product in perfect keeping with the original. From there Wrenn went on to add to the previous range by producing new locomotives such as the Royal Scot and the Unrebuilt Bullied Light Pacifics.

As the Triang brand selling "non-Hornby" model railway equipment, Wrenn also ended up taking over Lines Brothers' TT-scale models railways, as "Wrenn TT", and also got into the N-gauge market.

Since Wrenn only started in 1950, their products are mostly outside our usual "1955" cutoff date for display exhibits. However, we do have a couple of Wrenn-made "Brighton Belle" driver cars in the Brighton Belle display in our foyer, and we have the two Victory Industries model boats whose production was later taken over by Wrenn.