From The Brighton Toy and Model Index
(Redirected from Formula 152)
Jump to:navigation, search 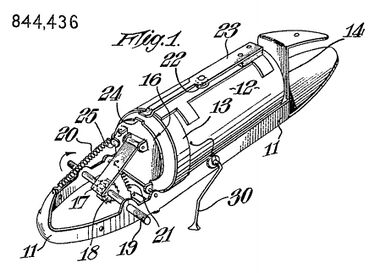 1960 patent: The solenoid (12) works on a hinged circular plate (16), collected to a hinged ratchet arm that that pulls on the teeth of a gear threaded onto the rear axle. A make-break connector (24) along with the springs and rear wheel loading causes the solenoid to constantly cycle between firing and relaxing [image info] 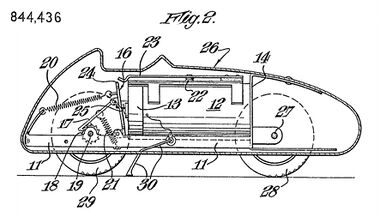 1960 patent: Side view of the motor fitted to a model racing car bodyshell [image info] 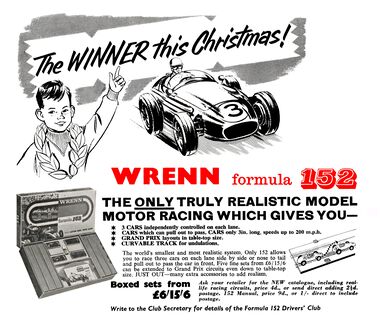 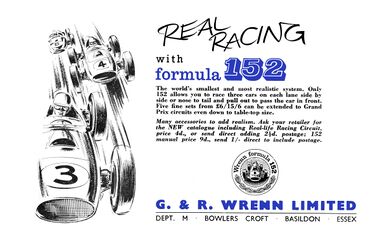 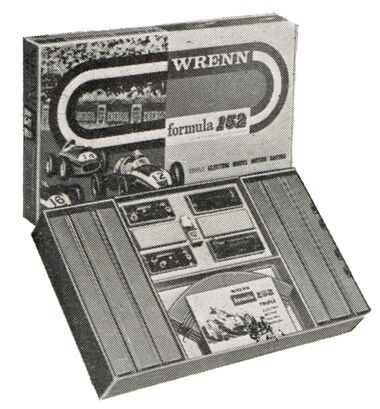 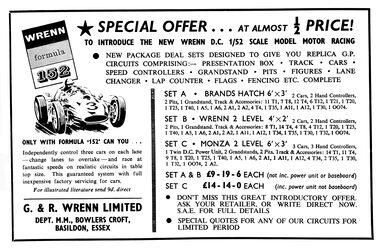 Where many of the competing systems were 1:30 or 1:32 and were almost "clones" of each other, Formula 152 was unusual in a number of respects: it used a significantly smaller scale, 1:52 (hence the name), and although the two-slot road sections looked standard, the slotted track had multiple power lines per slot, with the cars' small pickup brushes adjustable to be able to choose which "rail" to use. This allowed the use of multiple independent cars on the same track, nose-to-tail, which only made sense in conjunction with the special "deflector" lane-changing sections – these had red buttons when, when depressed, raised ramps within the slots so that a car passing the section was lifted out of its slot and deflected to the other lane. This added an extra level of competition – when activated, both drivers got to switch lanes every circuit, and there were "interesting" consequences of the cars being alongside each other when they passed the "special" section. The deflector section could also be remote-controlled (like model railway points) via a lever, which allowed further complexity if a third person operated the deflector control according to pre-agreed timings or rules: if one was "ahead", and could reach the deflector section when activated, one could get onto the other driver's track and block them. 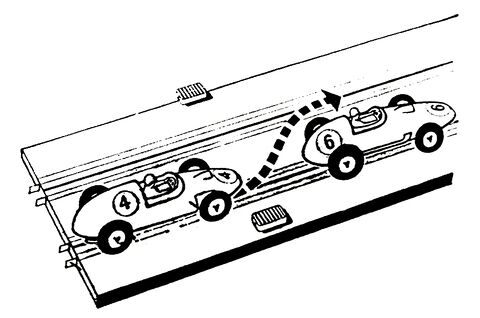 In order to create a sufficiently small motor, Wrenn rejected a conventional rotary motor on the basis that any rotary design with sufficient power would be too bulky, and instead produced a motor based on a single solenoid repeatedly pulling on a sprung hinged arm, connected to a ratchet-type mechanism. This pulled against a toothed wheel on the "inward" stroke to force the rear axle to rotate, and slipped over the teeth on the "outward" stroke.

The idea behind Formula '152' was born many years ago, when Wrenn designers and engineers discussed with model motor racing enthusiasts and real life car experts the possibility of providing a really true to life Electric Model Motor Racing system. The essential requirement decided upon was the need to save space allowing interesting racing circuits in table top size and also extensive Grand Prix layouts to be accommodated in the modern home. Also required, was the ability to be able to run several cars together on the same track both side by side and one behind the other, and finally the ability for these cars to pass either on the inside or outside by changing their lanes. These immense problems have been overcome and after several years of concentrated effort a special racing car less than 3" long, with a revolutionary new racing motor giving scale speeds of over 200 m.p.h. has been produced and all the necessary requirements of multi-running and overtaking, have been met.

Only with Wrenn Formula '152' can you have the world's smallest and most realistic motor racing system with all its patent features.

With Formula '152' you can have all the thrills and spills of real motor racing at home. Built in 1/52 scale the perfectly detailed cars only 3" long are capable of scale speeds of up to 200 m.p.h. The really compact size enables replicas of real life circuits of the world to be faithfully reproduced in a minimum of space. Only with the Formula '152' system can you race up to 3 cars independently on each lane and actually overtake the car in front by pulling out and passing as in real life racing. The track is flexible and can be curved for undulating roads. Controlled four wheel drifts and all the excitement of real motor racing is possible with full scope for your driving skill. These are the features that indeed make Formula '152' unique and the world's smallest and most realistic racing system.

Wrenn's system was launched at the Brighton Toy Fair in 1960, and was well-received, but in a market where almost every major toymaker seemed to be trying to promote their own competing slot-car system, some product lines were inevitably not going to survive. With the Lines Brothers takeover of Meccano Limited, and the resulting cessation of production of Hornby Dublo (which was passed to Wrenn, which then became a semi-detached part of the Lines Brothers empire, and sold Dublo products as Tri-ang Wrenn products), Wrenn's business model changed to shift more emphasis onto the model trains, and some conspiracy theorists have suggested that perhaps killing off Formula 152 (which competed with Scalextric, which Lines Brothers now owned) may have been part of the deal.

However, Wrenn was already having difficulty with finding ways to cut manufacturing costs to make Formula 152 more profitable, and may not have needed much persuasion to drop it in favour of a new Dublo-related business, with the Triang Wrenn products being marketed and distributed by Lines Brothers – this may have seemed a much safer and more lucrative enterprise.

Formula 152 model motor racing produced by G. & R. WRENN LTD., of Basildon, is scaled at 1/52, and the perfectly detailed 3-inch long cars used in this system are capable of scale speeds up to 200 m.p.h.

The WRENN system is also known as "Triple Electric Model Motor Racing" because it is designed to enable three cars to race independently under separate control on each lane and actually overtake the car in front by pulling out and passing as in full-size racing. This is a novel and exciting feature which makes the system one of the most realistic miniature racing types available.

Six boxed sets are obtainable in the WRENN range and circuits with six lanes can be constructed by adding extra track sections available separately. Several attractive scale buildings to provide realism to the miniature circuits are also offered by this firm, together with 1/52 scale figures comprising spectators, mechanics and officials, etc.

All WRENN FORMULA 152 products are unconditionally guaranteed against faulty workmanship and a full factory servicing is also available for the cars.

This is another of the sub-miniature systems that is ideally suited to the requirements of those who lack sufficient space for the installation of larger scaled layouts.