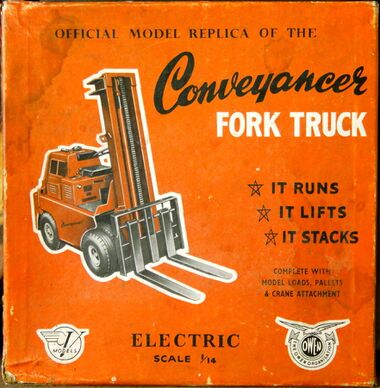 Victory Industries Ltd. of Guildford, started by William Warren and Gerald Burgoyne, were one of the few early British plastic toy companies whose models earned respect for their accuracy.

Their pieces were originally sold under the "Victory" name, but since "Victory" was already registered as a brandname, the company quickly decided to start selling their models as "V-Models", but with the manufacturing company name "Victory" also fairly prominently displayed, making it fairly obvious what the "V" was supposed to stand for.

The company also produced the Mighty Midget electric motors to power their models, which were sufficiently well-respected to be sold separately to hobbyists.

The company produced a "Miss England" metal boat in 1948 that ended up being marketed by J&L Randall, and followed it up with a "Mighty Midget" electric car, both of which were well-advertised by retailers.

In 1950 Victory were commissioned by Nuffield to produce and manufacture a large-scale model of the Morris Minor that could be sent to car dealers as a promotional display model, and the car's VW-Beetle-like curves suggested that it would be worthwhile investing in an injection moulding machine and producing the model with an upper plastic shell.

This project started a new path for Victory, and they went of to produce similar models of the Vauxhall Velox and the Austin A40 Somerset.

Although Victory clearly loved producing these models, these were not obviously toyshop mass-market pieces, and the focus on interesting projects rather than obviously popular ones continued in 1954 with their large detailed working model of ... a fork-lift truck. By this time, Victory had created a sort of marketing niche somewhere between the expensive one-off promotional models produced by companies such as Bassett-Lowke, and the small mass-produced diecast models produced by Dinky Toys - if you wanted a largeish mass-produced model of your latest product, Victory was probably the company to approach.

Where the "detailed plastic shell" approach did work well commercially was with model boats, where a large size was important for playability and stability (and for being able to see your boat properly when it was ten feet away on a boating lake), but low weight was essential for performance and for Not Sinking.

This was a "slot-car" system similar to Scalextric, and which appeared at about the same time.

Victory enters into a distribution arrangement with Trix, who made 00-gauge model railways and metal construction sets, and were looking to expand their portfolio of products to be able to compete with the mighty Meccano Ltd. and Lines Brothers (Tri-ang).

By the early 1960s, things were lookign rocky. Receivers were called in 1963 and the company restructured to focus on the more profitable products. There was then a factory fire in 1964.

By now, the company was strongly focused on the slot-car business, which had too many manufacturers trying to sell too many products to too few people. A decision was taken to close the company and sell off its assets in 1969, with Wrenn picking up the stock, tooling and rights to the two Vosper boats, which they sold through Tri-Ang, and then (after the collapse of Triang) distributed themselves.