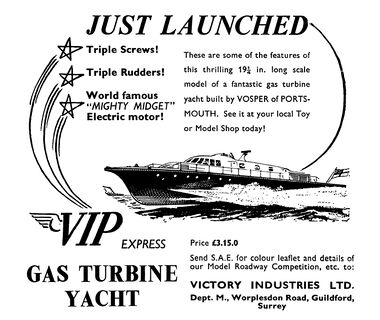 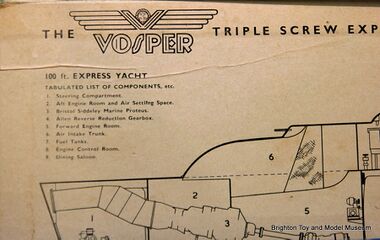 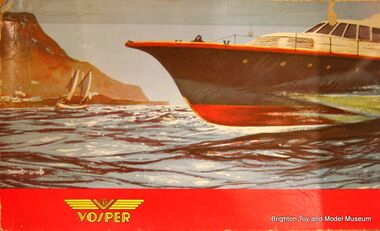 A battery-powered model of Vosper's triple-screw express turbine yacht, with the original box and packaging, including a cutaway diagram of the original yacht.

The model was made by Victory Industries Ltd, circa ~1961.

After Victory shut down in 1969, Wrenn bought the stocks and tooling for the two popular "Vosper" boats in the range and continued production, with Rovex Tri-ang as distributor.

The boat appears in the 1970 Rovex Tri-ang trade catalogue in the "Scalex Boats" section, listed as "Brand New for 1970", as W40: Luxury Motor Yacht, with the "W" presumably signifying that it was sourced from Wrenn.

After Tri-ang then went bust, the boat appeared in the January 1974 Wrenn pricelist as a new item for June 1974, as the "Onassis Yacht (Vosper Triple Screw)".