The end of Hornby Dublo 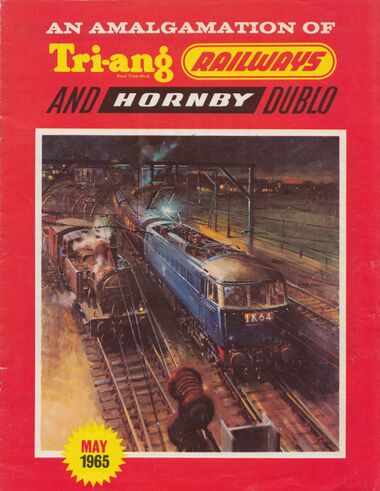 1965: An Amalgamation of Triang Railways with Hornby Dublo, May, eight pages [image info] 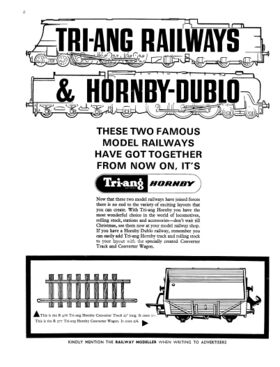 Although some Dublo enthusiasts blamed Tri-ang for "killing off" Dublo, it wasn't the new owners who ceased production – Meccano Ltd had already stopped physically making Dublo, having built up large overstocks in the warehouse. If anything, there's a mystery why the company had kept manufacturing more stocks of Dublo when it wasn't selling – one theory is that perhaps the people at the company loved the product, knew that Meccano Limited was likely to go bust, knew that once production of the expensive Dublo system halted it would probably never restart, and decided that they might as well produce enough stock of Dublo parts to make sure that enthusiasts had a chance of completing their systems once the company ceased trading.

In May 1965, Tri-ang published a red-covered eight-page information brochure that dropped a bombshell – Hornby Dublo was no longer a brand:

Following the incorporation of Meccano Limited, the manufacturers of Hornby Dublo trains, into the Lines Bros. Group (Tri-ang), a careful analysis was undertaken to study the advantages and disavantages of maintaining production of two entirely separate Model Railway Systems. The evidence showed clearly that there was excessive duplication of products in all fields and that since both systems operated on the 2-rail 12 volt D.C. standard, there were no fundamental obstacles to amalgamation.

The two railways will, therefore, be progressively brought together under the name TRI-ANG HORNBY and will use Tri-ang Super 4 Track and Tri-ang Couplings.

" Each of these ex-Hornby Dublo Locomotives is now supplied complete with a Tri-ang Hornby Convertor Wagon at no extra cost so that it can be used with Tri-ang Railways or Hornby Dublo Rolling Stock.

Hornby Dublo locomotives have long been noted for their sturdy construction and their 12Volt electric motors are built to last a lifetime.

The station buildings below may be used equally well with Tri-ang Railways and Hornby Dublo and the illustration overleaf shows what an exciting layout can now be created by the bringing together of these two marvellous model railways. " 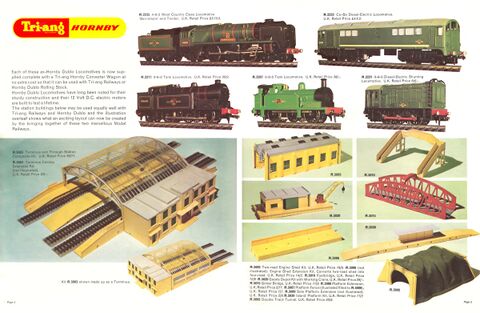 " Here is how Tri-ang Railways and Hornby Dublo, now Tri-ang Hornby, can be used together to build a Model Railway unequalled by any other in the World. The electrical aspect is the ultra simple Tri-ang Railways system and the use of Hornby Dublo Locomotives, Rolling Stock and Stations provides a variety of style and architecture never before seen.

The activities of the Hornby Railway Company in helping users to get the best value from their trains, will be superceded by the Model Railway Operators section of Tri-ang Club. The Club issues a Bulletin at regular intervals and details of the membership are published in the monthly Tri-ang Magazine. " 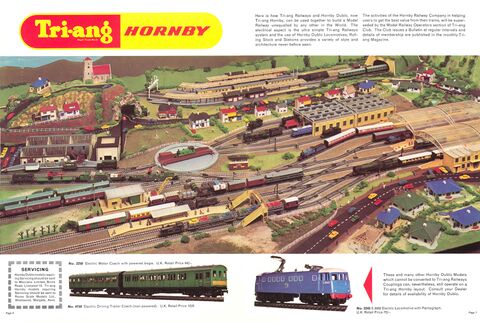 Pages 6-7: A large layout designed to show the possibilities of using Hornby Dublo and Triang Railways parts together

The "unification" of the two model railway systems required some way of interconnecting track using the two system standards, and also some way of connecting the two different sets of locomotives and rolling-stock. Tri-ang had the R.476 Convertor Track and the R.577 Convertor Wagon for this purpose, the idea being that the Dublo community would be able to buy and use Tri-ang model railway equipment with their setups, and gradually phase out or deprecate the non-Tri-ang parts.

" Tri-ang Railways Tension-Lock Couplings operate vertically while Hornby Dublo Couplings operate horizontally. It is not, therefore, possible for the two types to connect together directly. The Convertor Wagon is now introduced to enable users of either system to operate mixed Freight Trains.

This wagon is now supplied, automatically, with the five ex-Hornby Dublo Locomotives listed under the name Tri-ang Hornby (see overleaf).

A Passenger Convertor Vehicle will be introduced when Hornby Dublo Passenger Coaches cease to be available. " 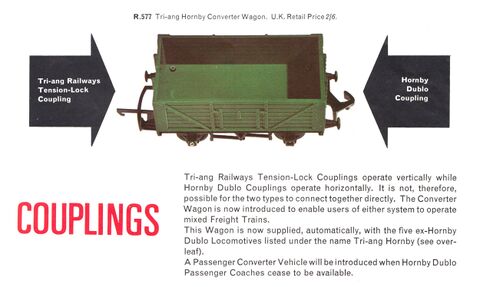 " Tri-ang Super 4 Track and Hornby Dublo 2-rail track are both gauge 00/H0 (16.5 mms.) Ther eis a difference in the rail sections and fishplates so that it is necessary to use special Convertor Tracks when using the two systems together. 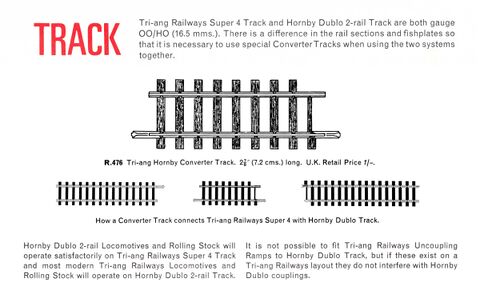 The Dublo items that were retained as part of the Tri-ang Hornby range (initially, at least), were given new Tri-ang parts numbers starting with "R." (which presumably stood for "Rovex").

As far as the Dublo locomotives were concerned, the renumbering was:

The 1965 brochure also gave prices for another couple of Dublo locomotives without "R" numbers:

1965 wasn't completely the end of the Dublo range ... in the end, Tri-ang did a deal with G and R Wrenn, whereaby Tri-ang bought an interest in Wrenn, Wrenn acquired the Dublo stocks and tools, and sold Dublo-by-another-name, through the Triang catalogues, as Triang Wrenn (with a "W." prefix to the catalogue numbers rather than R., signifying "Wrenn" rather than "Rovex"). After the collapse of Tri-ang, Wren survived as an independent company, and continued selling their Dublo-derived range, under the brandname Wrenn Railways.