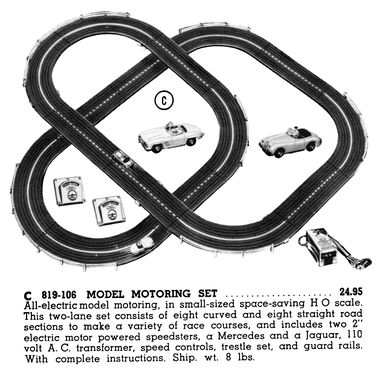 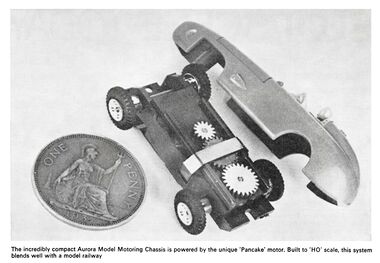 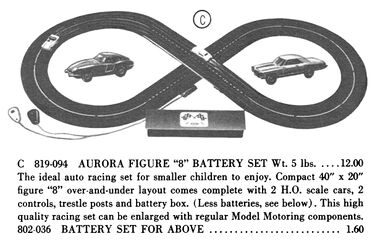 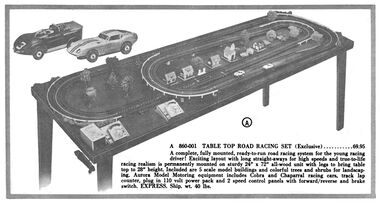 Aurora Model Motoring (circa 1960?) was the (eventual) name of Aurora's slotcar system scaled to work alongside 00/H0 model railways.

Aurora took over the system from Playcraft (which had produced its initial incarnation as Electric Highways Model Motoring), and continually enhanced the system, most notably when they replaced the "buzzy" solenoid-and-rachet drive system of the early cars with a miniature "proper" motor.

In order to fit a rotary motor into such a small space, Aurora produced a low-profile "pancake" design motor (the "Thunderjet"), with the rotor aligned vertically, and with the bulky pair of motor magnets placed forward and aft, in line with the car body. A sequence of plastic gears then transferred the drive power to the car's axle ... which was perhaps not a totally efficient system, but didn't matter so much considering the power of the motor.

In the 1970s, Aurora replaced Model Motoring with their next-generation version, Aurora AFX 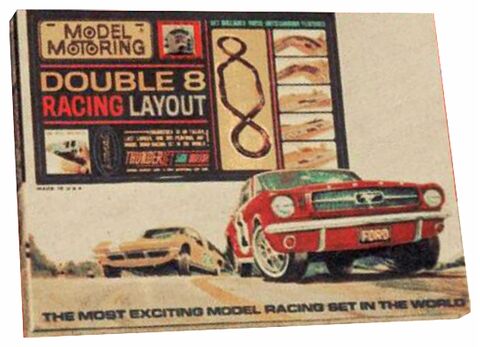 THE MOST EXCITING HOBBY SPORT TO COME ALONG SINCE ELECTRIC TRAINS!

Off they go like streaks of lightning, zooming down the straightaways, piling up at the turns. Each of these rear wheel-driven, miniature models of actual cars is powered by its own tiny, miracle motor. From where you stand, at the controls of your own speed-regulator (most sets come with 2 individual speed control units), they seem to be racing along real asphalt roads, heading dangerously for actual guard rails, climbing real grades, banking steep curves, scooting over lifelike trestles. Your buddy next to you sees that curve ahead and slows down. Here's your chance – you open 'er up all the way and pray she takes the turn. Wow! That "Jag" of yours can really hold the road. She comes out of the hairpin right side up and crosses the finish line an easy winner!

THIS IS TABLE-TOP RACING

to put Sebring to shame! You can assemble the road sections in minutes and you don't have to follow any set pattern. Make your raceway an oval if you want to, a figure-8, a circle or any other plan you have in mind. You can add sections as you go along, making your MODEL MOTORING layout as big and impressive as you wish. You can even double the width so that four can compete. Can't you just see a gang of these mighty mites jockeying for the lead at speeds up to 150 scale miles-per-hour?

BUILD IT RIGHT INTO YOUR HO RAILROAD LAYOUT!

If you reckon speedway racing is fun, just think of the kicks you'll get out of a hobby that goes on and on, for years and years, as you keep organizing new highway networks, whole cities and countrysides. No more dummy cars and fake roads! If you're a model railroader, you know what a great feeling it is to be your own transportation engineer, to schedule split-second arrivals and departures, loadings and unloadings. Well, now you can do it with cars and trucks, sports cars and station wagons that stop-and-go at your command! Right now, there's a choice of curved and straight road sections, assorted guard rails and trestle supports you can buy separately; in a little while (and forever after!) there'll be fleets of cars and trucks to pick from, and all kinds of roadside accessories – houses, farm buildings, diners, garages, hills and valleys, grass, rocks, and trees – the works!

Step on the gas and hustle over to your hobby dealer, toy, variety, department store. Check his supply of MODEL MOTORING sets and decide which model you want. There are 4 sets in all – from $10.95 to $24.95. The biggest outfit comes complete with its own transformer, but if you already own any kind of transformer or power pack, you're in business! MODEL MOTORING will operate efficiently off any type of power unit that will run electric trains! Don't be misled into thinking this is "just another racing toy." Only MODEL MOTORING by AURORA has the exclusive HO SCALE feature. Only MODEL MOTORING gives you both speedway racing and highway action. Keep this in mind for Christmas hint dropping: MODEL MOTORING is a present Dad will enjoy, too!

AURORA PRESENTS: THE FASTEST CARS IN THE WORLD

... the fastest, smoothest, most dependable cars this side of Sebring! You'll find them in the new Model Motoring sets with the picture of Stirling MOSS on the package. What makes them new? The fabulous Thunderjet 500 motors under the hood!

Engineered to out-race, out-last, and out -perform every other slot-car motor made, the Thunderjet 500 is a technological triumph. Model Motoring – for years the most popular racing set in America – has left the others in the dust! The only way you can get these lightning bugs to stop is by yanking the plug. Forget about breakdowns. Forget about pit stops. Forget about constant repairs. Spin the wheel of your remote control speed unit and let 'em go – forward ... reverse ... punch the brake button for that tricky turn coming up! There's a whole fleet of new models to choose from – XKE Jags ... new Fords ... Indy Specials ... Buick Rivieras ... hot rods ... Sting Rays!

GET THE CHRISTMAS GIFT OF THE YEAR! GET A MODEL MOTORING RACING SET featuring Stirling Moss Thunderjet 500 motors! Pick any of 5 complete sets – there's one to fit every gift budget. A wide range of roadside accessories are now available wherever Model Motoring is sold – grandstands, curved bleachers, start-and-finish pylons, a lap timer, a pit stop, a judge's stand – everything you need to design a Daytona or lay out a LeMans!

The holiday gidft rally is about to get under way. Drivers may rendezvous at their nearest hobby ship, toy, variety or department store. Gentlemen –start your engines!

Model Motoring in HO scale ... twice the action in half the space!

THE MOST EXCITING CHRISTMAS GIFT OF THE YEAR

Racing excitement unlimited ... and all you need is the top of a dining room table! One reason for the popularity of Model Motoring – (it's the world's biggest seller by far) – is the HO scale that lets you set up a professional racing circuit without taking over the whole house. Other reasons: Aurora's beautifully detailed cars ... their super-fast, ultradependable Thunderjet 500 motors ... those realistic Aurora accessories – electric lap counters, banked turns, traffic lights, grandstands and bleachers, start-and-finish pylons, repair shacks, judges' stands. Model Motoring is "The Set of Champions", the official set used in the annual Ford-Aurora Model Road Racing Championships. Christmas is a swell time to get started on this lifelong hobby, but make sure you're headed in the right direction – with Model Motoring by Aurora, the only set endorsed by the great English Race driver, Stirling Moss!

Six good reasons why Aurora's new "Double 8" is the most exciting racing set ever put in one package!

If you live in an average-size home or apartment, you want a set that gives you twice the action in half the space. So ... go HO – Aurora HO. Get one of the seven wonderful Model Motoring layouts at your dealer's now. Like this fabulous new "Double 8", they're loaded with great racing features. Remember that all Model Motoring sets come with Thunderjet cars – the speediest, most dependable, best looking HO cars on the circuit.

If you've got plenty of room, go with Aurora's new sets in 1/32nd scale; both the "World Championship" and "American Classic" Speedways are tops in their class. To mention just a few plusses: new pistol-grip throttles for better control, faster acceleration ... brightly coloured speed corners for fewer spin-outs ... board fences with bill-board signs ... and "Aurora American" cars powered by great A-jet motors!

Aurora model car racing sets and equipment are made entirely in the U.S.A. for distribution throughout America; in Canada for the Commonwealth nations; and in Holland for Eaurope and Africa.