From The Brighton Toy and Model Index
(Redirected from Playcraft)
Jump to:navigation, search 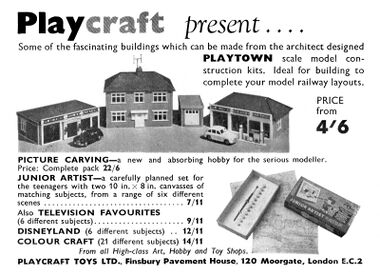 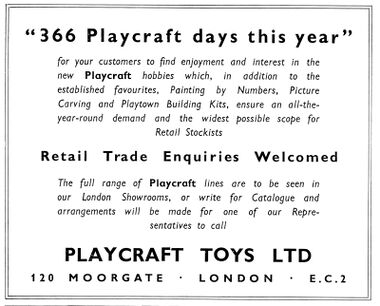 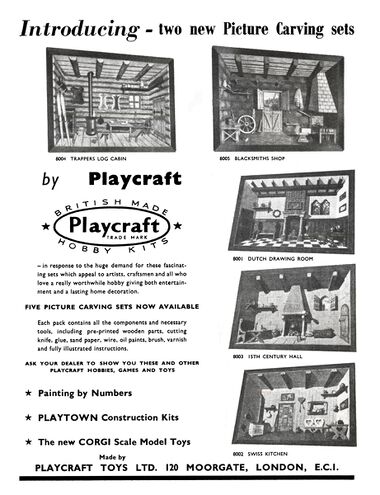 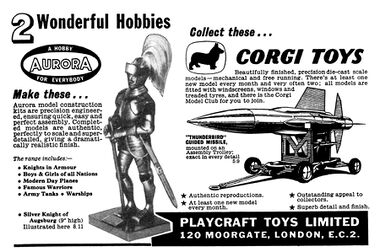 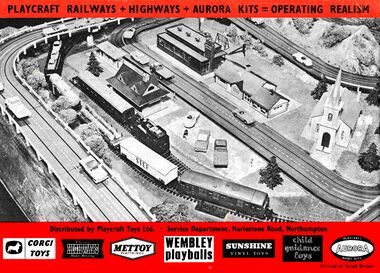 Playcraft was founded in 1949 by Arthur Katz, who had worked in the toy business in southern Germany, and had then left Germany for England and co-founded Mettoy to make metal toys.

While Mettoy had been based on Katz' core experience of classic German metal toymaking, Playcraft was a more experimental business distributing and selling other types of toy – almost anything that Mettoy didn't already produce – such as art supplies and moulded plastic.

The subject of branding and Playcraft gets quite confused, as Playcraft (or at least their distribution arm) acted as distributors for Mettoy, as well as for Playcraft and a number of other brands. So Corgi Toys (initially manufactured by Mettoy or Playcraft, depending on which promotional materials you read, and then by Mettoy-Playcraft) were distributed by Playcraft as a Playcraft brand, along with Mettoy Playthings ("Playcraft Mettoy"!). Aurora Plastic Kits, an independent US company distributed in the UK by Playcraft were branded in the UK with "Playcraft" added to the edge of the main Aurora logo.

With the success of Corgi Toys, the Corgi brand became so powerful that it eclipsed both Mettoy and Playcraft, and nobody really cared any more what the exact name of the company was that manufactured the toy cars – as far as buyers were concerned, Corgi Toys were made by Corgi.

Playcraft produced a range of paint-by-numbers sets (Junior Artist) and some "Picture Carving" sets that were briefly advertised on Hobbies Annual.

This was a range of kits broadly similar to those form Airfix or Revell).

Playcraft sold an 00-gauge (1:76-scale) slotcar system manufactured for them by Jouef ( Highways / Model Motoring ), which was then taken over by US-based Aurora and developed further, as Aurora Model Motoring (eventually evolving into the Aurora AFX system in the 1970s.

A couple of years after losing "Model Motoring", Playcraft replaced it in their range with a larger, roughly ~1:40-scale slotcar system (Champion).

The main historical significance of Playcraft is that Katz then merged the company with Mettoy, producing Mettoy-Playcraft, whose combined experience with metal and plastics then allowed them to create Corgi Toys, manufactured at a new factory in Wales. Playcraft's experience of working with plastics meant that Corgi's toy vehicles, with plastic interiors and clear plastic windows, had a critical advantage over Meccano Ltd.'s Dinky Toys range, and forced Meccano Ltd. to update their range.

For some years, Playcraft also retained a "satellite" presence in Northampton, where Katz had originally set up in business (with help from Bassett-Lowke Ltd), and where he'd started Mettoy:

The following 40 files are in this category, out of 40 total.