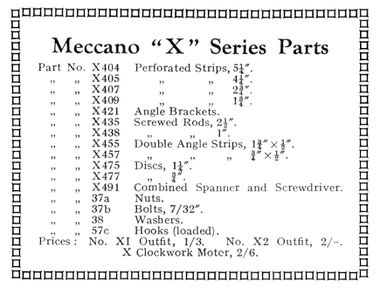 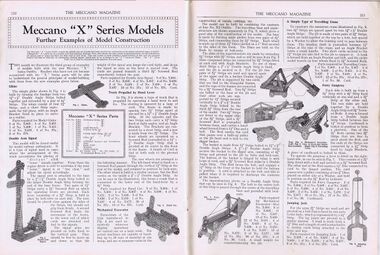 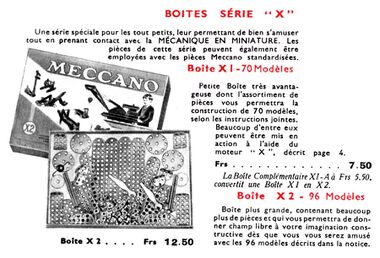 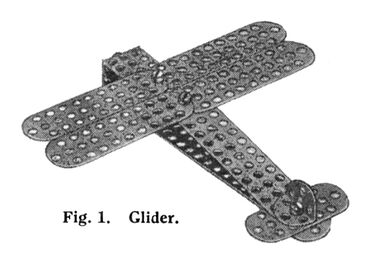 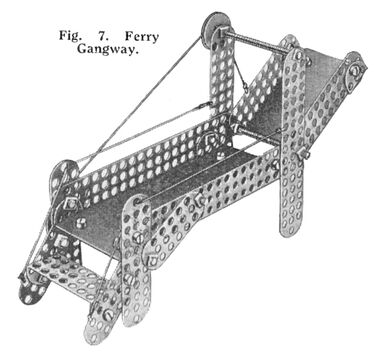 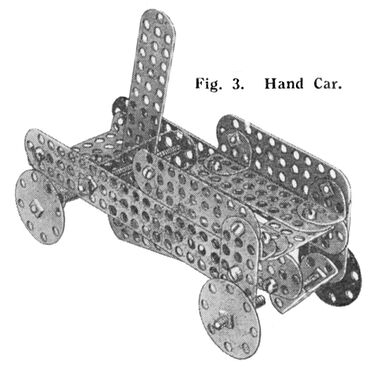 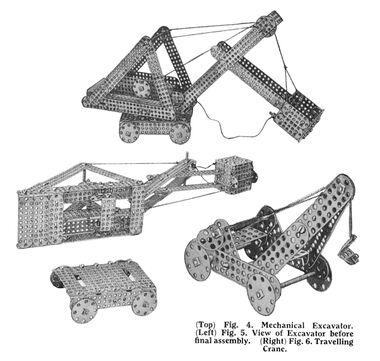 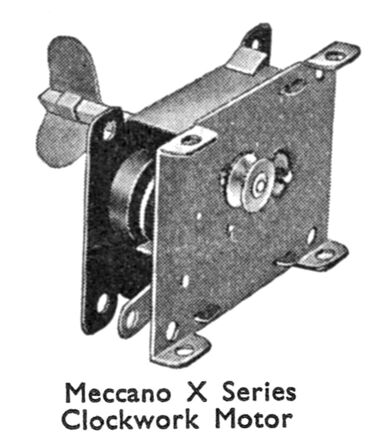 X Series was produced as a response to another company's products, the Tri-X or Trix construction sets (UK patented 1931), which were being sold more cheaply than Meccano.

Meccano Ltd. seem to have taken offence at a company making their own metal construction sets and selling them in Britain, and appear to have taken the decision to respond with a competing low-priced construction set that looked remarkably like Trix. One of the main differences between Trix and "proper" Meccano was that where Meccano strips had a single row of holes and its plates had rectangular arrays of holes, Trix strips were wider, with three staggered rows of holes, making an "X" shape (hence the name, Tri-X). The round-ended Trix strips were a sort of hybrid between plates and strips - they could be used as small plates, or as strips that could be bolted together rigidly at different angles without needing extra reinforcement. They also looked a bit like like sticking-plasters.

Although the pieces looked slightly odd, the fact that they were general-purpose meant that the manufacturer didn't have to include so many different types of part in their set, which in turn made it easier to assemble a smaller, cheaper construction set

Meccano Ltd.s answer to Trix borrowed both the "X" ("Series X") and the outline of the wider Trix strips, but in order to avoid being sued, had their three rows of holes were arranged side-by-side as a rectangular grid, rather than staggered to produce a diagonal grid.

The X Series system was anomalous in the way that Meccano Ltd. promoted it (or rather, didn't promote it). While the system did earn a series of articles in Meccano Magazine (signed off by Frank Hornby himself) and a model-making competition, it's difficult to find any actual advertising for the product even in Meccano Magazine, which perhaps supports the idea that Series X wasn't intended to be sold through Meccano dealerships, undercutting the standard Meccano product, but was meant to be sold as a budget product through outlets such as Woolworths, to starve the competing Trix product line of sales income. The first of the "MM" articles on Series X appeared in the December 1932 issue.

The "X" system was then discontinued in 1936 with Hornby's death, so its comparatively short run (1932-36) means that many Meccano enthusiasts will never have seen a set.

Another oddity concerning "X Series" was the appearance of lookalike sets under the British Model Builder brandname. These appeared to use the same parts, and even had manuals that seemed to be based on the same artwork. Was BMB a Meccano knockoff, or a system copying Trix that Meccano then bought out? One website says that BMB became System X, but BMB appears in some Australian retailer advertising from around 1934-36, meaning that it was sold (in some parts of the world) simultaneously with "X". In the Shire book on Meccano, the author suggests that British Model Builder was a "stealth brand" that allowed Meccano Ltd. to clear their stocks of the unsuccessful System X without being seen to be discounting a Meccano product. Another explanation might be that perhaps the idea was always to sell the product cheaply under a non-Meccano name as a "spoiler" for Trix sales, and that perhaps also selling the system under the Meccano name as an "official" Meccano product was an afterthought.

The use of the name "British Model Builder" for the "non-Meccano-branded version of X-series may be a wry reference to the brand "American Model Builder", which had been used for a Meccano "clone" in the US until Frank Hornby had managed to get it taken off the market ... but only after extensive, time-consuming and expensive litigation by F.H. Hornby's extansive transatlantic trips to get AMB withdrawn would probably have left him with the name seared into his memory ... calling his own "stealth" product British Model Builder might have been his way of saying "If anyone's going to rip off Meccano, it's going to be me!" (and possibly also reminding the Trix management of his determination not to allow what he considered unfair competition to succeed).

While the "proper" System X parts were painted red and green, and (usually) bore Meccano stamping-marks, the BNB variants were bare metal without identification stamps.

X Series (like Trix) used more densely-packed holes than standard Meccano, with holes spaced at intervals of a quarter-inch rather than a half-inch. Since the holes were the same size as standard Meccano holes, X Series parts could be used with parts from standard Meccano sets.

Apart from the obvious feature introduced by Trix of having wide pieces with three rows of holes that could be used either as strips or plates, one of the major distinctions between "X" and conventional Meccano was the approach to wheels and axles.

Where conventional Meccano used smooth axles and wheel parts that had their own screw collars for fixing, "X" avoided dedicated wheels and axles, and instead used threaded rods that could be used either as axles or as long headless screws. Simple flat pierced discs could then be used as wheels by bolting a threaded rod section to a frame to use as an axle section, threading the disc onto the rod, and securing it with one or two additional nuts. This meant the the threaded rods and discs were multi-purpose – the rods could be used as axles or as adjustable spacers, and the discs could be used as wheels or as flat round plates.

Similarly, "X" didn't include pulleys – if one needed a pulley, one could fix two discs together, spaced by a central nut, or sandwich two large discs together around one or more smaller-radius discs. This meant that "X" could claim to be a self-contained system ... but of course, any owners who wanted to supplement their "X" set with more standard Meccano parts were quite welcome to do so.

Meccano's X Series sets didn't last very long, but if the intention was to divert sales away from Trix, then perhaps they achieved their purpose. Nowadays almost forgotten, the main legacy of X Series is the cheap and lightweight X Series Clockwork Motor , which stayed on (with a few minor changes) as the Meccano Magic Motor.

The idea of using double-density holes made a reappearance in the 2013 Meccano Evolution sets.

The Meccano "X" Series outfits contain an entirely new set of parts that make possible the construction of an almost unlimited range of models. Although the "X" parts are on a smaller scale than standard Meccano Parts, they embody the same system of equidistant holes, but the perforations are spaced only 1/4" apart and there are three rows to each Strip. This new system of parts simplified model-building so that even our youngest readers will have no difficulty in constructing working models, which may be set in motion by an "X" Clockwork Motor. The "X" Series Parts can be used in conjunction with standard Meccano parts.