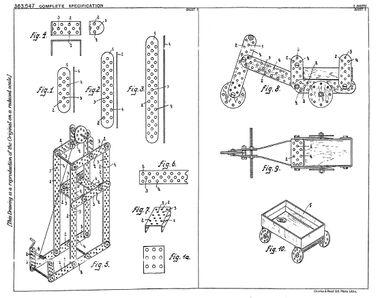 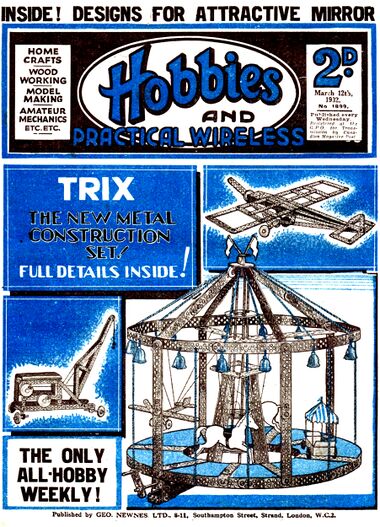 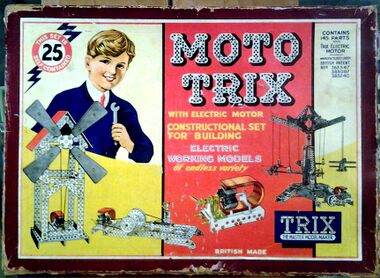 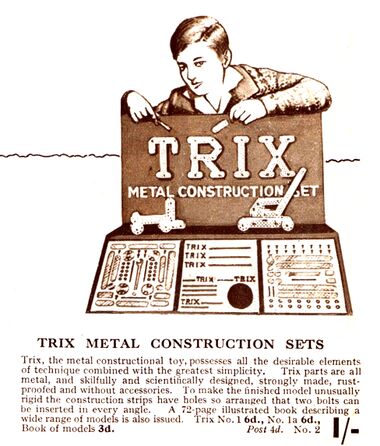 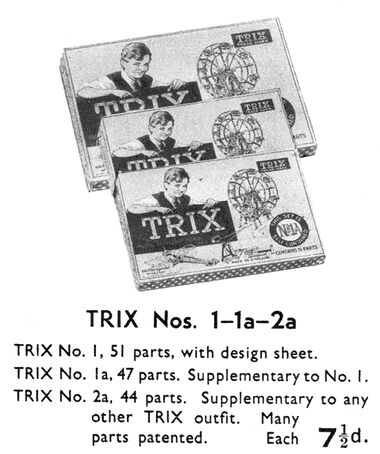 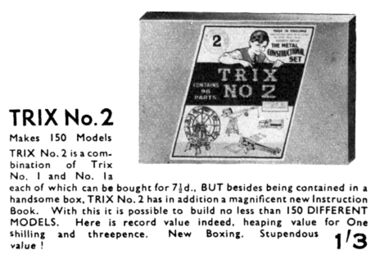 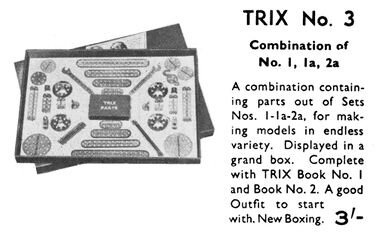 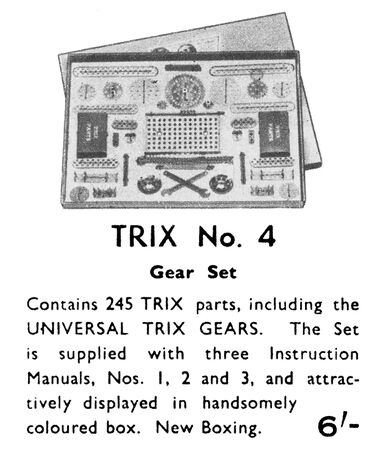 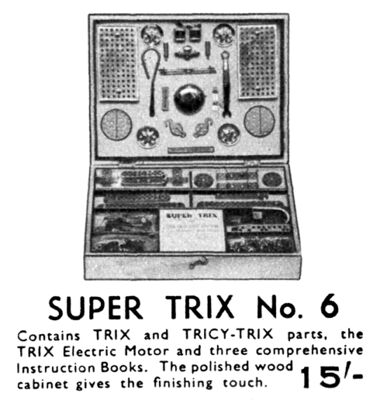 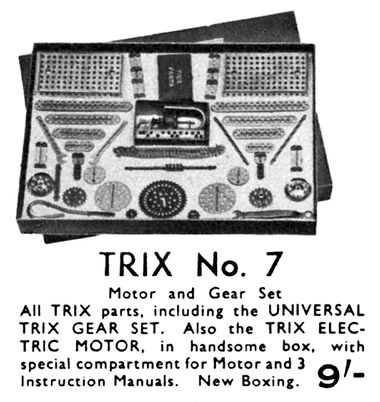 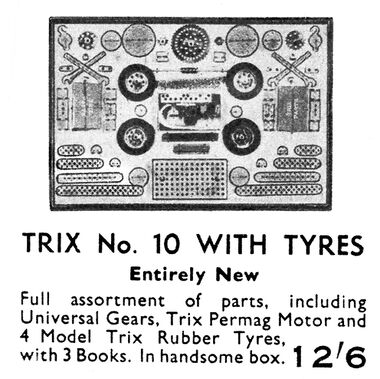 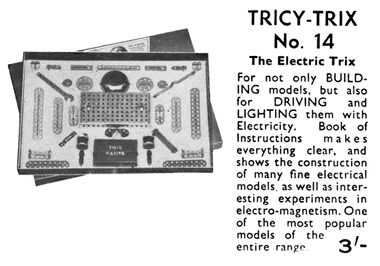 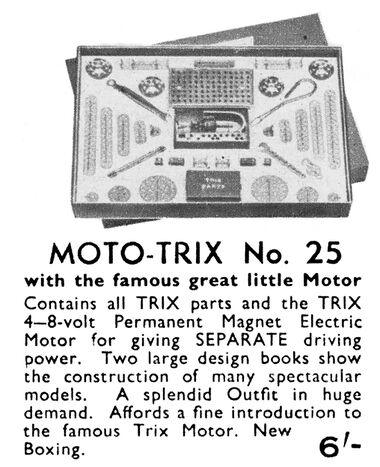 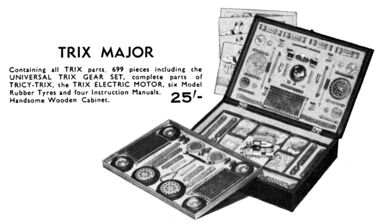 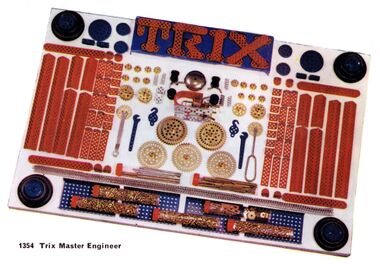 Like the market leader Meccano, Trix sets came in a series of numbered boxes, with larger numbers signifying a larger set, and the smaller sets could be upgraded (like Meccano). However, this sequential upgrade a only applied to the first few sets, as larger-numbered sets were more random in their contents, with different combinations of features including gear packs and the Trix Electric Motor, and/or other electrical items. As well as Moto-Trix (including a motor) and Tricy Trix (with electrical parts), the range also included Trix Extra Pak packs of parts and the Scientrix science set. 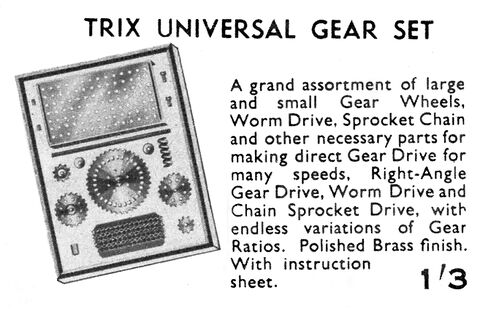 The essential idea of the patent (which made it sufficiently dissimilar to Meccano), was extreme minimalism in the number of parts required. Where Meccano had a lot of individually-minimalistic plates, strips and rods, Meccano sets became quite complex, and because each part had a limited number of uses, a set had to be quite large (and therefore quite expensive) if it was to be able to produce a large number of different models. For many models, many of these specialist parts in a set wouldn't be any use. This wasn't a problem for Meccano Ltd., as they were very happy to sell the extra parts and expansion sets that their users would almost invariably find themselves needing.

The Tri-X or Trix construction kits took a different approach. Strips were wider, and had three sets of staggered holes, and could be used either as supports or as small plates. This meant that although Trix parts were more complex, the wider range of uses for each part meant that the sets could be simpler, with a much smaller number of separate parts. The multifunctional nature of the parts also meant that fewer of the set's parts were "wasted" when building a model, which in turn meant that the system could get away with having sets that included fewer pieces.

The big advantage of having a construction set system that needed fewer pieces to provide a given level of functionality was that the sets were correspondingly cheaper to produce, and Trix sets sold on the basis that they were cheaper than Meccano sets.

The Trix patent also made a point that the system was intended to encourage users to incorporate everyday objects such as matchboxes and cotton-reels in their models - for instance, a large matchbox could be slotted into a Trix frame to act as the base of a model wagon. The wider plates and larger number of potential mounting holes (compared to Meccano) made it easier to include "foreign" objects in Trix models, and meant that Trix had less of an obligation to provide additional specialist parts.

THE special supplement on pages 591 to 594 of this issue introduces to you something entirely new in metal construction sets.

Unlike many other construction sets, which cost a pound or more, Trix costs 6d. a box, and there are no expensive accessories. You may purchase two dozen nuts and two dozen bolts for 3d., and by means of Set No. 1 and set No. 1a (each costs 6d.), it is possible for you to make a vast number of models which, with other sets, would cost twenty times that amount. I shall award prizes for details of new models sent in by readers each week, and each week also Trix information and details of Trix models will be featured. Trix incorporates principles and methods of construction absolutely new, and within a short time it will be one of the most popular construction sets on the market. Follow Trix week by week in Hobbies.

We have great pleasure in introducing to our readers this week an entirely new metal construction set of outstanding merit which incorporates many novel improvements in construction sets. It is marketed under the name of " Trix, " and we shall each week in this journal describe new Trix applications. That is to say, we shall describe some of them, for the variety of its applications, the uses to which it may be put, the number of models which may be made with it are illimitable.

It is necessary at the outset briefly to explain some of the advantages of Trix. In the first place it costs only 6d. a box, and all the models are made with one or more of those 6d. boxes. Trix No. 1 contains fifty-one pieces, which you will find detailed on page 592, and Trix No. 1a contains forty-seven parts as illustrated on page 593. There are thus no expensive accessories to buy as is the case with almost every other constructional set. The only spare parts you can buy are nuts and bolts, and these are retailed at the very low price of 3d. for two dozen nuts and two dozen bolts.

It will be noticed that the spanner is pierced, and that he spacing of these holes coincides with the spacing of the strips themselves, so that spanners may be used (as will be seen in the illustration on page 594) as connecting links, coupling bars, wheel spokes, etc. The set of parts has been designed to facilitate rapid construction of practically everything it is desired to make; and as a matter of fact it is possible to reproduce in miniature practically anything with Trix parts.

It will be noticed that the centre row of holes have their centres staggered in relation to the outer rows of holes, thus permitting one piece to be bolted to another piece quite rigidly at any desired angle, and also providing a greater degree of rigidity in the completed structure, since it is possible to use two bolts quite close together. This detail alone eliminates the need for jointing brackets, tee-pieces, etc.

Trix is British Made.

Notwithstanding the fact that Trix costs only 6d. a box, it is British made at the well-known model making factory at Northampton. It certainly is a remarkable achievement that a system of construction which has eliminated the need for expensive accessories, and which enables the owner to erect elaborate models surpassing in simplicity and ingenuity models which would cost many pounds if constructed in any other way, can be marketed at such a low price. ...

Meccano Ltd. responded to the potential commercial threat posed by Trix by producing their own suspiciously-similar budget competitor, the Meccano "X-Series", which had the same wider strips with three rows of holes as Trix, and an "X" in the name, but with the three rows forming a rectangular grid rather than being staggered.

The X Series didn't last long, but probably served a purpose in diverting sales away from Trix. However, "X" didn't manage to kill the product - Trix sets were still selling in the 1960s, long after the Series X experiment had disappeared.