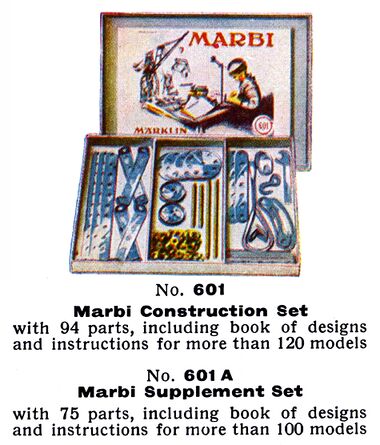 Märklin's MARBI Construction Sets appeared in around 1933 as a way of producing cheap, aluminium, entry-level sets to address the lower end of the market while trying not to undermine their own more "premium" sales for the steel Märklin Metallbaukasten range. The logic being that if they didn't sell sets at the budget end of the market, someone else would (such as Trix), and that with enough sales that company might then be emboldened to produce more up-market products to compete with the "proper" Märklin range.

A similar approach was taken by Meccano Ltd. with their "X Series" budget range, deliberately designed to fill the corresponding "low-budget" niche in the UK, again assumed to be a reaction to the appearance of the Trix sets. 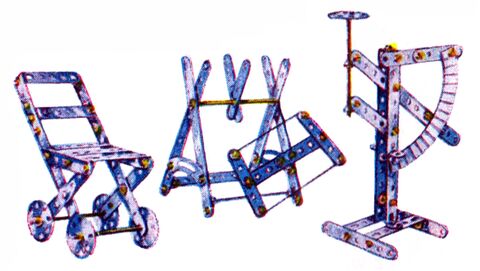 1936: Examples of models made with MARBI

The MARBI sets used cheap unpainted aluminium versions of the proper coloured enamelled-steel Metalbaukasten parts, and in 1936-39 there was just a single main set, 601, an addon set, 601 A, and a budget aluminium clockwork motor 650. If customers had enjoyed playing with MARBI, but now wanted a wider range of parts, their option was to start purchasing the full-blown Märklin Metallbaukasten sets.

The MARBI Clockwork Motor, Märklin No. 650