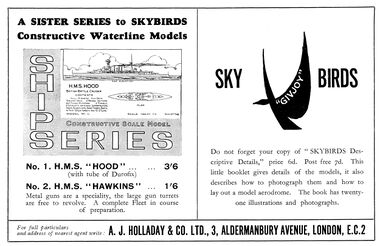 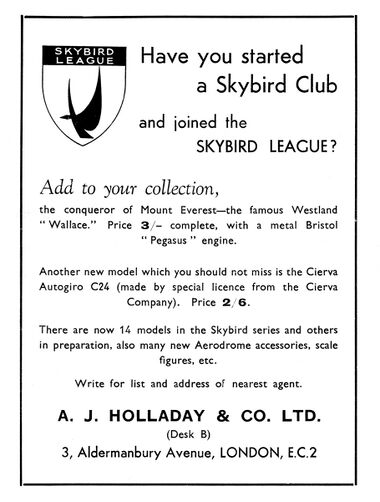 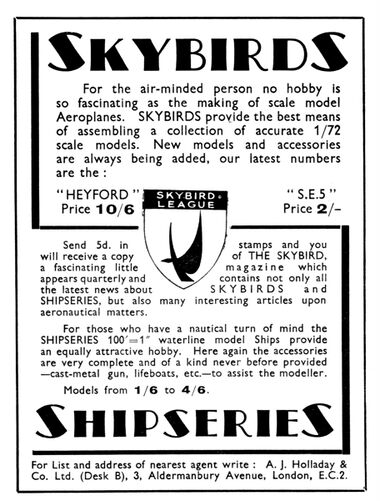 Skybirds was an early (1930s) range of 1:70/1:72 scale model aircraft kits and accessories (also available pre-built) made by A.J. Holladay & Co. Ltd. of London, run by Alfred J. Holladay. Much or all of the range was designed by A.J. Stevens.

The range, made from wood, was produced from 1932 until the 1940s (when their property was destroyed in the Blitz), and predated the more modern plastic 1:72 model aircraft ranges later made by Airfix and Revell. 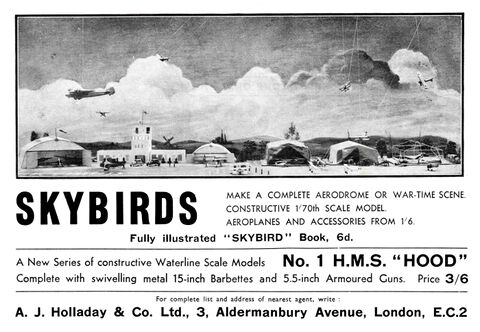 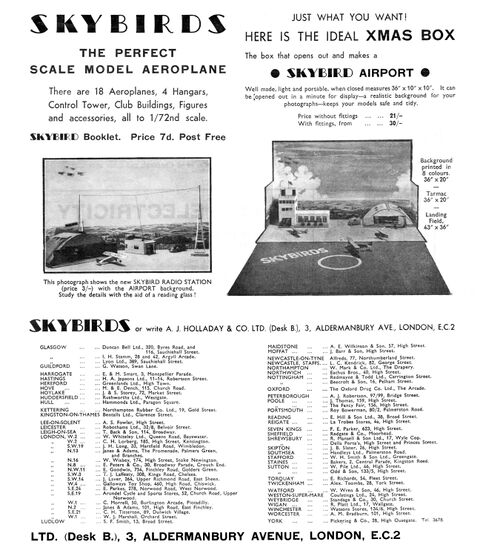 1933: Skybirds, and "Skybird Airport". "Well made, portable, when closed measures 36" × 10" × 10". It can be opened out in a minute for display – a realistic background for your photographs – keeps your models safe and tidy."

As mentioned in our issue last month, A. J. Holladay and Co. Ltd. have issued a new Skybird " list. We have now received a copy of this. It has been fully revised and brought up-to-date, while several new models have been added to the range. These make aeroplane construction simple, but for those people who do not wish to make up their own models they can be obtained ready assembled and painted. They range in prices to suit all pockets from "Hawker Fury," Sopwith "Camel" and "S.P.A.D." (French), etc., at 2s., to the Fairy "Hendon" and Night Bomber at 12s. 6d. These are for constructional sets, and the models already constructed retail from 6s. to 27s. 6d. There is also a complete and simple set for juniors termed the "Aeronca" which retails at 1s. 6d. There is a full range of accessories, etc., including engines, cowlings, airscrews, transfers, working materials, paints, etc., military equipment, aerodromes and aerodrome accessories, as well as a complete series of anti-aircraft models. The latter includes complete A.A. Gun Unit at 4s. 6d., anti-aircraft at 1s. 6d., complete A.A. Searchlight Unit, Sound Locator Unit, A.R.P. Air Raid Shelter, etc. In the mechanized units there are armoured cars, whippet tanks, ambulances and Army lorries.

There is also a large range of "Skybird" strong, solid cast figures and "Skybird" flying models. Full details and lists can be obtained from A.J. Holladay and Co. Ltd., 3 Aldermanbury Avenue, London, E.C.2.