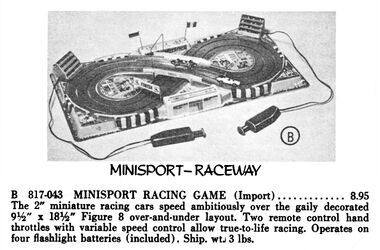 A small number of "spring-driven" slotcar systems appeared in the 1950s/1960s, in which the slots contained a circuit of spring pulled around by an electric motor, and the cars had pegs attached to their bases that then engaged with the circulating spring.

In the UK, we had the Matchbox Motorway system, apparently licensed from the Biller patent. At some point there was also a Chad Valley version of the larger Biller/Matchbox set M3, with a central roundabout.

In the US, Kenner Toys also produced Minisport, a very cheap two-lane fixed figure-of-eight-track with bridge permanently embedded in a rectangular base, aimed at smaller children and described as a "game".