From The Brighton Toy and Model Index
Jump to:navigation, search
== this section may refer to an older museum exhibition that is no longer on display ==
These exhibits were rotated from the museum display space in September 2015 to allow for structural maintenance. They will be replaced by a new display of Dollhouse Furniture for the museum's 2016 anniversary celebrations 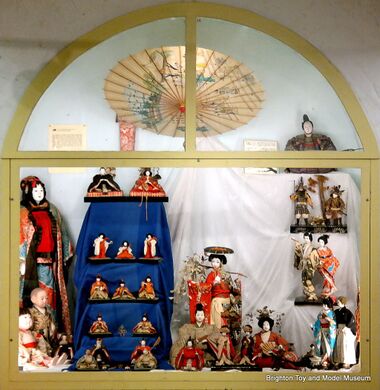 The Japanese Dolls display, after the 2013 refit and reorganisation [image info] 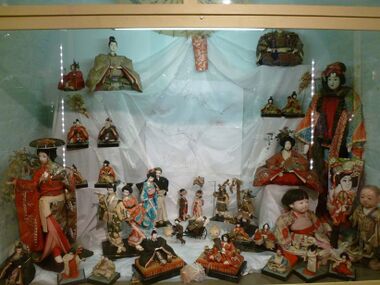 A wall display cabinet of Japanese traditional dolls, near Puppet Corner, in Arch Two is an interesting contrast to the more Western toys in the Museum.

Called Ningyō, meaning "of human shape", Japanese dolls have been crafted and used in Japanese culture for thousands of years. The first dolls can be dated back to almost 8000 BC/BCE, however, the height of doll-making is known to have occurred between 1603 and 1867 during the Edo Period when Japanese trade relations were minimal due to a reduction in trade relations, meaning that domestically-produced luxury goods were rigorously perfected. The height of doll production was such that laws and regulations were enforced to ensure that no one among the multitude of doll-makers was unfairly advantaged over anyone else – regulations were placed on materials, height and weight of the dolls. Anyone who exceeded this limitations could be fined, imprisoned or even exiled from the region.

Dolls have been profoundly bound-up in Japanese life, their uses ranging from simply toys and good luck charms to children, to powerful protective charms, ceremonial and religious icons, or representations of life events or the imperial court, and even as wedding gifts and honored diplomatic gifts for political purposes. Bound up in the Japanese pagan religion, Shinto, dolls were believed to hold great spiritual power, due to their close likeness of the human form. Famously, dolls have been used for Hinamatsuri, (Girls’ Day, March 3rd) and Kodomo no Hi, (Children’s Day, May 5th, derived from Tango no Sekku, Boy’s Day).

Our collection here at the museum consists of dolls dated between the late 1800s, all the way through to the 1970s.

The oldest dolls include one of our Ichimatsu dolls, and some of our dolls which resemble the Emperor and Empress of the imperial court (classified under Hina Dolls).

Our later dolls include the Nishi Geisha Dolls, probably produced between the 1950s and 1970s with distinct American influence from this period.

However, the main feature of our collection is undoubtedly the Complete Hina Doll collection around the cabinet. Hina Dolls were displayed during Girl's Day and were displayed on a tiered platform to resemble the hierarchy of the imperial household. Most Hina Dolls displays have three tiers displaying the Emperor and Empress, Court Ladies and Musicians. However, ours at the museum displays those mentioned, but goes on to include Court Ministers, and the often-forgotten Shicho Servants.