The first and largest Nishi Geisha can be seen in the foreground of the cabinet on the left, wearing a red kimono and traditional broad-brimmed kasa had while holding an umbrella. 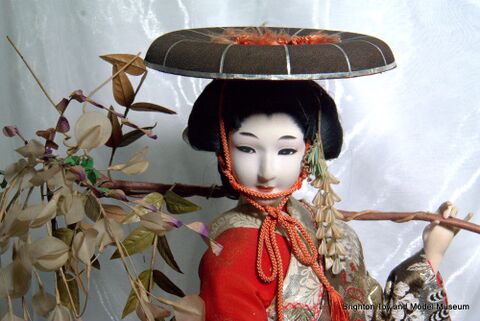 The second stand, behind the first Nishi doll, holds a pair of dancing Nishi dolls, a man and a woman. The man wears a cream and green obi, while the geisha beside him wears a red kimono with blue patterns. 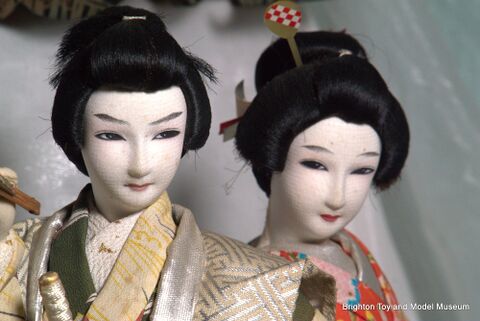 The final pair of Nishi dolls can be seen at the back of the cabinet, the geisha wears a bright blue kimono, and stands beside a blonde-haired man in a black and cream obi. 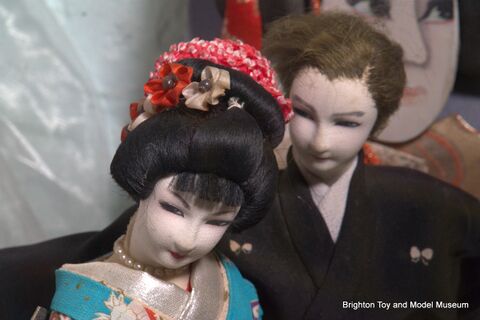 The American influence in these dolls is very clear - the wide eyes, small lips and large foreheads are reminiscent of the classic 'Barbie doll' look, and the fact that a male and female doll are stood together on the same stand (with one of the male dolls being blonde as well!) is a clear imitation of 'Barbie & Ken'.

These dolls were, no doubt, manufactured for display purposes. The quality of their silk clothing, the stands on which they are poised, indicates that they were not produced as children's toys.

== this section may refer to an older museum exhibition that is no longer on display ==
Retrieved from ‘https://www.brightontoymuseum.co.uk/w/index.php?title=Nishi_Geisha_Dolls_(Japanese_Dolls)&oldid=29993’
Categories: