Two Ichimatsu dolls, the size of small babies, can be seen on the far right of the cabinet. Named after the double-joined entertainer, Ichimatsu, these dolls are known for their movable limbs.

The first and oldest doll, seen with a baby-like bald head wearing a gold and green kimono, can be dated to approximately the late 1880s or 1890s, when male Ichimatsu dolls were particularly popular. 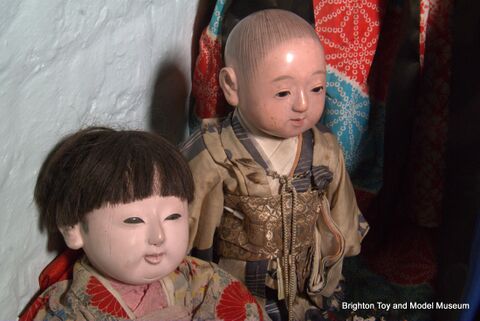 The second doll, immediately to the left, and can seen with a short black bob. The hair of Ichimatsu dolls was often made from human or horse hair. She wears a cream kimono with pink and red patterns. Female Ichimatsu dolls were particularly popular after the 1927 Friendship Doll exchange. Considering the condition of the doll, this suggests that this particular doll can be dated to the 1930s or 40s.

Ichimatsu dolls were the only Japanese dolls which were manufactured with the intention of being played with, their movable limbs and changeable clothing was meant to allow them to be treated and cared for like a human infant. As a child's toy, these particular dolls were used a good-will gifts during the 1927 Friendship Doll exchange between Japan and the West after the First World War.