In the centre of the cabinet is a doll of man pulling a woman in a cart.

The dolls themselves appear to be of poor material quality. Unlike some of the other cabinet dolls, they can be seen wearing relatively cheap clothing, with very little embellishment or decorative pattern. For this reason, these dolls were probably made by a working-class or peasant doll-maker, either depicting a man pulling his wife in a cart, or a servant pulling a wealthy woman. 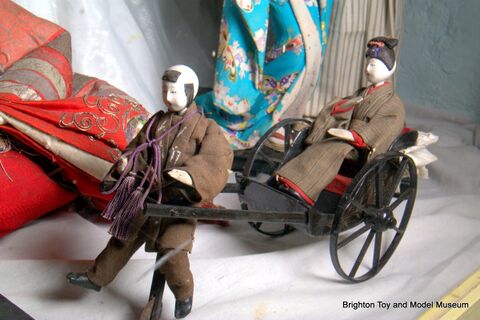 Poor quality dolls such as these would have been made, either for children, or for poorer families to remember or commemorate events in their lives - perhaps times of hardship and suffering. Little else is known about these dolls. Their poor material quality and maintenance is indicative of the late 19th century.