Both are stood beside a tree, both appear to be fashioned from differing materials and possibly by different doll-makers working due to varying skin tone and facial expressions. Both are dressed in traditional armour and furs of dark colouring, with notable Mongolian influence in their military dress. 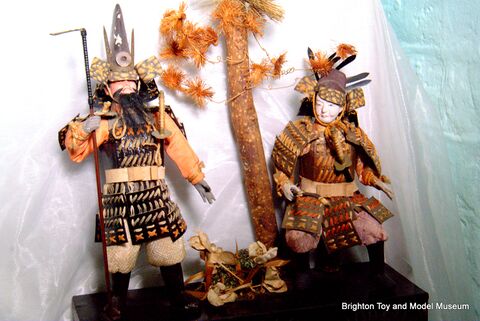 Samurais were traditional Japanese warriors of legend, famed for their loyalty, bravery and honour. Traditionally, Samurais were perceived as the perfect role model for young boys to aspire to. For this reason, Samurai dolls were used in the celebration of the Boy’s festival, originally known as Tango no Sekku, which was later changed into the event today known as Children's Day in Japan, celebrated on the 5th March.