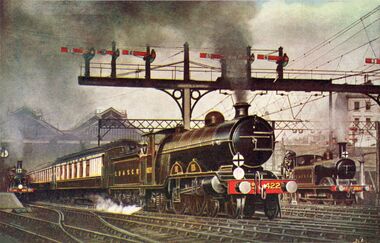 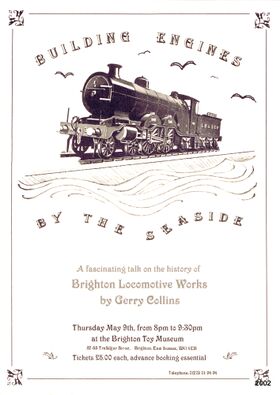 Brighton Locomotive Works (or just, Brighton Works) was one of Britain's earliest steam locomotive manufacturing facilities, and is reckoned to have been responsible for producing over twelve hundred engines, including the E2 Class second-series design used in the illustrations for "Thomas the Tank Engine".

The site of the works can be seen if you exit the Museum, turn left, and look at the newer buildings on Trafalgar Street to the immediate left of the Museum. These occupy a space that was previously railways sidings and the engine works.

As a nod to the site's heritage, many of the roads and walkways in the area are named after railway engineers and designers, or have other railway associations.

Brighton Locomotive Works had a difficult history, due to the geographical awkwardness of a restricted site cut into the side of a hill, which made lack of space a constant problem.

When John Chester Craven took over as Locomotive Superintendent in 1847, his reign, while not exactly disastrous, created acute long-term problems for the Works. Craven's natural inclination, as with many of the early locomotive engineers, was to be a "tinkerer" ... to treat each new locomotive or loco batch as an exciting opportunity for improvement or experimentation, with the result that the number of official locomotive classes that the Works had to support was supposed to be greater than seventy. Trying to maintain servicing knowledge and spares for more than seventy loco types must have been a nightmare. In March 1853, locomotive No. 10 exploded at the beginning of the shift, killing the three people who in the cab. The locomotive had recently been serviced, and the enquiry found that the loco had been so extensively patched and modified that there was little possibility of finding out what had really happened, and while Craven wasn't blamed, questions were probably asked about how the Works had been run under his leadership.

Craven's biggest achievement seems to have been persuading the civic authorities to allow him to remove the hill of chalk rubble on the lower side of the line that had been created when the hillside had been cut into to create space for the station and the main line. While the town was originally against this, they relented when Craven said that his alternative was to remove the works (and its jobs) to a more convenient site further up the line. Completely removing the chalk hill, a little at a time, took many years ... but once it had gone, Craven's successor was able to put the cleared space to good use.

It's perhaps notable that while his successors have roads on the old Works site named after them: Stroudley Road and Billinton Way – nobody seems to have named anything after Craven.

William Stroudley (1833-1889) took over the Locomotive Engineer position after Craven retired, and stayed in post until his death in 1889.

Stroudley immediately set about a process of simplifying and standardising the stock of locomotives and locomotive parts, reducing the range to six classes with as many interchangeable parts as possible. This didn't just reduce the space requirements for storing spare parts, spares could now be more produced more proactively knowing that they would definitely be used, and the easier supply of spares meant that more repairs could be made with drop-in replacements available from stock, speeding up turnaround times and reducing the space needed for locos waiting to be repaired.

Stroudley also encouraged the specialisation of skills – with standardisation, instead of making one spare part for the stores, one could have an identical batch made, ideally by the same person who made the last batch, and who (hopefully) knew that part better than the other people in the Works. Standardisation didn't just reduce costs and space and time, it could also improve quality.

The museum foyer has a display area devoted to Brighton Locomotive Works, including paintings.