A green, clockwork, gauge 0 model of Southern Railway's Stephenson 4-6-4 "Baltic" passenger tank locomotive, running number 329, made by Märklin. The model started being produced some time in the early 1920s, originally in ~1923 brown, and seems to have disappeared by the mid-1930s.

Märklin manufactured versions of the model in both gauge 0 and gauge 1, both of which are on display in the museum. For more detailed information, see the entry for the gauge 1 version. 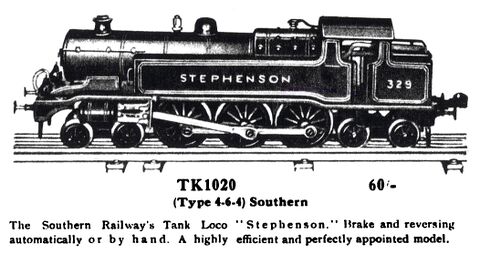