A very nice yellow gauge 0 model of the 0-4-2 LBSCR B1-Class locomotive 214 "Gladstone", made by Miller Swan and lovingly restored by Chris Littledale in time for the launch event for the Seaford 150 anniversary on 7 Jun 2014.

Miller Swan, like Beeson, were "perfectionist" model engineers. At a time when the large Hornby Princess Elizabeth flagship model cost a whopping five pounds, and Meccano Ltd. offered financing to help people buy it, Miller's Gladstone model loco would probably have sold for around twenty-five pounds. 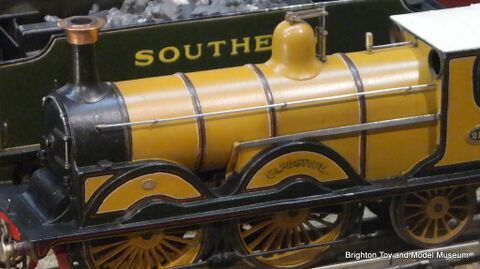 Stroudley's B1 class kicked off with 214 Gladstone in 1882, with locomotives mostly being named after influential people of the day, and is often referred to as the "Gladstone" Class. Thirty-six of the locos were produced at Brighton Works over a period of around nine years

The distinctive (and complex) livery was an ochre colour widely referred to as "Stroudley's Improved Engine Green", a reference to Stroudley's reputed colour-blindness.

Another, larger model of a similar-looking LB&SCR D2 "Lyons Class" loco (308 Como) is on display in Brighton at the Brighton Museum and Art Gallery, but appears rather brown due to the low-level lighting conditions.

214 Gladstone has been preserved by the Stephenson Locomotive Society, and is now at the National Railway Museum, in York.