The Ghost of Jenny Lind (sculpture) 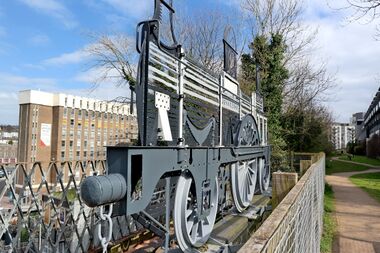 Angled view of the "Ghost Train" sculpture (left), with part of the Brighton Greenway in the background (right) [image info] 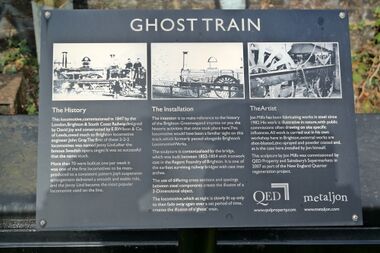 The Ghost Train, also known as The Ghost of Jenny Lind, is a public sculpture by Jon Mills situated on a disused railway bridge that passes over New England Road. The sculpture was commissioned as part of the New England area's redevelopment, and the bridge is now part of a public walkway, Brighton Greenway, that connects to Brighton Station.

The sculpture was commissioned in 2007 and completed in around 2009, but didn't get finally installed on the site until 2013.

Jenny Lind was a famous locomotive produced for the LBSCR in 1847, that was then widely copied for other railway companies.

The intention is to make reference to the history of the Brighton Greenway and impress on you the historic activities that once took place here. This locomotive would have been a familiar sight on this track, which formerly passed alongside Brighton’s Locomotive Works.

The sculpture is contextualised by the bridge, which was built between 1852-1854 with ironwork cast in the Regent Foundry of Brighton. It is one of the earliest surviving railway bridges with cast iron arches.

The use of differing cross sections and spacings between steel components create the illusion of a 3-Dimensional object.

The locomotive, which at night is slowly lit up only to fade away again over a set period of time, creates the illusion of a 'ghost' train.

Jon Mills has been fabricating works in steel since 1982. His work is illustrative in nature, with public commissions often drawing on site specific influences. All work is carried out in his own workshop here in Brighton, external works are shot-blasted, zinc-sprayed and powder-coated and, as is the case here, installed by Jon himself.

This sculpture by Jon Mills was commissioned by QED Property and Sainsbury’s Supermarkets in 2007 as part of the New England Quarter regeneration project.