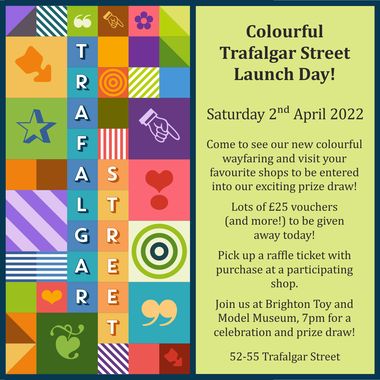 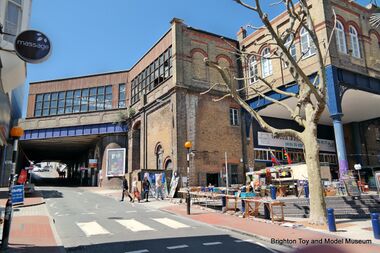 2015: View up Trafalgar Street, with Trafalgar Arches on the right [image info] 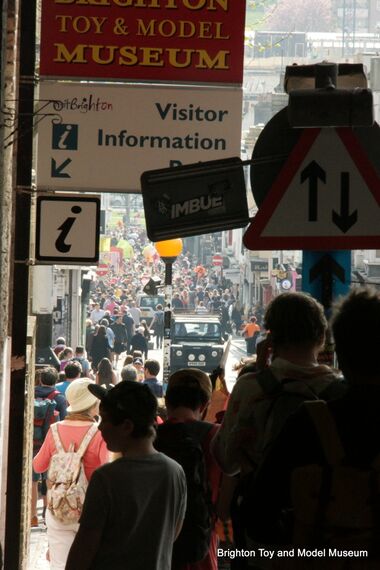 2016: The view down almost the whole length of Trafalgar Street, taken from outside the museum doorway [image info]

Trafalgar Street is a road extending from the front of Brighton Station Eastward to St. Peter's Church.

The Brighton station entrance can be difficult to see, since it emerges through a hole directly in front of the station bounded by railings, and could easily be be mistaken for a private service route or entrance to an underground car park.

The entrance to Brighton Toy and Model Museum is on the North side of the road, near the point where it emerges from underneath the station arches, to the East.

Trafalgar Street would seem to have been named after (in two senses of the word) the naval Battle of Trafalgar (1805), in which the British fleet commanded by Lord Nelson routed the combined French and Spenish naval forces. The street was initialy critically important to Brighton Station, as it was initially the station's only proper accessway, linking the station to Valley Gardens, the main road entrance to Brighton from London. This changed with the speedy creation of Queens Road, which led straight to the station with a less severe gradient, but then had to bridge across Trafagar Street. As the station became busier, the bridge was widened at least twice.

Trafalgar Street – history told in the langauge of pubs

As of early 2022, Trafalgar Street is currently undergoing a "refresh" as part of the "Welcome Back" government scheme to encourage people to rediscover their local high streets after the COVID lockdowns. This is being paid for by funds from the European Regional Development Fund (ERDF).