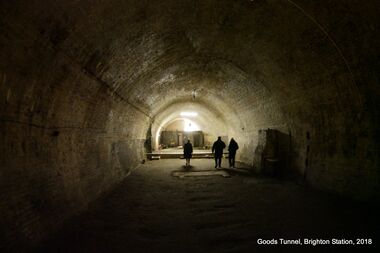 Rifle Range at the blocked-off end of the Goods Tunnel, view looking out [image info] 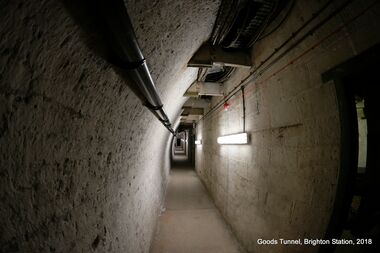 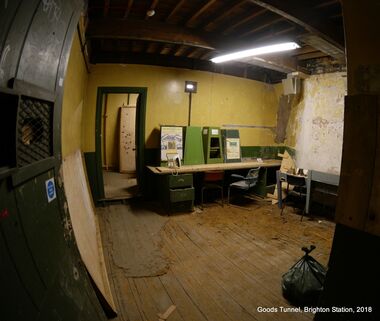 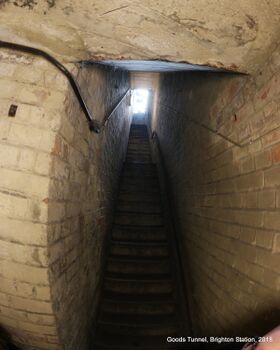 The slope of the land under Brighton Station was so severe that the passenger platforms and station ended up on a dramatically higher level than the goodsyard on the piece of land immediately to the East. While the split between goods and passenger traffic wasn't an immediate problem for trains travelling north or southward in and out of the station, it was a problem for goods trains coming from the West, as there was no obvious polite way to create a track that crossed the main lines to reach the goodsyard area without the trains plunging off a small brick cliff once they passed the station's Eastern boundary.

The station designers originally got around this by having the goods line from Shoreham duck down into a cutting as it approached the station, and then travel under the main lines at an angle through a tunnel that emerged at the lower "goods" level in the gap that can still be seen in the middle of Trafalgar Arches.

However, this wasn't an ideal solution, as the gradient was so steep that some stories talk about laden goods wagons having to be hauled up through the tunnel by horses, one at a time!

Although there seems to have been some talk of extending or rebuilding the tunnel (presumably to lessen the gradient), the solution eventually arrived at was to build a new goods line out of the goodsyard, across its own dedicated bridge spanning New England Road, going through Preston Park, and then arcing around to Shoreham.

The dedicated goods line and bridge then itself became redundant when the goodsyard closed. Although most of the old goodsyard area was then built on, the bridge and a section of line now form the Brighton Greenway.

The top end of the tunnel was blocked off and filled in, the goodsyard entrance still functions (although obviously there's no longer a railway line running through it).

One side of the body of the empty tunnel was partitioned off into offices and storerooms, supposedly as a fallback World War Two command centre for Southern Railway operations. These disused spaces are now abandoned.

The blocked-off end of the tunnel is adapted for use as a rifle range, with people shooting at targets at the blocked-off end (the logic presumably being that nobody can appear unexpectedly at that end and wander into the line of fire).