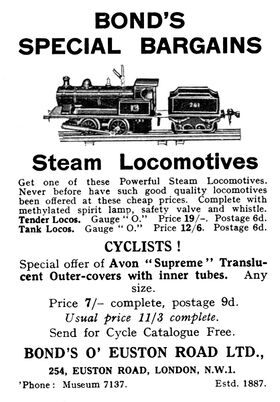 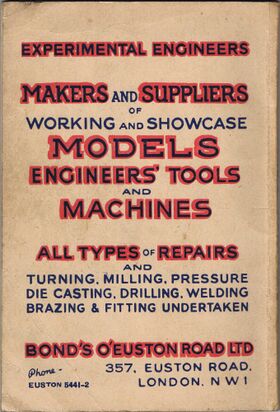 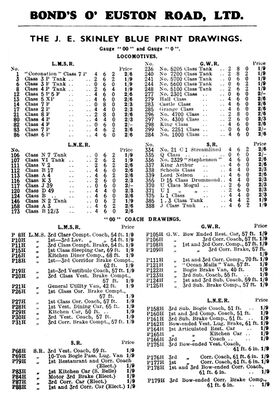 Bond's Ltd (also known as Bond's of Euston Road, and the oddly-abbreviated Bond's O' Euston Road) were a model engineering and model supplies company founded in 1887 (just over ten years before Bassett-Lowke Ltd.), as Arthur W. Bond. The company changed its name in the early 1920s to promote its shop at 254 Euston Road. The shop lasted until 1973, when the Euston Road area was redeveloped.

As well as retailing other company's products, Bond's also manufactured locomotives and carriages and some well-regarded mechanisms and motors that sometimes appeared in other manufacturers products as premium options, with J. Fournerau acting as their agents in France. 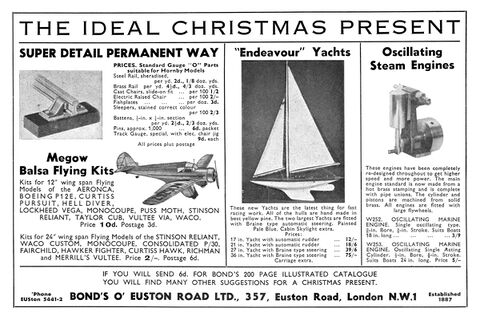 A 1938 advert for Bond's O' Euston Road, showing examples of some of their product ranges

Although the Bond's and Bassett-Lowke engineering product lines and catalogues seemed quite similar, and Bond's had the head start, the company didn't have a charismatic globe-trotting founder like W.J. Bassett-Lowke, sourcing foreign-made goods and building an empire of affiliated companies selling their wares under a single name. Consequently, Bond's never became as big as B-L ... on the other hand, Bonds managed to run their shop and mail-order business without obvious mishap until the 1970s, when the shop was forced to close because of local redevelopment.

Bond's today is chiefly remembered by model engineering enthusiasts who used to frequent the London shop as part of their pilgrimage to an area packed with tool, electronics and engineering parts outlets, and by model railway enthusiasts for their gauge 0 "Bonzone" model locomotive, their Pullman carriages, and for a series of rather nice exhibition-grade locomotive "specials".

Bonds sold model locomotives from a number of other manufacturers, and their own "home-produced" locos are comparatively rare.

A notable "Bond's-produced" piece was the well-respected gauge 0 Bonzone ("Bond's Own") locomotive, a model of the Peckett saddle-tank industrial locomotive used in collieries, quarries and docks.

" This scale model is BOND's own production, and follows true Peckett lines with semi-elliptical boiler and correct type boiler mountings, steps, and buffers, etc., is fitted with a mechanism having the true type of iron driving wheels, which are turned to a special profile, allowing this model to run on tinplate or true-scale tracks. "

The "Bonzone" was a nice addition to gauge 0 enthusiasts' collections, as it was distinctively different to most of the products from other manufacturers, it ran reliably, and its short wheelbase meant that it could cope with the curves of almost any gauge 0 layout.

The museum's central gauge 0 layout includes examples of the No.1 and No.2 Bonzone locomotives, two passenger carriages (one of which is a Pullman), and a rare exhibition model of one of the two early LMS prototype diesels (10001). 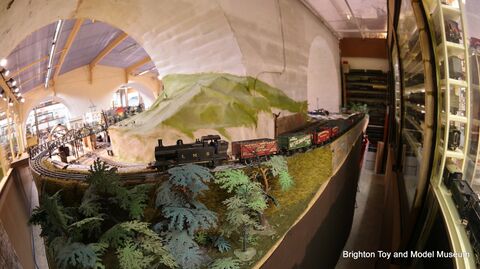 A Bond's tank loco on the main layout