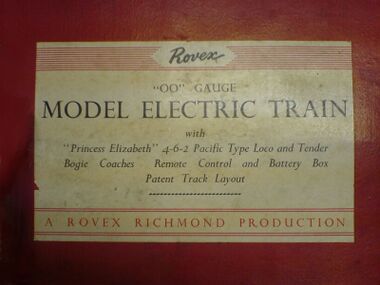 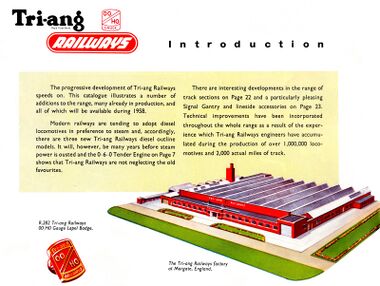 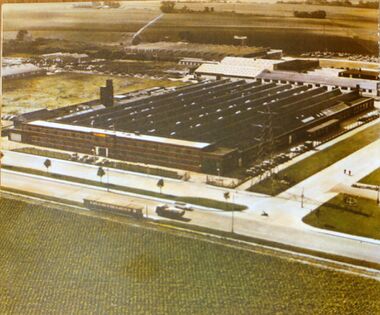 Rovex Plastics Ltd was set up just after the end of World War Two in Richmond, West London in 1950, and produced budget plastic train sets. Lines Brothers wanted (and needed) specialist knowledge and plant for the new plastics manufacturing techniques, and promptly bought Rovex in 1951, creating Tri-ang Rovex. With Lines Brothers' financial backing and distribution "clout", the company was moved into a new custom factory site in Margate, and became one of the largest local manufacturing employers.

With Lines Brothers' forward-looking investment and distribution base, and Rovex now acting as the main Lines Brothers' plastics manufacturing facility, the Rovex-produced model railway sets continually improved in quality compared to the earlier cruder sets, and as Tri-ang Railways, the company's products became a serious competitor to the Hornby Dublo and Trix Twin railway ranges, seriously undercutting their prices while steadily improving in quality.

While the other companies belated started introducing plastics too, and Meccano Ltd tried to migrate its user-base to cheaper Triang-style two rail track, Triang's price advantage was ultimately too great, and Meccano Limited folded and were taken over by Lines Brothers in 1964. Now owning the Hornby name, after a few years to clear the remaining Dublo stockpiles, Triang's new "Hornby" range that took over in the late Sixties was almost exclusively based on Rovex/Triang designs rather than on the previous "Meccano Ltd. Hornby" Dublo designs.

And so it was that Triang Rovex became Tri-ang Hornby. As of 2015, the modern Hornby company is still based at the Rovex works in Margate, although the surrounding regions are now concreted-over industrial estate and shopping centre-style buildings, rather than the cabbage fields that surrounded the site in the 1960s.