The Gauge 1 format is supposed to have been "invented" by Märklin in around 1891 when they showed their very first trains. Although the format was quickly supplemented a few years later with the slightly smaller gauge 0 format (which became dominant in the wider market), Märklin seem to have remained fond of gauge 1, and made a point of declaring that almost their entire range was available either in gauge 0 or gauge 1 right up until the outbreak of WW2 disrupted production. Other companies that had entered the market after the First World War tended to ignore gauge 1 and just support gauge 0 (and then move on to smaller newer gauges). However, Märklin had an existing G1 customer-base that they would not have wanted to abandon.

Gauge 1 also did have certain manufacturing advantages, in that it was easier to build very accurate models in the larger scale (especially if they were steam-powered). Again, newer manufacturers entering the market after WW1 tended to "skip past" steam-powered locomotives and only produce "electric", or "clockwork and electric" ranges, leaving Gauge 1 as a more specialised market with fewer long-established competitors (especially after the demise of Märklin's South-German competitor Bing in the mid-1920s). 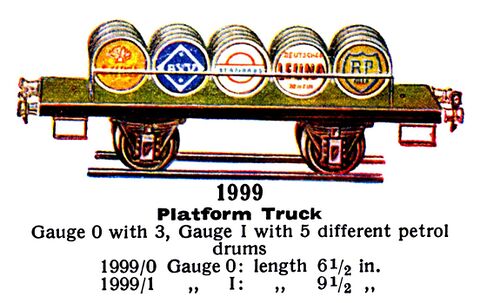 1936: Petrol Drum Wagon 1999. Rather than rescale the drums, the gauge 0 version holds three drums and the gauge 1 version comes with five.

The company's ongoing investment in gauge 1 was not entirely without downsides, as companies who concentrated on the smaller scales were forced to embrace advances in technology and technique that would allow them to make accurate working models in smaller sizes. Märklin occasionally seemed to be lagging behind in this regard, and a comparison of the museum's gauge 1 and gauge 0 Märklin models of the Stephenson tank loco show the gauge 1 version to be quite nice, but the gauge 0 version being perhaps more awkwardly out of scale than one might have expected from a major manufacturer of the time (Märklin's thinking possibly being that if one wanted a better version of the model, one should buy the larger gauge 1 version).