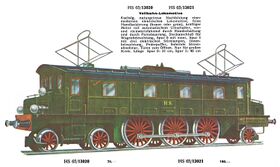 A brown gauge 1 110V electric model of a Be 4/6 early electric locomotive designed for the Gotthard Railway in Switzerland. The unit has brown panelling, a black roof and sidebars, and sprung metal overhead pantograph power pickups.

The model was made by Märklin circa 1924 in gauge 0 and gauge 1 (the gauge 1 version was catalogue number HS 65/13021), and still appeared in brown in the 1931 catalogue – by the time of the 1932 catalogue the locomotive's colour had changed to green. 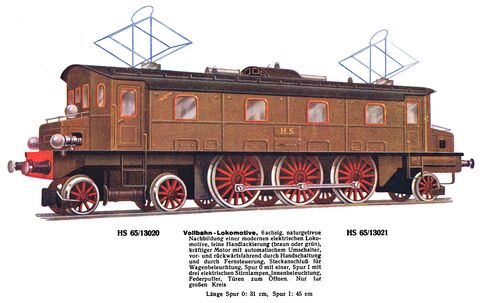 The Gotthardbahn was the fourth railway to run through the Swiss Alps, with its first sections opening in 1874. Four "Be 4/6" locomotives were ordered in 1917 as part of a programme to explore electrification.