The model was made by the German company Märklin between 1903 and 1907, and runs on 110 Volt power (Märklin catalogue number apparently D 3021 Ch. D., where "CH.D." stands for "Charles Dickens"). Marklin made versions of the loco in gauge 1 and gauge 2, powered by clockwork or electric motors. 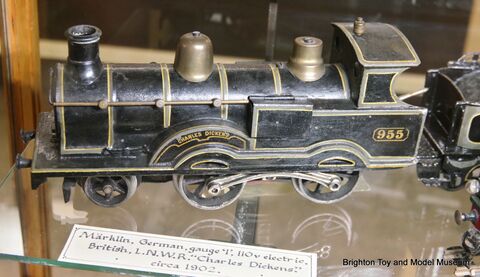 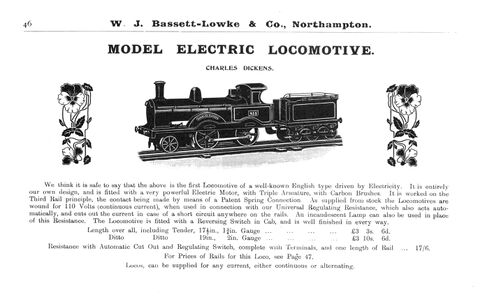 The loco is widely accepted as being a Märklin locomotive, and was sold through other outlets in addition to B-L, so B-L's statement that "It is entirely our own design ..." seems a little odd. Perhaps B-L might have sent Märklin plans or designs for the loco and asked them to manufacture it, but the degree to which the two companies might have cooperated isn't known to us, B-L might simply have suggested the loco as choice and sent some pictures and sketches, or might have had one of their engineers draw up the plans for the full model ... or they might have designed just the bodyshell to go with a Märklin motor. We don't know.

While there's no doubt that this is the Märklin's 1900s electric gauge 1 model Charles Dickens locomotive, attaching an original Märklin model number is tricky. The Vaterlein/Wagner book seems to list it as illustration D127, E Spurweite I, catalogue D 3021 Ch.D. 1903-1907, and the corresponding illustration does seem to relate to the loco, including the flip-up hatch on the corner of the water-tank ... but appears to be missing a coupling-rod and lettered 1082 rather than 955. Illustration D97 has the coupling-rod (although ours is curved rather than straight), and the correct 955 numbering ... but also shows a headlamp, is missing the hatch, and is listed as being the clockwork version, D 1021 Ch.D..

On principle, we dislike identifying models based on secondary sources, but we're assuming that the book captioning is correct, that this is D 3021 Ch.D., and that the discrepancies are either due to production variations at Märklin, or to the fact that the same catalogue image was probably used for both the gauge 0 and gauge 1 electric versions ... perhaps the book's reproduced image is of the gauge 2 version, which shared the same original Märklin catalogue entry? Might the gauge 1 and gauge 2 loco models have carried different running numbers?

The loco appears in an original 1904 Bassett-Lowke catalogue in our archives, but this doesn't display a catalogue number.

We think it is safe to say that the above is the first Locomotive of a well-known English type driven by Electricity. It is entirely our own design, and is fitted with a very powerful Electric Motor, with Triple Armature, with Carbon Brushes. It is worked on the Third Rail principle, the contact being made by means of a Patent Spring Connection. As supplied from stock the Locomotives are wound for 110 Volts (continuous current), when used in connection with our Universal Regulating Resistance, which also acts automatically, and cuts out the current in case of a short circuit anywhere on the rails. An incandescent Lamp can also be used in place of this Resistance. The Locomotive is fitted with a Reversing Switch in Cab, and is well finished in every way.

Resistance with Automatic Cut Out and Regulating Switch, complete with Terminals, and one length of Rail   ...   17/6

Locos can be supplied for any current, either continuous or alternating.

Charles Dickens was an "Improved Precedent" or "Jumbo" Class locomotive. Designed by F.W. Webb, more than one hundred and sixty of the "Jumbo" class locomotives were built at Crewe Works between 1887 and 1901.

Of these, No.955 Charles Dickens (built in 1882) was arguably the most famous, and holds the world record for distance covered by a steam locomotive, having traversed over two million miles over its twenty years running the Manchester to London service.

One of its sibling locomotives, 790 Hardwicke, is preserved at the National Railway Museum.