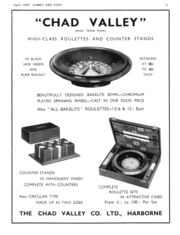 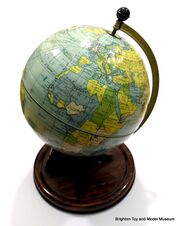 The Chad Valley company produced a wide range of boardgames and toys, including teddybears and kindergarten toys.

Chad Valley started out as a Birmingham printing company set up by Joseph and Alfred Johnson in 1860. In 1897, they opened a factory in nearby Harwell, though which ran the river Chad (actually more of a stream). The region was known as Chad Valley, and the factory became known as the Chad Valley Works.

The company continually expanded its range of manufacturing options by acquiring other companies with different manufacturing focii, such as Isaacs and Co.. for their soft toys, and Skaymo Ltd. for their wooden blocks.

We have received from the Chad Valley Co. Ltd. a copy of their new 1939 catalogue. The firm are to be congratulated on this excellent publication as it is entirely printed and published at their own works. The printing is of high quality on art paper, while the illustrations are beautifully reproduced in black and white and full colour. Practically every item in this catalogue is illustrated, and the whole is set out and well indexed in such a manner so as to enable any individual line to be found in a matter of seconds.

The range of boxed games is large, and the prices suit all pockets. It includes all the popular favourites such as ludo, snakes and ladders, draughts, word-making, tiddley winks, solitaire, skittles, table tennis and compendiums of games. The prices are from 6d. to 7s. 6d., while the racing game, "Escalado," retails at 7s. 11d. Included in these games is a large selection of target shooting items. As the trade knows, this firm are the manufacturers of Walt Disney character games, and these are produced by arrangement with Walt Disney – Mickey Mouse Ltd. The "Snow White" games number many, such as table quoits, picture cubes, bagatelle, shooting, skittles, etc., and retail from 1s. to 7s. 6d. "Mickey Mouse" lines feature such numbers as jig-saw puzzles, at. 1s. and 2s.; picture cubes, at 2s. 11d, and 3s. 11d.; bagatelle, quoits, shooting gallery, Waddling Donald Duck, Hiawatha's Safety Archery, spell-game, and "Ferdinand the Bull" shooting game. The latter, which retails at 5s., is one of the new additions to the "Mickey Mouse" series of games, and shows five circular targets set in a bull-fighting arena. As these targets are hit they fall backwards and bring up into position toreadors with Ferdinand the Bull in the middle. There is a large selection of "Mickey Mouse" pull-along toys, which include Mickey Mouse Motor-Car, Donald Duck Drummer, Flip-flap Donald, Quacking Donald Duck; Mickey Mouse and the Donald Duck Rowboat.

The firm under review cater for the kindergarten trade and have several items which are both entertaining and at the same time sense-training. They are dealt with in a subsidiary list. These include building and threading cubes, beads on sticks, graduated peg blocks, playtime clock, peg mosaic, hedgehog or tower wagon, peg numbers and giant beads. No review of "Chad Valley" lines would be complete without mentioning the jig-saw puzzles. These are beautifully made, with illustrations in full colour, covering a wide series of subjects. One of the most popular is H.M. the King and Their Royal Highnesses the two Princesses on horse-back in Windsor Park. There are three editions retailing at 1s., 3s. 6d. and 5s. Another favourite is the picture of Their Royal Highnesses Princess Elizabeth and Princess Margaret Rose, retailing at 3s. 6d., and this forms a charming - study in full-colour, with Windsor Castle in the background. His Royal Highness Prince Edward is another subject, and this is a most pleasing outdoor study of the young prince. This retails at 2s. 6d. Other series include seven subjects from the pages of the renowned Illustrated Newpapers at 3s. 6d., G.W.R. Puzzles at 2s. 6d. and 5s., and Cunard White Star ranging from 6d. to lOs. 6d.

The last section of this list is entirely devoted to soft toys and dolls. The range, which has always been popular, has had many new additions, and the items are up to the usual "Chad Valley" high standard of production. In the animal world there are teddy bears, polar bears, koala bears, kangaroos, panda bears, rabbits, foals, lambs, ducks, ponies, etc. These can be obtained either as realistic and well-designed models or as humorous, dressed mascot toys. The collection of dogs is large, and includes all the popular favourites, such as Cairn terrier, Scotch terrier, Welsh Corgi dog and bulldog. Popular series for kiddies are the " Bed-time toys, of which there are six numbers, and "Cuddlechums." The former have been specially designed for children, with just sufficient filling to give a "pillow" effect. Eyes, buttons, etc., are all made from soft materials, eliminating all fear of harm to the tiniest kiddie. They are covered in superior art silk plushes in attractive colour combinations which will satisfy every child's inherent love of bright things.

A range that is equally suited to children and adults is the special "Wee-kin" mascots, in which all the toys are made from excellent-quality materials, brightly coloured and kapok-stuffed. They include dogs, pigs, niggers, jesters, rabbits, lambs and fuzzy bears.

Popular lines are the Royal Family dolls, and include H.R.H. Princess Elizabeth, H.R.H. Princess Margaret Rose, H.R.H. Prince Edward, and H.R.H. Princess Alexandra. The Princess Elizabeth and Princess Margaret Rose dolls have been approved by Their Majesties the King and Queen, and the Prince Edward and Princess Alexandra dolls by Their Royal Highnesses the Duke and Duchess of Kent. They are made in velveteen, and are fully jointed, while the "Chad Valley" heads are specially modelled from likenesses of the originals, and are fitted with curly, hand-woven wigs. They are dressed in clothes as worn at the present time by the Royal children themselves. The Princess dolls are supplied either blue or pink colour schemes.

Another popular series is the "Snow White and the Seven Dwarfs" dolls which are beautifully made, and are extremely good reproductions of the original Walt Disney characters. "Snow White" can be obtained fitted with two different musical numbers from the film, if desired. They are "Some Day My Prince Will Come," and "With a Smile and a Song," and the dwarfs can be had playing "Heigh-ho" and "Whistle While You Work." Also included are animals from the film, such as fawn, sitting rabbit, begging rabbit, etc.

The "Chad Valley" "Bambina" dolls are the most beautiful and luxurious. They are modelled with felt or velveteen body and limbs, "Chad Valley" heads with curly hand-woven wigs, and dressed in a variety of smart designs and materials. They are supplied in three sizes. Other series of dolls include the "Carina," Popular," "Bambetta" baby dolls, long-clothed baby dolls and carnival dolls.

It is impossible in the short space at our disposal to give a really detailed and comprehensive survey of all the lines manufactured by this firm, but The Chad Valley Co. Ltd. will be pleased to send copies of this most attractive catalogue to all bona fide enquirers, and buyers should make a point of obtaining a copy if one has not already been sent them. As our readers know, the Chad Valley headquarters are Chad Valley Works, Harborne, Birmingham 17.

Immediately after World War Two, Chad Valley hooked up with Metal Box (who had now absorbed Barringer, Wallis and Manners) to sell Chad-Valley-branded versions of some of the metal toy designs that BW&M had acquired from Burnett, including the Ubilda range and Burnett's range of tinplate buses and cars.

Where many of the larger players in the UK toy industry had had a background in metal toys and struggled to reinvent themselves to be able to cope with plastics production, Chad Valley had a good plastics manufacturing base but was missing the capability to produce "old-fashioned" metal toys, which made them an ideal business partner for Metal Box, who had the production capacity and designs for metal toys, but no distribution path into the toy market.

The association with Metal Box became so successful, and produced so many products, that Chad Valley soon started to consider getting their own manufacturing capability for these sorts of tinplate and tinplate-and-clockwork toys themselves, buying Winfield Ltd. for the company's ability to make clockwork motors, and Hall and Lane Ltd. for their expertise in metal boxmaking. They also acquired A.S Cartwright who made toy kitchen sets and teasets, and Glevum Toys.

In the 1970s, Chad Valley was bought by Palitoy, via Barclay Toy Group, and the name eventually ended up being sold to Woolworths in the late 1980s