A brightly-coloured tinplate Snow White Bagatelle game made by Chad Valley under licence from Walt Disney, perhaps in the late 1930s or the 1940s. 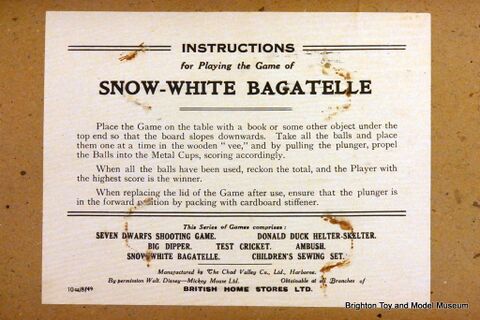 The game is designed to sit inside its lid for a little extra rigidity. The back panel is yellow, with named images of each of the seven dwarfs, Snow White (centre), and some woodland animals.

The game has a white label with manufacturer and licensing details, which has a list of other games in the series, including a Donald Duck Helter-Skelter and a Seven Dwarfs Shooting Game ... which we're hoping is not as bad as it sounds!

We haven't yet dated this piece exactly – Disney released the film in 1937, and we'd expect it to have been produced not long after ... but the Snow White brand remained marketable for decades, so it might be 1940s. The box label carries the code 10ci[?]/8/49, which might signify 1949.