From The Brighton Toy and Model Index
(Redirected from JEP)
Jump to:navigation, search 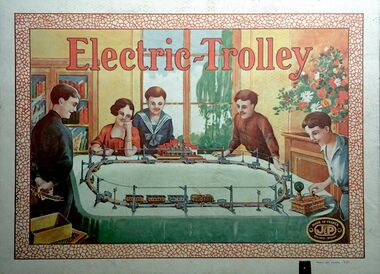 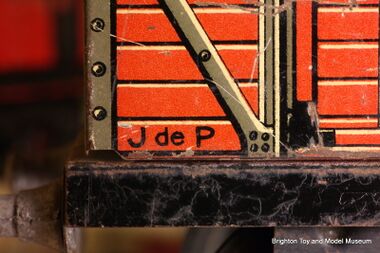 Jouet de Paris was founded in 1902 by Roussel and Dufrien to create a common toy marque that would include not just their own toy company's output, but also include the products of a multitude of small creatively-fertile "ferblantier" or "tinsmithing" companies that were dotted around Eastern Paris (the UK had a similar network of cottage industry factories and homeworkers that would produce penny toys and sell them through travelling agents, but worked predominantly in wood rather than metal). Roussel and Dufrien recognised that while Parisian toy manufacturing had a healthy design and manufacturing base, a single catalogue and branding would make it easier to market the products.

Roussel and Dufrien had already started including some other other key marques in their catalogue in 1899, and this process came to fruition in the first 1902 Jouet de Paris catalogue. G. Potier owned the "Dessein" brand (DS, 1878-), and had already merged it with Faivre (FV) to produce FV-DS, and apparently already organised some sort of deal with Vilain and Lefevre, and the 1902 catalogue incorporated a diverse range of product lines that also included the output of Douliot, Leconte & Cie, Duclos, Tantet, Manon, and Richard Freres (RF).

After the company's bankruptcy it was taken over by the Société Industrielle de Ferblanterie (SIF) in 1909 - SIF having been founded in 1899 as a similar organisation that had amalgamated a more generic collection of metalworking companies.

Jouet de Paris' trademarking went though a variety of versions, starting as JP, then J.d.P. , J.de.P. , and finally JEP (in the late 1920s).

However, due to the considerable chronological overlap between the different logos in use, the version that appears on a piece is of limited use for dating purposes.

After a pause due to WW1, Jouet produced their first electric trainset in 1925, and their first 4-6-0 version of their Fleche d'Or train set - modelling the high-speed luxury train service operating on both sides of the English Channel, and referred to in the UK as the Golden Arrow - appeared in 1928-29. The set marked a high point for Jouet, and is referred to in the Lamming book as "one of the prettiest toy-trains ever made". Jouet's model railway output began to specialise in very French railcar models, along with planes and boats, and "modern" streamlined cars that showed the characteristic heavy-duty JEP construction. The company also briefly produced a Meccano clone called "Mecanic", but were quickly forced to withdraw it after legal action from Meccano Ltd., and resurrected the set, sans holes, as a more hands-on system called "Forgeacier" in which the owner had to make the holes themselves.

As with most other contemporary toy companies, Jouet's business continued to expand during the inter-war years, until the outbreak of WW2 in 1939.

The product line that reappeared after the war was more cut-down and didn't show the same rate of new products, although it did see the launch of a range of "proper" 00-gauge trains with cast ZAMAC bases, and the Dinky-Toy-like Miniajep range of toy cars. The introduction of casting techniques paved the way for the introduction of plastics, first as replacements for existing metal parts, and then in full designed-for-plastic toys.

By the 1960s, the SIF parent company had diversified into a broad range of more profitable industries including computers and parts for nuclear power plants, and as JEP's business began to look less healthy, the Montreul factory was closed in 1964, and the business finally shut down in 1968.