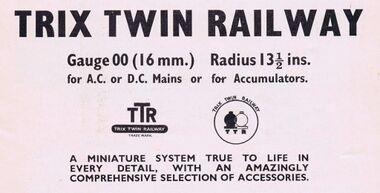 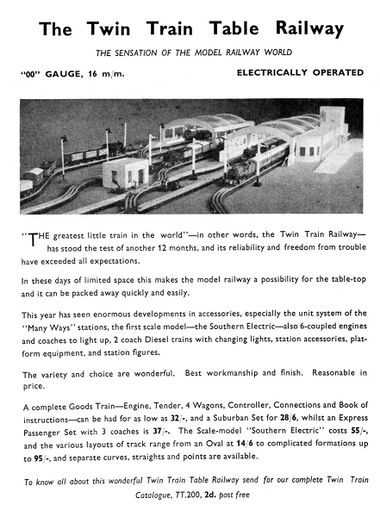 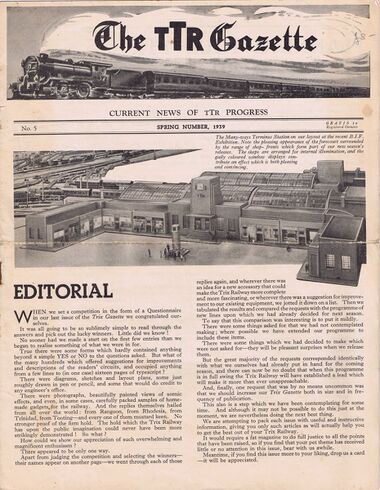 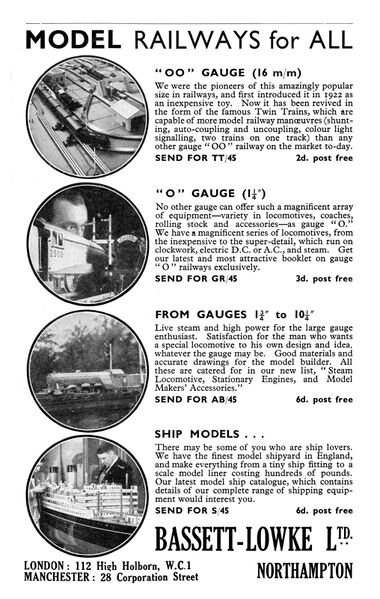 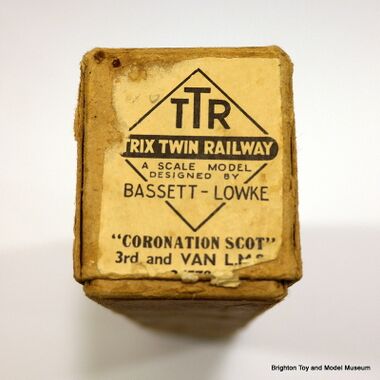 In the early 1930s, Stefan Bing had left the Bing company before it folded, and acquired a new metal toymaking business that had then started producing Trix construction sets. The new company was then persuaded by W.J. Bassett-Lowke to "have another go" at producing an 00-gauge model railway system, a previous agreement between B-L and the Bing company having been responsible for the trail-blazing (but short-lived) Bing Table Railway system in the 1920s. The new system, which cleverly exploited a three-rail track to allow independent control of two locomotives on the same track, appeared in the UK as the Trix Twin Railway (TTR). After setting up Trix Limited in the UK, Stefan felt the need to relocate out of increasingly Nazi-dominated Germany, and moved to the UK. The TTR mechanisms were initially manufactured in Germany with the British-outline bodyshells produced in the UK, but as relationships between England (and Stefan) and Germany became more strained, the need to manufacture in the UK led to progressively more manufacturing beign carried out in the UK, at Winteringham Ltd. (an affiliate of Bassett-Lowke) and other sites.

The product lines of Trix Limited and the original German Trix company then diverged, with the German HO-scale trains continuing to be sold under the name Trix Express. 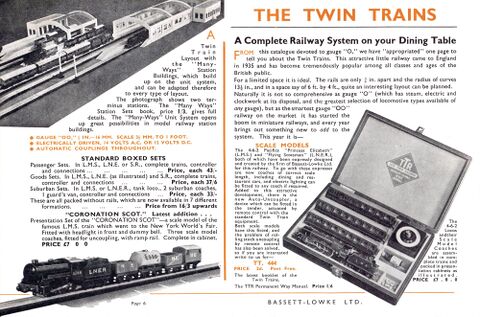 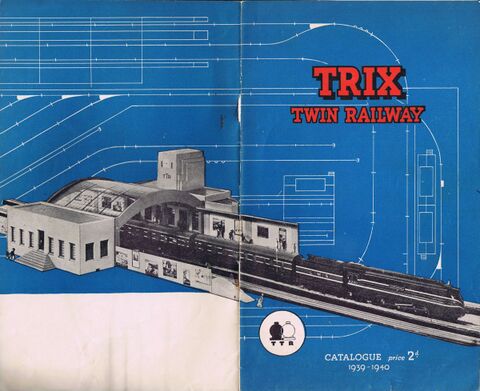 The TTR range seems to have been a cause of friendly tension between Stefan and W.J. Bassett-Lowke, with both men trying to put their own mark on the range. Trix included ideas from both companies' personnel, and for a while there appeared to be some internal competition about naming. A catalogue from 1937 shows the TTR logo and name on almost every page inside the catalogue, but the catalogue's cover instead announces "The Bassett-Lowke Twin Train Table Railway".

This marked an odd period for TTR, with Stefan Bing being firm that this was his Trix system, and W.J. advertising the sets as "Designed by Bassett-Lowke", apparently removing the Trix name wherever possible, and helpfully explaining that "TTR" stood for "Twin Train Table Railway" (TTTR!). With Stefan distributing production around a number of factories to avoid concentrating too much power in the Northampton factory that was subject to influence by B-L, some trains even show signs of having been painted with the Trix name, and then overpainted with the B-L version of the TTR name.

Bassett-Lowke promoted the TTR range quite heavily in advertising and in their catalogues (as "theirs"), and in late 1939, their three-circle adverts promoting their three main "consumer" businesses - model ships, gauge 0 trains and larger-gauge railways - gained a fourth circle for the 00-gauge Trix range.

TTR – The Greatest little Train in the World

Imagine a model railway, working from electric mains or batteries, which besides looking like the real thing, works like the real thing! Two trains running simultaneously at different speeds, forward or backward, fast, slow or very slow, on the same track if you like – that's the Trix Twin Railway. Each locomotive is separately controlled and can be made to shunt as in real railway work, just by pressing a button. The locos even couple up to their own rolling stock, thanks to an ingenious automatic coupling device.

All the Trix accessories are constructed with the same eye for exactness of detail as the trains themselves. The permanent way is built up in sections on bakelite bases and can be fixed or unfixed in a moment. A complete range of Trix "Manyways" Station Sets enables you to construct anything from a suburban station to a main line junction.

We were the pioneers of this amazingly popular size in railways, and first introduced it in 1922 as an inexpensive toy. Now it has been revived in the form of the famous Twin Trains, which are capable of more model railway manoeuvres (shunting, auto-coupling and uncoupling, colour light signalling, two trains on one track) than any other gauge "00" railway on the market. 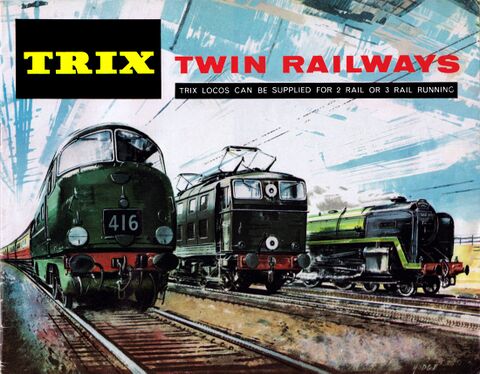 Trix Twin Railways catalogue cover from ~1963, showing steam, electric and diesel locomotives. The cover points out that "two-rail" is now an option

When the war shortages receded it became clear that in the new environment, 00-gauge was the future of model railways in the UK, with TTR pitted head-to-head with Hornby Dublo, which had launched in 1938. Although the Trix range was technically innovative, the finish and external engineering on the Dublo range was nicer - Dublo wheels looked less clunky than their Trix brethren, and Meccano Ltd was able to pour more resources into Dublo than B-L were with Trix. Dublo also embraced two-rail running (after a painful migration from three-rail), which was something that Trix couldn't do without losing their unique selling point of having two trains on a single track.

TTR and Dublo were both then undercut by the new cheaper plastic trains and rolling stock from Triang, and when Lines Bros took over the Hornby brandname and used it to sell plastic-bodied trains (whose quality and detailing continued to improve), Trix found themselves in the unenviable position of having a system that seemed less detailed (and was less well-resourced) than Hornby, who had the double advantage of the stronger "expensive" brandname and marketing, coupled with the cheaper-to-produce Triang-based product. 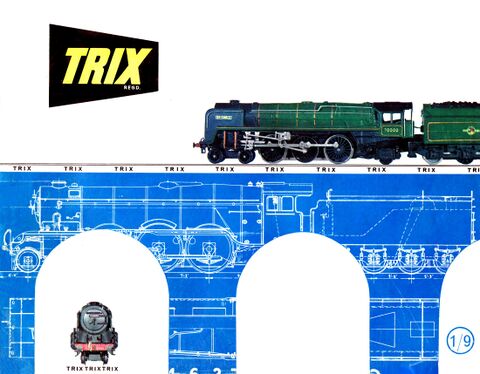 The new catalogue that appeared with a January 1964 flyleaf date now described the company as "British Trix Ltd., with a "Courtalds Group" logo. The company history in the 1964 catalogue emphasises the company's past migration towards plastics and two-rail-compatible locos, the move towards DC (direct current) systems rather than AC that had started in 1956, and the standardisation of track (heights, points spacings and segment lengths) to make the system interoperable with other companies' products and accessories.

The move to wards maximum compatibility wasn't just for the customers' benefit, as the '64 catalogue says:

" The New TRIX range has been enlarged considerably with equipment from some well-known manufacturers on the Continent, including Trix Express, Liliput and Tempo. Items from these ranges are completed in this country, fitted with British scale wheels and Trix couplings. "

At this point, the new "rationalised" Trix company was probably easier to manage, selling a wider range of trains and accessories without having to create the tooling themselves ... but was also arguably no longer a pure "source" company, as many of the pieces in their range were no longer designed in-house, but imported and adapted. Ironically, having previously broken away from Bassett-Lowke to retain their independence, they'd now adopted Bassett-Lowke's business model.

This period saw Trix being taken over by the German Trix company and production moved to Wrexham, under Thernglade Ltd. This continued until 1973, when the Trix brand became part of Rovex.

The following 48 files are in this category, out of 48 total.