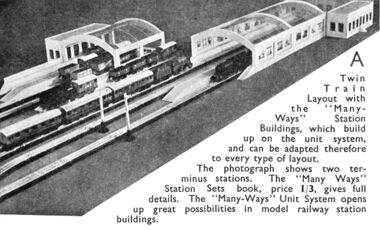 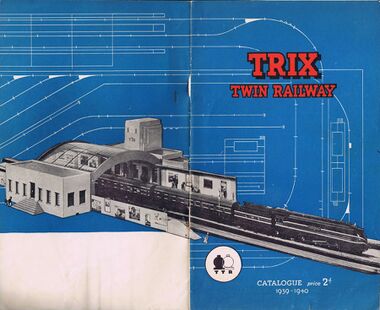 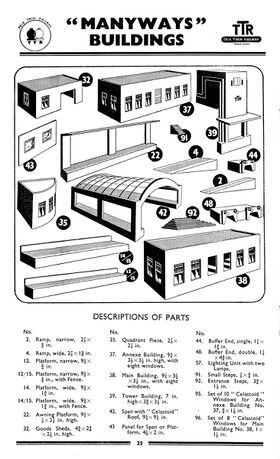 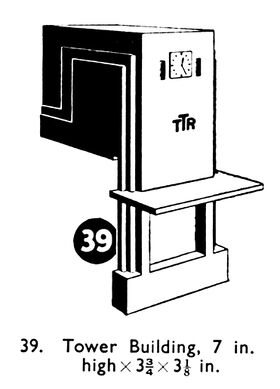 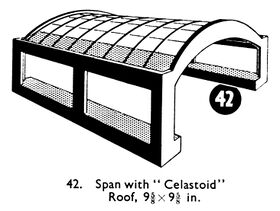 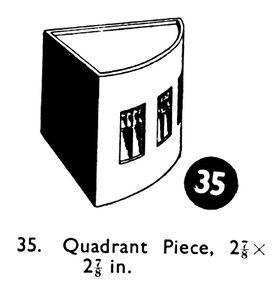 The Trix Twin Railways (TTR) Many-Ways range of 00-gauge station buildings (aka Manyways, and Many Ways, without the hyphen) was designed for Trix by Ernest Twining and introduced in 1937 to accompany the Trix Twin Railways range. The range appeared in catalogues from Trix and Bassett-Lowke.

The origin of the first Trix station-building models goes back to a larger gauge 0 London Underground station model designed by Henry Greenly for Bassett-Lowke. The model had a distinctive square tower at one end with the "Underground" symbol, but the design was so nicely proportioned that Trix and Bassett-Lowke asked Greenly if they could use the same design, scaled down, as a generic railway station model for 00-gauge (with the "London Underground" roundel replaced by a station clock).

This Greenly-derived design was the centrepiece of the early Trix Express trackside building range (sold in Germany as "Trixstadt").

Ernest Twining was then asked to produce a large 00-gauge wooden display station for the Bassett-Lowke shop at 112 High Holborn, and obliged with a monster Art Deco station with its track raised one story above ground level.

This resulted in Twining being commissioned to produce the Many-Ways range designs, a set of modular building components that could be assembled in "many ways" to produce a range of different station buildings.

It had already been been common for large model railway stations to be produced in two pieces – an arch-roofed platform, and a station building that could be placed alongside the platform to make a through station, or placed at one end to produce a terminus station. "Manyways" took this early modular concept and extended it in a way that allowed Twining to exercise his architectural ambitions to produce large station models, while applying his design ingenuity in reducing them to a minimal number of general-purpose pieces, so that the company weren't stuck with a large station model that was too large to be commercial, and had a set of D-I-Y station pieces that could be used to produce more modestly-sized station buildings that might actually sell in significant numbers.

Twining's initial designs were somewhat extravagant in their size and level of Art Deco detailing compared to the final production models, with Twining perhaps initially "shooting high" in the expectation that his plans were likely to be "toned down" by the company, with the initial designs showing higher clocktowers, greater station track-spans, taller buildings, and more ornate Art Deco ornamentation.

The Manyways system included a generic rectangular block-building that could be used "as-is", or which could have a central tower and protruding Art Deco entrance clipped onto its front to convert it into a stand-alone station building, or the centrepiece of a larger station structure. Additional block-building pieces could be added as flanking station "wings", with curved quarter-circle joining-pieces that strengthened the Art Deco theme (Greenly had initially wanted the main buildings to have rounded edges, but had had to make do with "exporting" this design theme to the curved joining-pieces).

In around 1938/39, Trix and Bassett-Lowke announced a further degree of sophistication in the form of a set of add-on shop frontages that could be added to the standard building, with their own lighting, so that a station with extensions could have its own shopping arcade. Unfortunately, these didn't go into production (although it's not clear whether this was due to the outbreak of war in 1939, or whether it was an earlier commercial decision). Because of the cancellation of the shop units, we never quite saw the full implementation of Greenly's concept.