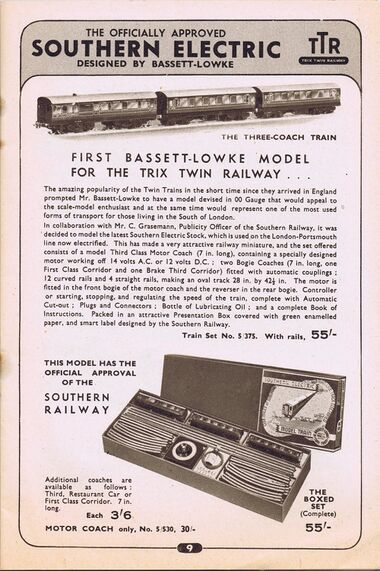 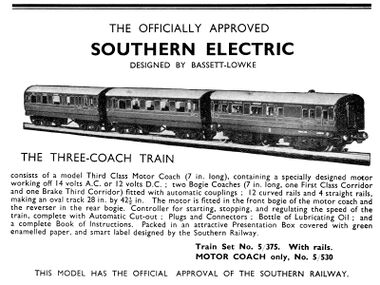 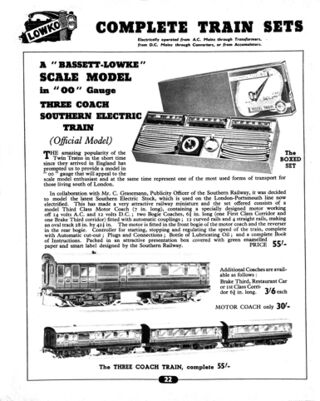 The standard set consisted of a green three-coach electric train in Southern colours, a controller, and enough included track to make an oval.

It was also possible to buy a single electric coach from the set (catalogue number 5/530), and some catalogues also volunteered that additional coaches were also available for 3'6 each: "Third", "Restaurant Car" or "First Class Corridor" (but didn't necessarily give ordering numbers for them). 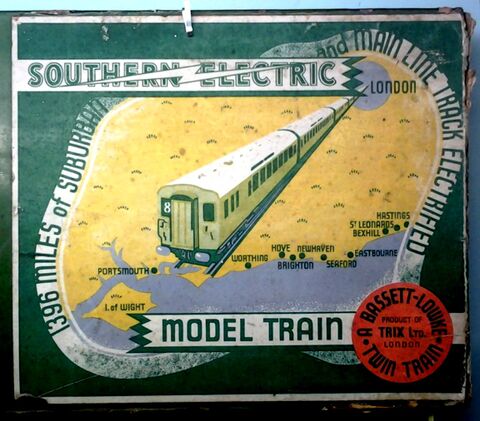 Since Bassett-Lowke and their affiliated companies had no real engineering experience of making trains this small, and the Trix personnel included people who'd helped pioneer the format at Bing in Germany, the hookup between Trix and Bassett-Lowke initially involved Trix designing the critical engineering and making the trains, and B-L using their local knowledge to design superstructure and liveries compatible with the UK market.

The Southern Railway electric train set was the first fruit of this partnership, and Bassett-Lowke went to great pains to emphasise the Britishness of the set, with the special green box and the tiein with Southern demonstrating to the Trix company just how valuable B-L's contacts and local knowledge were likely to be.

This is another typical "long" TTR box, with a large square sticker at one end showing a perspective view of a longer "Southern" electric train against a map showing the coastal Southern stations, with the train emanating from the part of the map marked "London".

It's a green box, and a green sticker, to match the green Southern livery.

" Packed in an attractive Presentation Box covered with green enamelled paper, and smart label designed by the Southern Railway. "